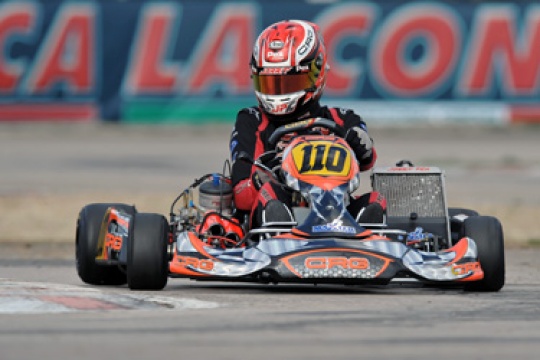 CRG Racing Team went to the La Conca meeting at the end of February with several young drivers, who were eager to take advantage of the immense experience of the Italian team to emerge in a very important international context.

"CRG has always been able to rely on valuable drivers to reach its goals and enhance the performance of its equipment, but our make has also constantly supported and trained young drivers. Some of these drivers remain in karting, while others turn their attention to car racing. In any case, we try to make them improve in all areas: driving, technique and strategy", said the team manager of CRG Racing Team.

KZ: Private Drivers Take the Lead
KZ1 and KZ2 drivers were together in the same group and had to struggle on several occasions against highly changing weather conditions. For CRG chassis, it was an opportunity to show their full potential on track, both in dry and wet weather conditions. Some drivers had Maxter engines, while others had TMs, but they all achieved excellent results. In KZ1, Jorrit Pex (CRG Holland) concluded Saturday's final in 4th place. He was 3rd on Sunday, after the heats, but he was not equally successful during the decisive race. In KZ2, Daniele Delli Compagni reached the third step of the podium on the first day and concluded in 4th place the following day, ahead of another CRG driver by Leonardo Fuoco.

KF: Verstappen's Show
The heavy rain that fell in Southern Italy made the work of drivers and teams considerably more complicated. In KF2, for example, Russian Ivan Mikitchenko as well as Italian Alessio Profeta, at the wheel of his LH, would have preferred a less difficult track and are already looking forward to their next race. In KF3, Dutch Max Koebolt (CRG-Maxter) staged one of his most exciting recoveries, from 67th to 28th. That means he went up 39 places! Another CRG chassis also put in a noteworthy performance with a furious recovery by Max Verstappen. 20th at the start of the final, he brilliantly went up to third, with the best lap time in his pocket too!

60 Mini: CRG on the Podium
Eliseo Martinez: the name of a Spaniard to remember! He won a heat on Saturday, but did even better the following day. With a CRG chassis perfectly fit for this category of very young drivers, he ended 2nd in the pre-final and 2nd in the final, with best lap time in race. A special mention for Hugo Hakkinen, son of double F1 World Champion Mika Hakkinen and finalist in La Conca, who raced with a CRG chassis in the T3M Sport team.