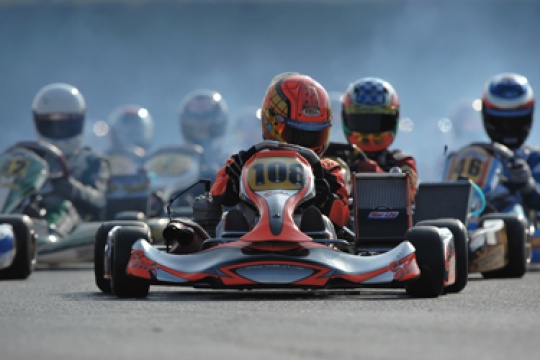 Top-level performances, highly effective training sessions, and a busy international calendar: the Sodi Racing Team has everything ready to leave at the conquest of victories and titles in 2011. The recent Winter Cup has provided convincing evidence of the competitiveness of the official team and of Sodi drivers in general.


Thanks to in-depth preparation that started in 2010 and continued during interseason, Sodi chassis offer today an exceptional performance level and the development of famous «Tekneex Tube Technolog» has enhanced Sodi advantage in this field even more. The international season warm-up round has just provided a resounding confirmation of all this in Lonato, the Italian reference track. Until the Winter Cup, nobody had seen so many Sodi karts achieve such brilliant performances in all categories!

In KF, the rock-solid partnership with engine manufacturer Iame has been fully rewarded and allows SRT drivers to focus only on their objectives. Alex Baron, magnificent during the whole week, provided a textbook performance by climbing on the third step of the final podium in KF2, after concluding timed qualifying in second place and winning 3 qualifying heats and the pre-final! Charles Leclerc was heading in the same direction in KF3. Indeed, he was poleman and winner of 3 heats before a valve breakage disrupted his plans in the pre-final, but despite all this the Monegasque driver was able to recover 15 places in the final and concluded 8th at a wild pace…

Anthony Abbasse contributed to these very positive performances with a remarkable race in KZ2, despite a series of mishaps on track. After a heat victory and a 20-place recovery in the pre-final, Anthony proved he had all the means to aim for the podium. The Sodi clan was also particularly pleased with the excellent performances shown by the group of private drivers who brilliantly defended Sodi colours at the highest world level.

During this meeting, SRT fine-tuned its strategy and programme for 2011.

At team level, Anthony Abbasse, holder of the French Champion title, was naturally confirmed in his role of lead driver in KZ.
In KF1/KF2, Alex Baron joined his Equipe de France team mate, Anthoine Hubert (who unfortunately was not at the Italian event due to an injury after some very promising tests), while Loïc Réguillon will soon join the group to bring all his experience to the team. In KF3, Charles Leclerc's mission will be to try and win some important titles for his team, after a very promising first season.

The official team's programme will focus on the French GPOs, the WSK Euro Series, the Monaco Kart Cup and, of course, some CIK-FIA races: European Championships and World Cups for Abbasse in KZ1 and for Leclerc in KF3, World KF1 Championship for Réguillon, Baron and Hubert - the latter two will also enter the U18 World Championship. Quite a challenging programme for SRT, which defines the team's course of action and goals!

«The technical team has worked hard for two years to reach the highest level. We have started the 2011 season with some assets that allow us to aim for important victories. We are determined to do everything to take advantage of the maximum of opportunities. We have helped our drivers achieve progress and we have improved the functioning of the team, too. I am also extremely satisfied with our collaboration with Iame in KF and since our chassis could not be more ready, I must humbly confess that I am really confident about the future!»