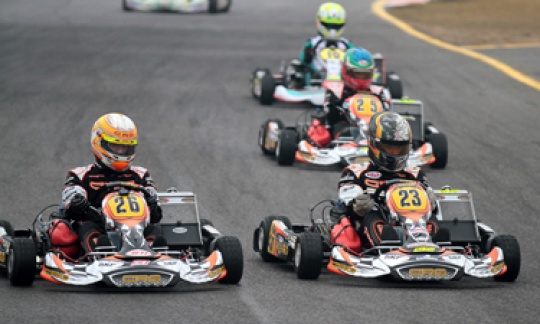 In the first race, which anticipates the season of the international championships, the CRG-Maxter official team gathers good results and useful technical indications.
In KZ2 Thonon and Kozlinski confirm to play a leading role. Good debut for Torsellini.
In KF3 Max Verstappen achieves the second place after dominating the heats.

The start of the pre-final of the Winter Cup of Lonato with Thonon (right) and Kozlinski ahead of Torsellini.

Lonato del Garda (Brescia – Italy). CRG takes stock of the first positive results achieved by its CRG-Maxter official team in the 16th edition of the Winter Cup of Lonato, the classical international race at the beginning of the season, where the all the world of karting starts to verify the potentialities of teams and of constructors just before the forthcoming racing season. It was a good test and a challenge that CRG faced, as usual, with the utmost attention to the details, putting at the disposal of its drivers all the technical breakthroughs developed on the CRG chassis and on the Maxter engines.
Interesting results came unfailingly from the most professional category, the KZ2, where CRG’s champions Jonathan Thonon, Arnaud Kozlinski and Davide Forè, had the young and promising Mirko Torsellini by their side, at his debut for the Italian constructor. Well, the results were quite positive throughout the whole weekend, with CRG once again among the best of the category.It was a pity that the inconstant weather conditioned the race on Sunday, levelling the real values of the teams on the track. CRG’s “all-black” drivers, until then, had performed excellently both in the time trials and in the heats: the final ranking of the 16th Winter Cup could have been different. 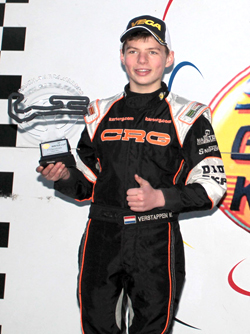 More or less, all the standard-bearers of CRG managed to stand out, starting from Arnaud Kozlinski, who - with an overall third place at the end of the qualifying heats (with a win) - confirmed the good set-up work the French driver made on the Maxter engine. As usual, also Jonathan Thonon (fifth) stood out in the qualifying heats and was ready to play a leading role in the final as well as the surprising Mirko Torsellini, the real revelation of the weekend for his being always with the fastest drivers and, eventually, achieving an overall 8th position. On the other hand, David Forè was a bit unlucky: two crashes pushed him back and obliged him to take part in the second-chance heats, where anyway he classified second.
So, the light and occasional rain which started to fall just few minutes before the start of the pre-final was decisive: those who risked the slick tyres made the right choice; those who preferred the rain tyres, such as CRG’s drivers, paid dear for their choice. In fact, after Thonon’s outstanding start, who took the lead followed by Kozlinski and Torsellini, CRG’s drivers’ ride ended right when the rain ceased to fall and the asphalt dried, allowing the drivers with slick tyres to prevail. In the final, under the rain, Thonon got the best result with a fourth place achieved fighting inch by inch with his totally worn out rain tyres. Kozlinski ended up eighth after being touched in the rear, Forè and Torsellini were knocked out by a crash.
Nicol Tinini, talking about the final phase, says it right: “in the KZ2 pre-final, all our drivers preferred to mount rain tyres thinking it would rain more and more. On the contrary, the track got dry very soon. Moreover, they found themselves in the final with worn out rain tyres. This time we didn’t have any luck at all.”

CRG was able to do much better in KF3, thanks to Max Verstappen who went on the second step of the podium of the final (raced under the rain) after dominating the qualifying heats. Also the young Dutch Max Koebolt and the Chinese from Hong Kong Jacky Chan ran for the colours of CRG official Team. Both of them stopped after the qualifying heats, but showed good progresses anyway.
In KF2 Andrea Dalè fought well. After a good second place in the first heat, he was involved in some contacts and ended up in the second-chance heats where he placed second. Then, in the rainy final, could not do any better than a 21st place. The Russian Ivan Nikitchenko was slowed down by several accidents and in the second-chance heats placed 16th and could not be admitted to the final phase. However, the Russian driver showed to be endowed with excellent potentialities. 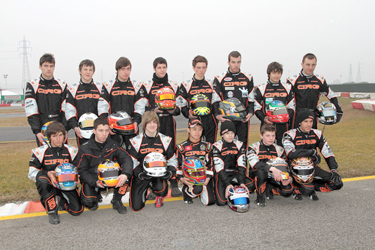 Top, Verstappen on the KF3 podium. Above, all the CRG’s drivers,
both official and private, present at Lonato for the 16th. Winter Cup.

THE INTERVIEWS
Giancarlo Tinini, CRG SpA Chairman: “This first meeting of the season went quite well. We needed to test some solutions and we were looking for positive confirmations. The weather didn’t help us for Sunday’s final races, but what counted for us was verifying some technical evolutions. Our official season starts in about a month with the WSK Euro Series and it continues with the CIK-FIA Championships. We are getting ready to express all our potential in these meetings.”

Jonathan Thonon (KZ2): “We had a week with ideal weather conditions until Sunday, when the rain arrived. In the pre-final, with the track getting drier, I managed anyway to arrive first among the drivers with rain tyres. We decided to start with rain tyres because we thought it was too dangerous to run with slick tyres. A minute after the end of the race it started raining again: if it had arrived a minute before, we would have had a totally different result. Then, in the final, with worn out tyres, from the 11th place I managed to reach the 4th place: not too bad, after all.”

Arnaud Kozlinski (KZ2): “I’ve started the development of a new Maxter engine not so long ago, but I’m rather satisfied for the results we got. I got the fourth time in the trials, in the heats I got a win, a third and a fourth place. After all it wasn’t this bad, also because I was able to fight immediately for the first positions. This is a good signal for the future: the Maxter technicians have worked really well.”

Davide Forè (KZ2): “In the trials, until Thursday evening, we worked very well and there were all the makings of a good result. Then in the heats I got involved in a couple of accidents which made the situation really tricky. In the final, despite the tyres which had been worn out during the pre-final, I was eighth in the first lap, but one of my rivals crashed onto my kart and my Winter Cup ended on that moment. Anyway, I feel confident for the forthcoming races.”
Max Verstappen (KF3): “After doing really well in the trials and in the heats, under Sunday’s rain we couldn’t find the right set-up for the chassis. Anyway, I feel relaxed and confident about the season which is just about to start.”


CRG SpA
Press Office
www.kartcrg.com
All the results on the website www.southgardakarting.it