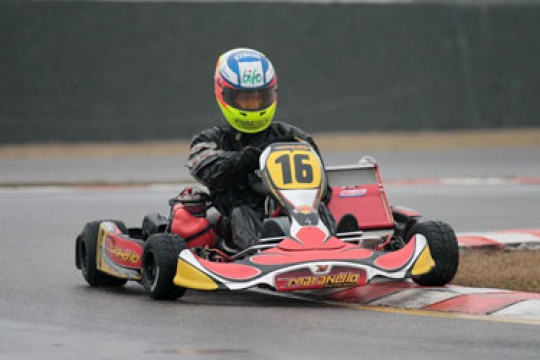 The rain made the final races of the 16th Winter Cup more eventful than expected.
In KZ2 Tony Kart swept the board and occupied the three steps of the podium. In KF2 Maranello won despite forecasts; in KF3 Energy got payback for the delusion in KZ2.

Lonato (Brescia - Italy), 13th February 2011. The 16th Winter Cup opened the International kart racing season according to forecasts and expectations: on the South Garda Circuit of Lonato the 248 drivers fought toughly to achieve the win in every category, which made the results quite uncertain until the end and all the protagonists were willing to take centre stage.
If the major constructors and the top teams were waiting for this race to verify their potentialities, they managed to get almost all the answers they needed, including some indications about weather change. In fact, the weekend of Lonato was particularly rich of weather changes: from the sun on Friday to the fog on Saturday and, eventually, the occasional showers on Sunday. 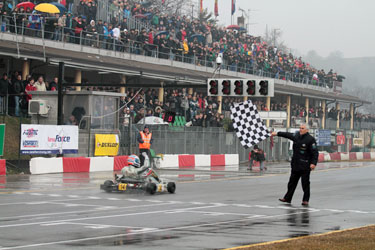 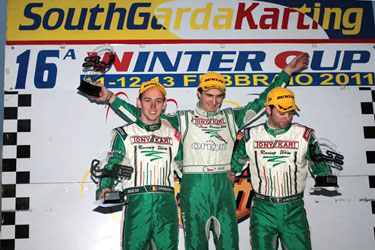 Above, Hajek arrives first in KZ2 and, right, KZ2 podium.

It was the rain which made possible some unexpected results, such as Tony Kart’s “hat trick” which brought on the podium of the top category – the KZ2 – the Czech driver Patrick Hajek who arrived just ahead of his teammate, the Belgian Rick Dreezen and the Italian Marco Ardigò. The excellent result was achieved partially despite the forecasts which, just before the race, said that the win would be a private matter between CRG’s and Energy’s drivers. The choice of the tyres in the pre-final was fundamental. Those who risked and decided to start with slick tyres when it had just begun to rain were eventually right, because the track dried quickly. So, in the final, this time with incessant rain, they were able to start with brand new rain tyres while the others had to use worn out sets of tyres. It was Hajek and Dreezen’s winning move. The third step of the podium awarded Ardigò’s tenacity, as well as that of Jonathan Thonon (CRG-Maxter) was awarded with a fourth place. Just a bit of disappointment for Paolo De Conto (Energy-Tm), who was rather brilliant during the heats and won the pre-final with slick tyres, but was then caught up in the tussle of the final on a track made slippery by the rain: he placed fifth, ahead of Ben Hanley (Maranello-Maranello) and the pole-man Joel Johansson (Energy-Tm). The world champion Nyck De Vries (Zanardi-Parilla) achieved a good performance, but he was rather far from the first positions and finally placed 15th.
In KF2 there was a even more surprising final. The qualifying heats had already made clear that there were many drivers who could put their hands on the win; but eventually all of them were outdone in the final by the skilful Finnish driver Teemu Suninen, who used all his talent on the slippery track of Lonato. He was only 17th after the qualifying heats, but under the rain he achieved an outstanding win for his team Maranello. The other two steps of the podium went to the English Mark Litchfield (FA Kart-Maxter) and the French Alexandre Baron (Sodikart-Parilla), the latter among the best after the qualifying heats. 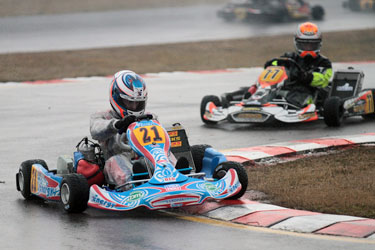 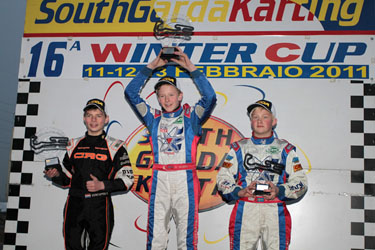 Above, Olsen ahead of Verstappen in KF3. Right, KF3 podium

The other protagonist of the heats, the English Max Klinkby-Silver (Birel-Bmb) was obliged to retire. The best Italian drivers were Stefano Cucco (Birel-Parilla) and Antonio Giovinazzi (Pcr-Parilla), fifth and sixth respectively.
In KF3 too it was a driver from Northern Europe to go faster on the wet track. Here the win went to the Norwegian Dennis Olsen, who had his payback after Energy’s disappointment in KZ2. There were many expectations for Max Verstappen (CRG-Maxter), who dominated the qualifying heats, but the young Dutch driver, son of the former F1 driver Jos Verstappen, had some troubles from the set-up of his kart on the wet track. However, Verstappen achieved an excellent second place, just ahead of another Energy’s driver, the Swedish Robin Hansson. A series of misadventures stopped the local “idol” Luca Corberi (Tony Kart-Vortex), who fell victim to the slippery track after placing fifth at the end of the heats.
Another expected protagonist failed to qualify for the final phase of this meeting: the rising star Lance Stroll (Zanardi-Parilla). Anyway, his debut in KF3 was not unnoticed. He showed his excellent fighting qualities, but unfortunately two crashes during the heats put him out of a final he would have deserved to run. It is a real pity, because even Alessandro Zanardi came to support this young driver (who recently joined the “Ferrari Driver Academy” programme). There will be soon another occasion by the end of the month of February, with the WSK Master Series of Muro Leccese.