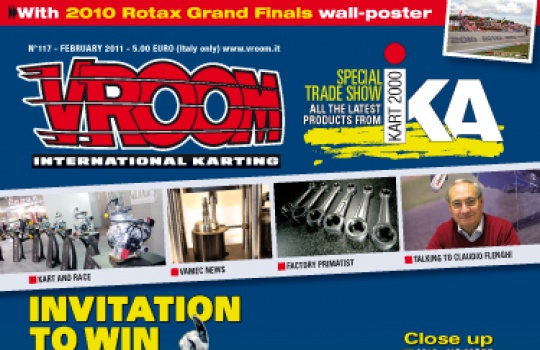 Stop, just for a second, and do everything you can to get a copy of February issue, if you don’t have a subscription yet. Trust us when we say that this is an issue you cannot miss! And from now on, it will be even easier to get Vroom. It no longer matters if you are in Europe, Asia or America. Now you can get hold of Vroom for your iPad in HD at only 2.90 euro – or 29 euro for 12-issue subscription.
To see what you can’t miss this month, check the Contents inside

2010 ROTAX GRAND FINALS MAXI POSTER
BRP-Rotax celebrates all participants to the 2010 Rotax Grand Finals with a Maxi Wall-Poster, especially made by Vroom. If you are one of those participants, a friend or family member, or simply a Rotax fan, this is a perfect way to remember the 2010 record-breaking edition of the Olympics of Karting 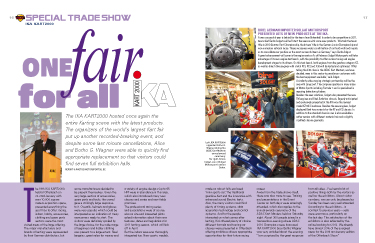 SPECIAL TRADE SHOW – IKA KART2000 Offenbach
The IKA KART2000 hosted once again the entire Karting scene with the latest products.
The organizers of the world’s largest Kart fair put up another recorded-breaking event, and despite some last minute cancellations, Alice and Botho G. Wagner were able to quickly find appropriate replacement so that visitors could find seven full exhibition halls. 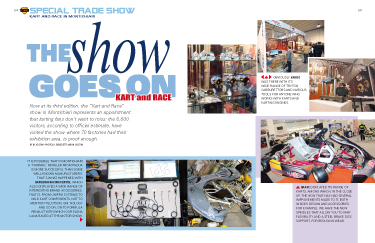 SPECIAL TRADE SHOW – Kart and Race in Montichiari
Now at its third edition, the “Kart and Race” show in Montichiari represents an appointment that karting fans don’t want to miss: the 6,600 visitors, according to official estimate, have visited the show where 70 factories had their exhibition area, is proof enough.


FACTORY – Primatist
The factory in Brescia stands out for its success mainly in manufacturing components for kart engines (and not just those): making connecting rods and driving shafts thanks to production quality and flexibility. Let’s take a closer look and see.


TALKING TO – Claudio Flenghi
We had a long talk with TM owner, Claudio Flenghi and went with him back along memory lane, a long trip back to the past and then discussed today’s national and international karting and what the future holds in store for us.


RACE REPORT – Rotax Invitational Race
The one-off international event recognised by Rotax and promoted by KRS Motorsports, attracted 113 drivers spread across 4 categories. It’s a great way for drivers in the region to kick-off their karting season when there aren’t many other races being held. 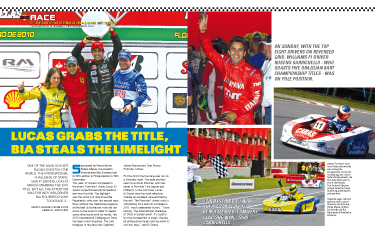 RACE REPORT – Desafio Internacional das Estrelas
One of the main go-kart racing events in the world, the International Challenge of Stars, saw F1 driver Lucas Di Grassi grabbing the 2010 title. But all the attention was for Indy girl-driver Bia Figueiredo who took race 2...


CLOSE UP - As from 2012 no separate front brakes
This had been in the air for a long time, but now, even if not officially announced, it is practically a certainty: the Cik-Fik will no longer accept to homologate rear brakes with manual control on the steering wheel, like the ones now usually used for the KF classes except for KF3, where the discs are not allowed.


VINTAGE – Tecno Kart Bultaco 125 1964
The Tecno Bultaco 125 in these pictures is the kart with which Decio Sordini grabbed the Italian 125 World Championship win in1964. Here is its history… 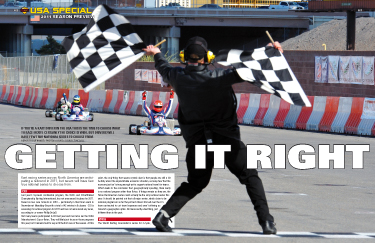 NATIONAL RACES
Not much racing at this time of year, so we kick off with a special preview of US 2011 season to help drivers Getting it Right! Also from Australia, we present a preview of the CIK Stars of Karting Series to come... last but not least, Japan’s Rotax Winter Cup, a good national event at its second edition that saw the presence of Euro stars Ed Brand and Martin Pierce. 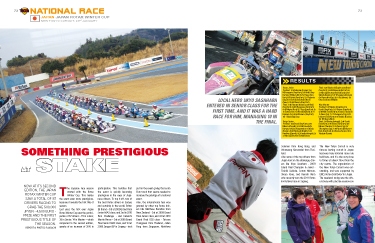 COLUMNS – Mondokart, 2011 National & International racing calendars
The news section opens with the annual CIK-FIA Karting awards, this time held in Paris near FIA headquarters, with a special feature on Beitske Visser who was given the award as Best Woman in Motorsport by the ‘FIA Women & Motor Sport Commission’.
Next up, an innovative feature by DR racing, which has come up with a new adjustable wheelbase. Also, very nice comeback in the karting scene, with Giancarlo Vanaria presenting his VSK chassis.
Last but not least, our usual appointment with dates and venues: the complete 2011 racing calendar of 21 countries from the 5 continents, and the updated 2011 International calendar.