Author: Vroomkart International
Joakim Ward, Ward Racing Team owner and manager dedicated his life to karting. Not so much a job but rather a life-long passion, dedicated to preparing drivers for their future career in motorsport.
Report S. Murtas / Photos C. Avolio

Reserved, focused, frank. Joakim Ward, Ward Racing Team manager and owner, has been in karting for most of his life. “I’ve never had a normal job – says the young team manager. When I was at school I was a kart driver. Then I went into car racing, and straight after I set up this business, my passion! It took me and my wife two years before we could live off it, but karting has been my life ever since I can remember, because this is what makes me happy.”

Which was your best result as a driver?
“In karting I managed to finish 7th in the World Championship in Laval in 1988 as a private (Dino/Rotax). Then in 1989 I finished 3rd at the European FA Championship in Jesolo. Then I won the Swedish and Scandinavian Championships. In my career I raced almost 200 races, winning about 50 of them. In all categories I always managed to get decent results, even when I was involved in car racing, although my career was not very long. I raced the Formula Renault 1.7, and I still managed two pole positions and a win, and I finished 6th in the championship. At that moment I thought I knew everything, I could drive the car well and there was no limit to my potential. In fact that wasn’t true. With maturity I understood I reached my full potential as a driver, but I’m happy of my career as a driver because I’ve given everything I had. I’m not that big-headed to say that with a bigger budget I could have made it to Formula 1, because there are so many steps you have to go through, and money isn’t the only variable. Probably I could have done well up to Formula 3, but I don’t think I was good enough to make it into the top of 4-wheel motorsport, which is F1 of course! At the end I knew I achieved the most I could, and this is what we try to teach our drivers. The most important thing for a driver is to work hard to reach his full potential. Each driver is different, and everyone has different capabilities, and the timeframe in which every driver expresses its full potential varies. We work with our drivers so they make the right steps at the right time. Then of course they take their own decisions, but our advice is always based on what’s best for each individual driver.” 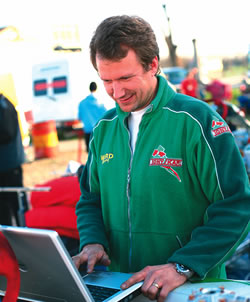 During your career as team owner you had some interesting drivers under your tent...
“In 1991 I started the team with a couple of drivers. When we started our goal was not to become a big team, but to enjoy karting and educate and teach our drivers for their future career. In the past 15 years we grew and got some very good results, and with them we started getting more clients/drivers. Initially we had a certain Johan Agrell with us. In 1993 he finished 2nd in the World JICA Championship (then called the Five Continents’ Cup Junior A) in Genk. In 1996 he took Final 1 win at the opening round of the European FSA Championship in Lonato. More recently, in ‘99 Stefan Sodergberg won the Winter Cup in Junior class (today races Touring cars), and these experiences helped Ward team grow little by little. Then of course in 1999 and 2000 we had Heikki Kovalainen with us, and before he went on to race Formula cars he won 2 European FSA Championship Finals, finishing 3rd overall in 2000, and also won the Nordic FA Championship. I managed to help him, thanks to a friend of mine who has a good Formula team in the UK, in his early steps in Formula, and later he ended up with a contract with Renault. Our latest success, 2006 European ICA Championship, with Johan Jokinen taking 3rd place in Ampfing. Today in some occasions we probably have too many drivers to follow, but this is indicative of the fact that we do work well. We always try to make sure our clients get a top service, and that everyone has the same opportunity. If they are happy, we are happy to serve them...”