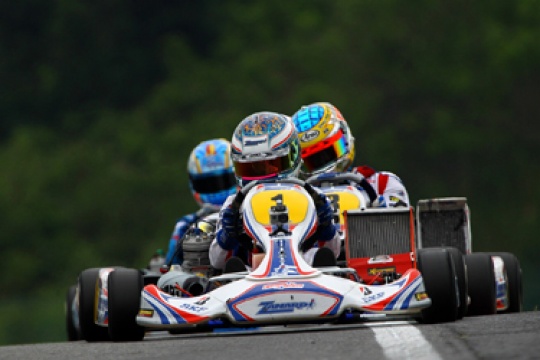 2011 CIK-FIA World Karting Championship (KF1)
The CIK-FIA Karting World Championship is getting ready for a new take-off. In 2011 it will adopt new technical regulations and a new format.

Introduced in 2009, the Super KF category will only have lived for two years, a victim of too liberal engine regulations. Switching back to a more accessible type of engines showed the way in Spain in September 2010 at the last World Championship: for lack of a sufficient Super KF field the CIK-FIA had to find an alternative solution and opted for the well-tried definition of KF2 engines. This choice proved so judicious that the event enjoyed an entry list with no fewer than 125 Drivers.

Further to negotiations with a panel of major Manufacturers, upon their proposal it has been decided to reserve the 2011 World Championship for a new version of KF1, which will have free chassis & tyres and with KF2-type engines.

“This technical definition has several important advantages”, explained Shaikh Abdulla bin Isa Al Khalifa, President of the CIK-FIA. “The experience of the 2010 World Championship speaks for itself: uncertain in Super KF, the field considerably got thicker when it was announced that the event would be held for KF2s. The engines of the latter karts are more accessible, less costly and much more widespread as they are also used in the ASNs’ national Championships. The solution retained with this redefinition of KF1 suits the largest number of parties involved: chassis and tyre Manufacturers, who still have a good room for manœuvre to develop their products, engine Tuners, who are still in with a say in the matter – which was not really the case any longer with the too specific SKF engines –, and private Drivers, who still stand a good chance of winning even against works Drivers.”

With this new kick-off, the CIK-FIA will reintroduce a World Championship held over several events and has resolved to regroup the former European Championship and World Cup in Japan under the same World Championship label. In 47 years of history, the Karting World Championship was organised over a series of events only 6 times. It was from 1966 to 1969, as well as in 2001 and 2002. While the formula of a World Championship held in a single event has indeed its own virtues, the series format will enhance to a larger extent the Driver who ends up winning it. The programme of the year 2011 comprises a total of 5 events, with a very prestigious opening at Suzuka, in Japan (22 May), followed by stages in Germany (Wackersdorf, 12 June), Spain (Zuera, 24 July), Belgium (Genk, 4 September) and Italy (Sarno, 18 September).

“The idea is to reinforce further the impact and value of the World Champion title”, Shaikh Abdulla continued. “Each event will be composed of 4 races with points allocated, and the Driver who eventually wins it is bound to have had a strong season. The Championship will also be reserved for a maximum of 34 Drivers. Only the Japanese event will benefit from ‘‘wild cards’’, aimed at encouraging Asian participation.”

Revealed by the World Council on 3rd November, the new technical & sporting format of the World Championship has immediately aroused the interest of the most ambitious Manufacturers, Teams and Drivers. The reigning World Champion, Nyck de Vries, will be present.

“I am very much interested by the dimension of this Championship”, comments the Dutch Driver, “and it will even further enhance the Drivers’ sporting achievements. I fully support it. Although I won in 2010, the idea of landing another edition of the most official and renowned Karting Championship is a huge motivation for me, especially in this new context! In 2011 I shall remain completely focussed on Karting and have every intention of enriching my experience before switching to automobiles.”

With the participation of the major Manufacturers, the interest shown by semi-official or private Teams and the fact that the most competitive KF2, KF3 and U18 Drivers in 2010 confess that they have a fad for this Championship, there should definitely not be a lack of applicants for the 34 available places! The opening date of entries is scheduled for 20 January 2011.