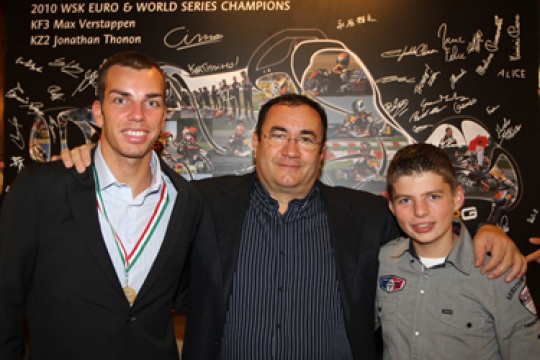 CRG PRIZE-GIVING CEREMONY – LONATO, 3rd DECEMBER 2010
Celebrations for the two WSK World and Euro Series champions, with Thonon winner in KZ2 and Verstappen in KF3, besides Nato winner of the Monaco Cup in KZ2. A new Crg Junior team for Asia was announced. It will be managed by the Malaysian team  “Iru1 Motorsports”


Desenzano del Garda (Brescia – Italy). It was a beautiful celebration that of the annual prize-giving ceremony organized by CRG. There were more than 150 guests in the cosy halls of the Hotel Rustichello, all ready to applaud and cheer the champions of the Italian constructor for the important achievements of the sports season which has just ended. The traditional appointment confirmed once more that all the men and women working for the prestige of the Italian constructor are still very close to the colours of CRG, especially in a very demanding year both for the sports engagements and for the logistic and industrial ones because of the removal in the new company buildings. During the prize-giving to the CRG Group, there was the official announcement of the creation of a junior team for Asia which will be managed by the Malaysian team “Iru1 Motorsports” of Nik Iruwan and Idzham Mohd Hashim. The CRG Junior Team Asia’s aim is to train talented drivers of Malaysia and, in general, of Asia in order to face International competitions in the best possible way.

Several personalities of the world of karting and of the press took part in the convivial meeting, besides the major dealers of the CRG Group. Of course there were al the drivers and the technicians who contributed to make of CRG a winning brand on the tracks of all around the world.
Most of the applauses went to the two champions Jonathan Thonon and Max Verstappen, both winners of two International championships: WSK World Series and WSK Euro Series in their respective categories KZ2 and KF3. They were given a precious gold medal.

Great appreciations were expressed for all the other CRG drivers who contributed to put the CRG brand among the top world constructors. Drivers such as the young Lorenzo Scatà and Nicola Nolè were awarded a gold medal for their wins in the 60 Mini and the KZ2 of the Open Master Italian Championship respectively; Norman Nato was given a prize for his success in the KZ2 of the Monaco Kart Cup CIK-FIA.
Other prizes were given to the others drivers who took part in the international sports season: Eddy Tinini, Davide Forè, Arnaud Kozlinski, Felice Tiene,“Speedy”, Giovanni Martinez, Daniele Delli Compagni, Mirko Torsellini, Mario Ziletti, Luca Tilloca, Fabian Federer, Kristijan Habulin, Alessio Profeta, Mario Runchina, Sebastien Segond.
A prize went to all the mechanics who assisted the Official Team, to the engine technicians and to the engineer Marco Urbinati.

A special prize was dedicated to the world podium of the major CRG brand dealers. The first place in this particular and important ranking of the Best Dealers was achieved by Canada thanks to the “PSL” firm represented by Stephan Charles. France got the second place by the skin of the teeth thanks to the dealer “KCM” represented by Christian Marchandise. Third place for Germany with the dealer “Prespo” (represented by Manfred Brandl).

This is Giancarlo Tinini’s comment (chairman of CRG S.p.a.): “This prize-giving ceremony was a beautiful event. It is always a good thing to meet all the supporters of our brand and all our friends. It is a pleasure to award the drivers, but I like this occasion in particular because we can stay all together to celebrate. It is as well an ideal occasion to award the work of our dealers. This year our three first prizes for the dealers were given in three different markets, which have been playing an important role for us for a long time. Canada, with PSL, achieved the best performance, arriving just ahead of the French KCM, that has been a top seller for years. Germany, with Prespo, got the second place for the second year in a row, confirming a very positive trend. About our international champions I can say that Thonon confirmed his talent this year too, while Verstappen is the strongest junior driver in the world. Regarding our 2011 schedule, we will officially take part in the WSK Championship as well as the World and European CIK-FIA championships, besides some other events.”

Here the comments and the expectations of some among the major protagonists of the season:
Jonathan Thonon: “I am very happy for the two titles I got in KZ2 in the WSK World Series and WSK Euro Series. It was a beautiful season and I want to say thank you to all those who gave their contribution for my success, first of all Giancarlo Tinini. Next year I will follow the International CRG schedule in KZ1, where my only target will be the win.”

Max Verstappen: “We weren’t expecting such a good result at the beginning. Then, after the success in the first race of La Conca in the WSK Euro Series, we understood we were strong and we could try to get the title. And we made it! I won the KF3 championship both in the WSK Euro Series and in the WSK World Series. Then I got my kicks out of the CIK-FIA races. I placed second in the KF3 world cup and fifth in the European Championship, but on these two occasions too I had been battling for the win. I’ve just turned thirteen and next year I will be racing in KF3 again, and I’ll try to do even better.”

Davide Forè: “I’ve just come back from Brazil where I took part in a 500 Miles. I got the fastest lap and I placed sixth with my team. For me the season ended well in the WSK World Series with the second place in Egypt in Super KF, behind my teammate Kozlinski. Next year I should run in KZ, and I do think that CRG will be the team to beat once more.”

Arnaud Kozlinski: “This year I had a good start in the Winter Cup, then we remained a bit behind in Super KF and it was hard to make up the lost ground. In the WSK World Series I got a penalty in Portugal and I had a crash in the American race, otherwise I would have been fighting for the title given my win in Egypt. For next year, as well as all the professional drivers, I will race in KZ, where I will use an engine set up by Maxter directly.”

Felice Tiene: “This year my come back to CRG was absolutely positive, both for the new category I run in- the Super KF - , and for the results I got. In the whole I consider myself very satisfied, even though on some occasions I might have given another impression. For me all the races I took part in were positive and interesting experiences. Run against great champions helped me to understand my mistakes. Next year I will run in KF1 in the WSK and in the CIK-FIA World Championship.”

Eddy Tinini: “For me it was a bit hard, but I’m already thinking about next year, when I will be probably run in KZ. I’m training a lot in this period, but KZ is a totally different category from KF. Apart from the gear shift, the differences are substantial: from the braking to the trajectories. Probably I will be able to come in handy for Felice Tiene in KF1, and that’s why we are still thinking about my definitive next year’s engagement.”

Norman Nato: “This year, because of my commitment in car racing – where anyway I was the runner up in the Formula 4 Eurocup European Championship – I took part in only two races in karting, getting the second place in KZ2 in the WSK Euro Series of Lonato and a beautiful win in the Monaco Cup. Moreover I managed  - together with Koko – the T3M Team, that made Hugo Hakkinen run in the Mini, Sebastien Segond and Pierre-Louis Loubet in KF3. For next year I haven’t decided what to do yet, but I’d like to run with karts again.”