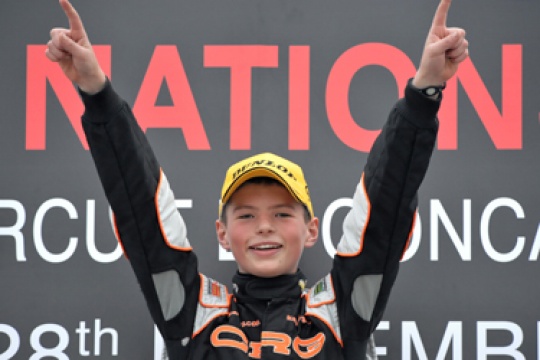 The CRG company had two very intense weeks on the La Conca circuit. The Italian brand was the official chassis supplier of the Rotax World Final and then continued with the WSK Nations Cup organised a week later, from 26th to 28th November. At the wheel of his CRG-Maxter, Max Verstappen (KF3) concluded triumphantly a 2010 season crowned with success.

Max Verstappen was probably the best 2010 driver in KF3. The young Dutch driver, who won the WSK World Series and the WSK Euro Series, was second at the World Cup, 5th at the European Championship and 2nd at the Winter Cup, has always been able to battle for victory or a podium in each race he entered. His victory at the WSK Nations Cup has done nothing but confirm the talent of this driver and the extraordinary competitiveness of his kart. Max admitted it. "It would have not been possible to achieve such results without a chassis effective in all conditions and a very competitive engine. From the very moment I tested the new Maxters (CIK homologated in 2010), last winter, I knew I was going to be fast during the season".

Two elements prove the huge potential of the CRG-Maxter chassis. On the one hand, Max Verstappen did not just add another victory to his list of achievements. He also dominated the race. After conquering the pole position on a wet track, he also remained unbeaten in the qualifying heats: four victories out of four. And both in the pre-final and final, he crossed the finish line as winner with an advantage of almost four seconds, thanks to a very fast kart from the first to the last lap!

On the other hand, Max's CRG-Maxter is not the only to show great performances. His team mates Antonio "Speedy" Fuoco and Pierce Lehane did not go unnoticed during the qualifying heats, at the end of which there were three CRG-Maxters in the first four places! After winning three heats, Italian Fuoco lost his podium chances in the pre-final, when he was penalised for crossing the track while trying to return to his place. As for young Australian Lehane, he did not expect to reach such a good position, considering his lack of experience at this level. Recently third at the World final of the Rotax Junior category, he was not equally successful on Sunday afternoon, though he will not regret this race within CRG official team.

Italian Mario Ziletti in KF2 and Dutch Jorrit Pex (KZ2) also wore CRG-Maxter colours in La Conca. The latter flirted with the podium after climbing as high as fourth in the pre-final. In the final race, Pex kept the same pace as the leaders, with 47"498 (the best lap time was 47"443), but the driver from CRG Holland was pushed in the pack and had to content himself with 8th place.