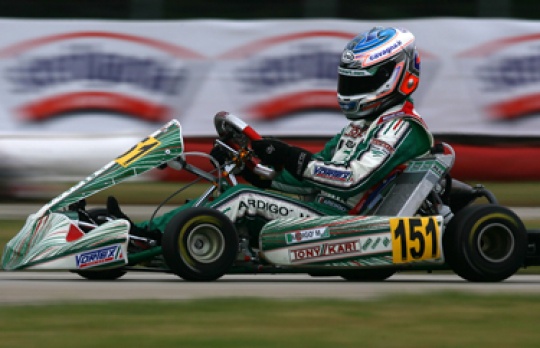 Excellent confirmation of our Racing Team at the WSK Nations Cup in the most demanding category, KZ2, thanks to Marco Ardigò. In seven days only, Racer EVRR chassis, just introduced, have already collected a two-times clear and prestigious success, internationally recognized, on the occasion of the WSK Nations Cup and the Super Nations. This is the award of the whole week for Tony Kart and Vortex engines, in KZ2 category. Moreover with the third position gained by another driver of ours, Rick Dreezen, KZ2 category’s success has furthermore been embellished.

The total success for our colours has been also sealed by the deserved Tony Kart Junior Racing Team’s
achievement, succeeding in the KF2 with Chris Lock.
Since the qualifying rounds, held on a wet track, our materials perfectly worked with Rick Dreezen, author of a perfect pole position, obtained with the time of 1.01.184 on wet track. Prompt confirmation of our materials’ quality are private drivers’ performances, such as Nilsson (Ward Racing), which is for the second time protagonist as well as Gazzurelli, from the homonymous team and sixth chrono. In the top-ten classification we still have the Tony Kart-Vortex of both our Alessandro Piccini and Hajek (Orion Racing Team).

At the end of the qualifying rounds our driver Dreezen proved to be the leader, gaining a double success, a third position and a best lap round. Ardigò powerfully recovers, showing our Racing Team’s most determined and hell-bent side which never gives up and is always ready to promptly react even when troubles occur. During the prefinal Dreezen led the race with no doubts and Ardigò succeeded in his recovery from the last position thus conquering the second row at the grid for the very Final (third position). Considerable were also the performances of Piccoli, sixth in the Final and very fast indeed. The Final gave public and television’s audience, with RAI Sport following the event, great emotions, with not less than three drivers in a tenth competing for the title, during the whole race. Two of those drivers were from our Racing Team, Ardigò and Dreezen.

The competition was then well defined at the end, surprisingly, with Ardigò still at the top, followed by Toninelli and the other Tony Kart-Vortex Dreezen. With this WSK Nations Cup’s success, our Racer EVRR, the last introduced model equipped with interesting technical developments (http://www.tonykart.com/leggi_prodotto.php?ID_prodotto=773&ID_categoria=62), could not obtain better results to be taken into consideration by insiders, furthermore showing off the advantageous developments tuned on the already winning basis.

During the weekend weather conditions were uncertain, with some rain during the qualifying rounds and a wet track on Sunday. Our chassis, both in wet and dry conditions, were always at the top, actually other than the success we also gained the best laps during the race, four times out of five. Besides the already mentioned Dreezen, also Ardigò (two times) and Hajek signed up the best laps. In the KF2 category, too, the top-step of the podium was green-coloured, thank to our Junior Team and its driver, the English Chris Lock. Moreover, our team-partners’ performances contributed to end up this positive weekend, gaining the podium in the KF3 category with Ivanovic (Baby Race) and Beer (War Racing) and the second position of Shwarzman in the 60 Mini category.
RESULTS AT: http://www.wskarting.it/

PROTAGONISTS’ OPINION
Giacomo Aliprandi –Tony Kart Racing Team’s Team Manager
“Winning for two consecutive weekends such prestigious competitions, as the Super Nationals and the WSK Nations Cup, is what we expected to better introduce our EVRR model, the last Racer’s evolution.In KZ category we were fast during the whole season, we always work hard and these victories give us a boost for the next winter season. On next year the category will be even more interesting and we have to be ready since the beginning to face competitive drivers, such as the ones we had here and in the United States”.

Marco Ardigò –Tony Kart Racing Team’s Driver – WSK Nations Cup’s Champion in KZ2 category
“This was one of the most demanding races I have ever attended. We were three and very close to each other and I took advantage of any millimeter of my chassis to gather the victory. Toninelli and Rick (Dreezen) always were competitive and never gave up, and this is another reason for me to be even more satisfied for the success achieved in this WSK race, too. After the carelessness during the qualifying rounds, when I was put last, me and my team never lost heart and worked at our best to recover. Sure, the material, engines and chassis were very competitive and this was a guarantee for that perfect recovery”.