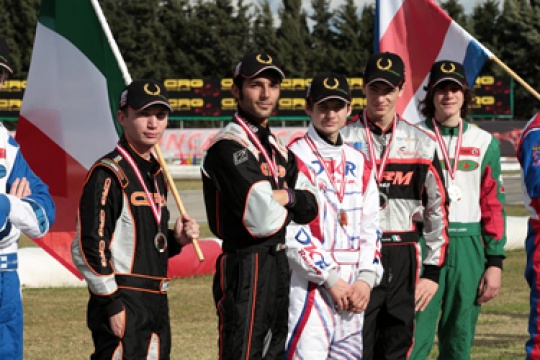 THE WORLD FINAL OF THE ROTAX TROPHY HAD ROSSI AND TOMARCHIO AMONG THE BEST IN THE DD2 CATEGORY. A CRASH IN THE SECOND CHANCE HEAT STOPS THE ITALIAN CHAMPION PAGLIARANI. SCHWARZER AND LAGHI WERE UNLUCKY IN THE JUNIOR CATEGORY. POSITIVE DEBUT FOR ROVERA IN DD2

Muro Leccese (Lecce - Italy), 21st November 2010. The world final of the “Rotax Max Challenge Grand Finals” was once more a great and spectacular karting event. There were more than 205 drivers coming from all around the world in what can be called a real celebration of motor sports, flooded with colours and flags in the wind. A magnificent show which has been going on with growing success since 2000 and that this year – for the second time – had its venue on the international circuit “La Conca”, after the marvelous edition of 2008. There were 252 entrants for the event which took place on the excellent southern Italian track, with all the best protagonists selected from their national Rotax Trophy from all around the world. The drivers were divided into the categories Junior Max, Senior Max, DD2 and DD2 Masters (for drivers over 32 years of age).

The event enjoyed the technical partnership of CRG, which supplied the chassis for the drivers of the Senior Max and DD2 categories, Haase (DD2 Masters) and Sodi (Junior Max).

Our standard bearers performed well, showing an excellent competiveness in every phase and bearing the comparison with top level competitors. Mirco Rossi andFrancesco Tomarchio in DD2 managed to pass the exam of the qualifying heats and entered the final, while the others saw their changes going to pieces during the eliminatory phases, mostly because of unfortunate events.

The driver who recriminated most was the two time Italian champion Pagliarani, who raced in the Senior Max and was pushed out by a crash in the second chance heat, just at the end of the race when he was second.

Schwarzer, in the Junior Max, could not take part in the qualifying time trials because of technical troubles; despite this drawback he missed the second chance heat for only three position, even though he was always obliged to start from the last rows of the qualifying heats. 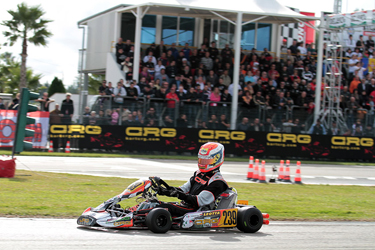 Laghi too was very unlucky: he was bumped twice and then involved in a start crash in the second chance heat.

Rovera ran for the first time in DD2. He tried to make himself respected, showing good skills, but in the end he paid for his lack of experience in this category, so different from his usual Senior Max.

Eventually, only Mirco Rossi and Francesco Tomarchio represented Italy in the final phase of the event, playing a leading role throughout the whole weekend. In the final, Rossi arrived 9th, confirming to be one of the best; Tomarchio placed 14th after recovering several positions.

In the Junior Max, characterized by a breathtaking final, the win in the category went to the Dutch driver

Jordi Van Moorsel, after the Estonian Martin Rump’s disqualification for a technical problem. The second and third place were achieved by the other Dutch driver Joel Affolter and the Australian Pierce Lehane.

In the Senior Max the success was conquered by the South African Caleb Williams, after an arrival which saw five drivers battling for the win. The other two steps of the podium were achieved by the New Zealander Joshua Hart and the Austrian Ferenc Kancsar.

In the DD2, the Canadian driver Daniel Morad won arriving just ahead of the Belgian Maik Barten, after a gripping battle. Third place for the New Zealander Matthew Hamilton.

In the DD2 Masters success for the Canadian Scott Campbell who preceded the Dutch Dennis Kroes and the Swedish Martin Victorsson. The Nations Cup title was won by Spain. Second and third place for Estonia and Australia. The 2011 edition of the Rotax Max Challenge “Grand Finals” will take place in the United Arab Emirates in Abu Dhabi.

These are the comments of the Italian drivers who took part in the “Rotax Grand Finals 2010” of Muro Leccese:

Mirco Rossi (DD2): “This is my third participation in the final of the Rotax Trophy. The competiveness level has raised much: as an example I placed 21st in the qualifications and I was only three tenths of second slower than the first! The organization was just perfect. In the end I’m definitely satisfied with my 9th place in the final”

Francesco Tomarchio (DD2): “This is my first year of activity and I have chosen the Rotax Trophy because it is not too expensive. I’m glad for my first season: I won the Sicilian Regional Championship and I was the runner-up in the Italian Championship. I’ve raced in the Senior Max, but on this occasion I was offered a second chance in DD2 and I accepted. I placed 14th and I’m happy for having recovered several positions. It was a great event and I didn’t think there could be such a good organization.”

Claudio Pagliarani (Senior Max): “This my second participation in a final race of the Rotax Championship. Last year I qualified for the final and arrived 17th, but this year, for just two positions, I wasn’t able to repeat the exploit. That’s a pity, because I felt I was competitive. I had two crashes in the heats which penalized me; in the third heat I placed fourth. In the second chance heat I was second and I could have won but I eventually placed 8th. This year the level was very high and the organization as perfect as usual. This is one of the most beautiful races in the world.”

Christian Schwarzer (Junior Max): “It was a great adventure. I couldn’t take part in the qualifying time trials and so I had to start always from the last rows in the heats. Despite that, I didn’t take part in the second chance heat for only three positions. If I hadn’t had those troubles at the beginning, I’m sure I would have done much better than that: my times were as good as those of the first drivers.”

Filippo Laghi (Junior Max): “It was a beautiful event. It was my third participation and I noticed a very high level of competiveness. In the first heat I did quite well; in the second I had a contact during the start and in the third I placed 23rd. In the second chance heat I got involved in the tussle at the start. It’s a pity. I hope I’ll manage to qualify next year too.”

Alessio Rovera (DD2): “I took part in the Senior Max Championship, but for this race I had a chance in DD2 and I accepted. I liked the fact that everybody started standing the same chances, with chassis and engines directly supplied by the organization. I didn’t get the results I hoped, and anyway DD2 is a totally different category from Senior Max: I wish I had done more tests before this race. The organization was marvelous. I liked very much the Rotax Trophy; the reliability of the engine is excellent.”