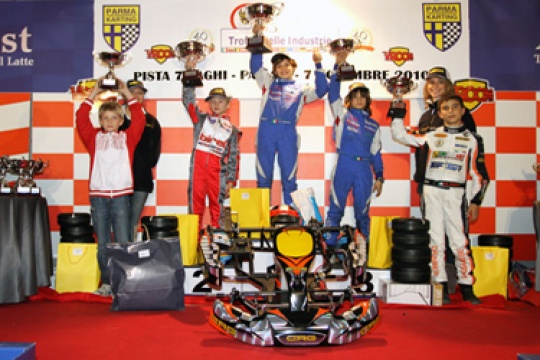 Castelletto B. (Pavia – Italy), 7th November 2010. It was a great sports event. This year too the 40thedition of the “Trofeo delle Industrie” went right on target with an event which is already a cornerstone of the history of Italian karting. Lots of great drivers started their sports career here, and this year too many young drivers showed their potentialities.

In the anniversary of this traditional meeting, which has taken place without interruptions since 1971 thanks to the great organization of Parma Karting, the most sought after prize went to Kevin Lavelli, a young promise of international karting. His name is now on the prestigious list of winners of the event.
His path to the final win was awesome:Kevin Lavelli (Top Kart-Parilla) won the trophy thanks to his great performance in one of the most demanding categories, the KF3. He won over a lot a great group of tough rivals such as “Speedy”, alias Antonio Fuoco (Crg-Maxter), who in the final had to be happy with the second step of the podium. Lavelli achieved a terrific hat-trick: pole position in the time trials, first place in the two qualifying heats, win in the final. 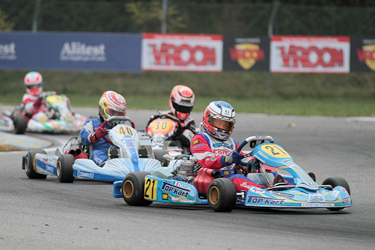 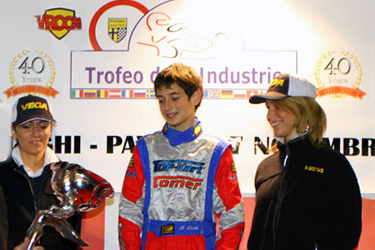 The winner Kevin Lavelli in action.


Always in KF3, at the end of a gripping race, the Danish Slavko Ivanovic (Tony Kart-Vortex) arrived third behind the two main protagonists, just before Stefano Villa Zanotti (Tony Kart-Vortex) and Antonio D’Angelo (Parolin-Tm).
Great show in the races of the KF2 too. Stefano Cucco (Birel-Parilla) MGM Team, eventually, achieved the win thanks to his excellent qualities both on dry track (pole and win in one of the heats) and on a track flooded with water after the sudden rain fallen during the afternoon, right in the middle of the finals. Cucco’s success in the final was undisputable: he got the lead at the beginning of the race and finished arriving before Augusto Di Braccio (Top Kart-Tm) and Vittorio Maria Russo (Tony Kart-Vortex). The fourth and fifth place went to the FinnishJuuso-Matti Pajuranta (Ninar-Vortex) and the Russian Ivan Kosyukov (Tony Kart-Vortex). 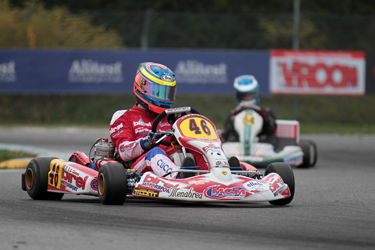 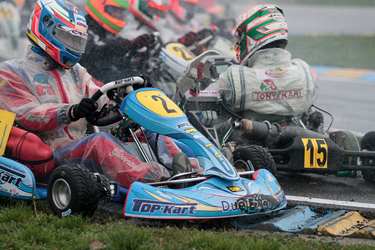 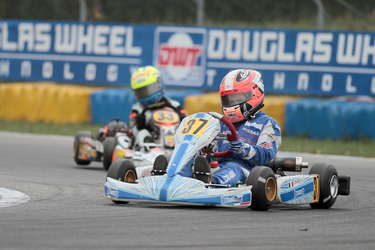 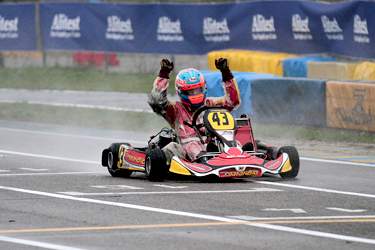 The Polish Jacub Dalewski (Tony Kart-Vortex), winner in the second heat, finished seventh.
On the wet track of the final there were several drivers involved in tricky situations. Among them, Antonio Giovinazzi (Top Kart-Parilla),who arrived eighth.
Very lively, as usual, the 60 Mini. The Lorandi brothers were among the major protagonists in all the phases of the event: Leonardo got the pole position and Alessio a win in one of the heats. The final success went to Alessio Lorandi (Tony Kart-Lke), thanks to an awesome recovery after an unlucky second heat. Alessio won over the runner up, the Hungarian Jozsev Havasi (Birel-Lke), while Alessio’s brother,Leonardo Lorandi (Tony Kart-Lke), managed to get on the third step of the podium after a great recovery from the 17th position. The RussianRobert  Shwartzman (Tony Kart-Lke) recovered up to the fourth place, before Danilo Albanese (Top Kart-Lke) winner of one of the heats, and Angelo Giannone (CRG-Lke).
In the 125 Italia, Ivan Bocchiola (Spirit-Tm) blew up a win that he had patiently built up thanks to the win in both the qualifying heats. In the final Bocchiola got immediately a 15” penalty for a jump start, then during the race, run on a wet track, he always remained in the back positions. The win was deservedly achieved by Cristiano Falciti (Maranello-Maranello), who got an early lead of the race and maintained it till the finishing line. The runner up was Luca Bagattino (GP Racing-Tm), arrived just ahead of Mescheil Barson Tadros (Intrepid-Tm) who managed to recover from the last position. Bocchiola arrived 7th.
In the final for the races of the single brand - which were run on wet track too – the win went to Matteo Piselli (Kosmos-Vortex) in the Rok,Demis Graziani (Tony Kart Vortex) in the Super Rok, Alfredo Gagliardi (DR-Parilla) in the Iame X30.
Among the VIPs who were at the event there was Vincenzo Sospiri, former driver and now excellent team manager. He was at the 40thedition of the “Trofeo delle Industrie” to present two new Formula Abarth open wheel cars of his own team “Euronova Racing” for the next Italian and European Championship 2011. During the presentation of the cars, Sospiri showed to a curious crowd of people two historic DAP karts (100 Avenir and 100 Intercontinentale A) he used to race with in the 80s, and a DAP kart (with the number 17) which belonged to Ayrton Senna.
During the prize-giving ceremony, standing ovation for Umberto Pellegrini, the creator of the “Trofeo delle Industrie”, born in 1971 in the kart track of Parma. He did not take part to the celebrations for the 40th anniversary of the trophy to avoid being overwhelmed by the emotions that such an important event for all the Italian karting scene can stir.

All the results on www.parmakarting.it.