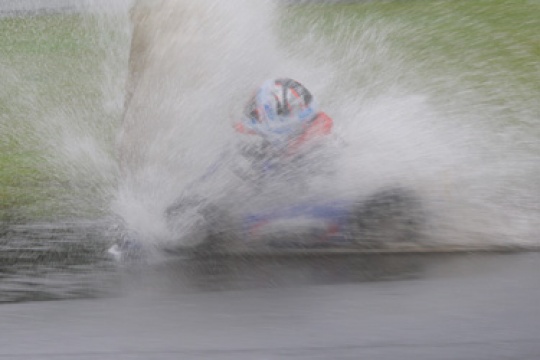 Experience in the field of motor sport has shown us that there is a great exercise difference in the amount of physical exercise that each driver has to carry out his technical, driving skill. Some drivers seem to “spend” very little energy when driving, others look tired out at the end of each race. What are the factors that determine such a difference in a race? There are several (Tab. 1) that influence the driver’s” fatigue”, some are endogenous (derive from the physical and mental characteristics of the same driver).

Some endogenous factors are invariable (they cannot be changed), others are variable (can be worked on to change).

The driver who has a fine driving skill can save a great amount of physical resource in carrying out his technical skill. It has in fact been proved how this skill can help the driver save up to 30% of physical resource. This, among other things, tells us how training and exercise must be considered together when preparing a driver for: a driver who has done all his training “spends too much” if he doesn’t have an economical and rewarding driving skill and, vice verso, a driver without driving skill, if he hasn’t trained and practiced, he could well not manage to get the same level of skilled driving throughout the race.

Having some pathologies, even the smallest, both acute and chronicle, is an obstacle for the driver during his normal race performance, obliging him to work harder because his organs and systems.

Having a correct build in terms of lean mass, fat mass and water, guarantees regular performance. Fat mass within limits, means there is no pointless overload on any part of the body that moves to support muscles and helps positively the economy of physical commitment when racing.

Anxiety is the emotional response to perception of an imminent threat. Then there is muscle tension too, among the “states of alert”, which brings about faster heartbeat and diaphragmatic block with a sensation of “butterflies” in your stomach. However, muscular tension and diaphragmatic block are the most common and can effect performance negatively. Hyper-tone of the upper trapezium (shoulder “closure”) in fact, renders any movement of the upper limbs less economical, furthermore you risk getting a stiff neck; gripping the steering wheel too tightly cam make your forearm get tired sooner and a diaphragm block could make the respiratory muscles tired and as a consequence the peripheral muscles will get less oxygen.

The genetic patrimony inherited in terms of morphologic, organic and perceptive structure, is something on which we can work. What we have received from nature is what we have together to get performance. It seem intuitive, just like being too tall can oblige a driver to make more effort compared to a normal driver, like not having an efficient cardio respiratory system reduces performance ability and a defect in perceptive structures does not allow the driver to have the skill of controlling his kart well due to the variety of information needed for carrying out all the technical gests for an accurate and ergonomic drive.

• Characteristics of the vehicle

The characteristics of the kart can also oblige a driver to more concentration when driving, and therefore spend more energy. If directionality is not perfect, the driver has to work harder to follow the right drive line; brusque engine delivery means that the driver requires more effort to control the kart during acceleration; if the braking system is not perfectly set up, he must change his drive-style.

• Characteristics of the circuit

It’s not just the shape that determines the difference in work needed from one circuit to another, also and in particular the material used as base makes the difference too. For example, track surface that offer less grip not only make a driver work harder to control his kart, but it can also make him more anxious and end up with all the effects mentioned.

• Weather conditions during a race

A wet track suggests the difficulties that have previously been mentioned due to the lack of grip that the track offers. . The driver needs to have more sensitivity in driving, pay more attention to the information in question and how his muscles respond to the stress, it ought to be more modulated and controlled. These are the conditions that might catch the less experienced drivers out, they are more likely to get caught in the somatic symptom of anxiety, which is sparked off by the amount of concentration that they need.

The comfort level of a piece of clothing is determined by its performance in terms of ergonomics and how well it controls inside temperature and humidity, Talking about ergonomics, we must underline that a comfortable driving suit must be comfortable at all times, even when sitting in the vehicle, if this wasn’t so, it would mean that the body would have to spend more energy, muscles would have to work more to maintain the right position. Drivers must be able to perform all the required movements for driving comfortably, it mustn’t be tight at the waist so as not to block diaphragm muscle, which is working hard mechanically carrying out the task of respiration. The difficulty in controlling temperature and humidity is in balancing properly heat “entry” represented by muscle work, radiation and heat coming from the track and “exit” represented by ventilation and vaporization. If clothing worn does not work properly it would be an obstacle to body thermo-regulation and as a result, it would inevitably give rise to tiredness because of the mechanism requires more effort to dissipate heat.