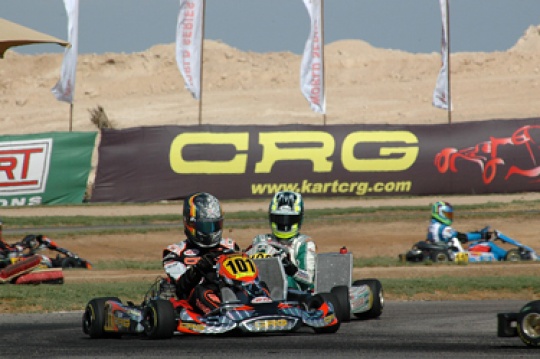 Thonon confirms his leadership in KZ2 and wins the title; Verstappen champion in KF3. Great win for Kozlinski in Super KF. Great performance of Gatting in KF2

31th October 2010. Mission accomplished by CRG-Maxter official team in the WSK World Series. The team won two titles on four: in KZ2 with its champion Jonathan Thonon and in KF3 with the young international promise Max Verstappen.
The last act went on stage in Egypt in Sharm El Sheikh and was the occasion for the CRG chassis and the Maxter engines to show all their potentialities, not only in the two categories won by the team, but in Super KF too, thanks to Arnaud Kozlinski that was able to put his seal on the African event while in KF2 Michelle Gatting showed her undisputable qualities once more.

In KZ2 the Belgian Thonon swept the board in the final, recovering from the last position on the grid because of a technical trouble in the pre final. He drove straight to the final win and nobody was able to match his performance. Good performance for Mirko Torsellini too – at his debut -, fourth at the chequered flag and second, with only Thonon ahead, in the special ranking of the fastest laps.
Unfortunatley the American driver Gary Carlton had to retire after a crash in the first laps of the final, after a fourth place in the pre final.
In the championship, Thonon finished first with 185 points, ahead of Dreezen with 124. Carlton arrived third with 113 points.
In KF3 Max Verstappen confirmed to be one of the top drivers of the category, attacking since the qualifying heats where he got two wins. So, thanks to a good second place in the pre final, Verstappen was able to secure the title with an advantage of points which became too wide for his rivals. He then dominated the final: he took the lead of the race and never let it go till the end. Verstappen arrived first, the Japanese driver Kasai was the runner up and Verstappen’s teammate Speedy Antonio Fuoco grabbed the third step of the podium after a weekend of great performances throughout the various phases of the race. After the end of the race the unexpected disqualification of max Verstappen for an irregular contact with Visoiu during the first laps. However, the fact, beyond all the considerations on the decision, had no effect on the final result of the championship: Verstappen tops the ranking and becomes champion with 152.5 points. Visoiu follows with 118, then Oriola with 87.5. Fuoco finishes fourth with 72 points.
In Super KF the absolute protagonist was the CRG champion Arnaud Kozlinski together with his teammate David Forè who recovered well till the third place in the final. Kozlinski won hands down both the pre-final and the final, redeeming himself after the two previous of the WSK World Series.
Good performance for Felice Tiene too, fifth in the pre final but a bit behind in the final, where he arrived in seventh, while Eddy Tinini in the final was obliged to retire after a promising 11th place in the pre final.

After the end of the race De Vries (Zanardi) was disqualified after gaining a second place and virtually putting his hands on the title. So, Forè was the runner up.
The championship was eventually won by Convers (Kosmic) with 148 points, before De Vries himself with 142.5 points, while with the win of Sharm El Sheikh Kozlinski placed third with 95.5 points. In the ranking Forè is sixth, Tiene tenth and Tinini twelfth.
In KF2 the Danish driver Michelle Gatting managed to focus everybody’s attention on the colours of CRG-Maxter official team. She won two heats and a terrific pre final, where she managed to take the lead with five laps to go. Unfortunately, in the final Michelle was pushed out in the tussle of the first phases of the race. Eventually the championship was won by Bailly (Kosmic) with 144 points. Michelle Gatting is eighth with 67 points.