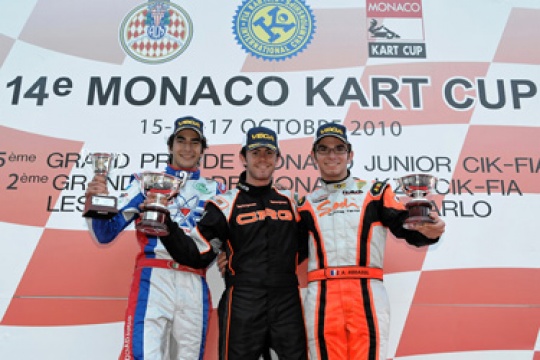 In Montecarlo the french driver sweeps the board and wins the CIK-FIA race . Three maxter engines in the first five places. Good result for Rowland, fifth with CRG Holland

Monte-Carlo (MC), 17th October 2010. Terrific performance for the French driver Norman Nato on CRG-Maxter in the Monaco Kart Cup, the prestigious CIK-FIA meeting, in the KZ2 category. The quick French driver, assisted by his team – the T3M – together with Arnaud Kozlinski and thanks to the technical support of Tec-Sav, swept the board and dominated the race of Monte-Carlo since the first qualifying heats. The success of CRG must be shared with the good performance of the Maxter engines, which placed three engines in the first five positions.

However, the Monte Carlo race was a tough one, especially because of the asphalt which turned out to be rather dangerous after the rain fallen before the final. This is another reason why Nato’s performance was absolutely outstanding. After winning both the qualifying heats on dry track, achieving the fastest lap in both of them, Nato got the lead of the final race immediately despite the wet track. He then managed to gain on the rivals till his well deserved final win. Behind Nato, all the protagonists of the CIK-KIA karting season: the KZ2 European champion Paolo De Conto arrived in second, before the French Antony Abasse who brought on the podium another Maxter engine. The Polish Driver Patrick Hajek arrived in fourth, just before the other CRG-Maxter driver, the English Oliver Rowland of CRG-Holland, then the KZ1 European champion, the Dutch Bas Lammers.
Nato’s success, eighteen years old from Antibes, is even more important considered the fact that this year he has raced mainly in car-racing. In 2010 Nato has taken part in only one karting race, in Lonato in the WSK Euro Series, achieving an excellent second place arriving just before his teammate Thonon. His season in car-racing was excellent too: it was his first year and he managed to be the runner-up of the F4 Eurocup 1.6, and his debut in the World Series by Renault with the Formula Renault 2.0 is coming next year.
Press Office
CRG SpA