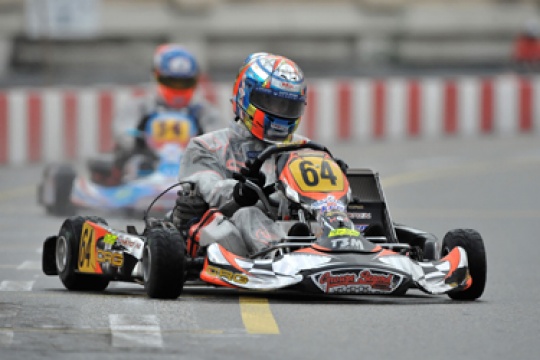 The Monaco Kart Cup started on a dry track, but finished in the rain. Drivers had to use all their talent to stay focussed and do their best in these conditions, and in addition to that they also had to use efficient and polyvalent karts to achieve results.

In the Principality of Monaco, famous for his Palace, his Casino and his F1 Grand Prix, Norman Nato triumphed in KZ2 and proved to be just as fast and effective as his CRG-Maxter.

The Monaco Kart Cup remains a special event that every driver, every team and every constructor wishes to add to their list of victories. CRG and Maxter are two brands that have already won this prestigious event, but every new edition poses new and difficult challenges. The circuit, which passes on the harbour, between the mythical turns of Rascasse and Bureau de Tabac through the Swimming Pool chicane, is narrow, bumpy and fast. Hence the importance of having an easy-to-drive chassis. 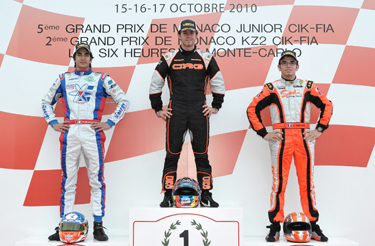 "In Monaco more than elsewhere you have to trust your kart completely", said Norman Nato. "As far as I am concerned, it was essential, because this year I have focussed more on cars than on karts. But I quickly began to feel at ease thanks to a chassis very easy to use and to set up, with fantastic brakes. On the dry track, I won my two heats, each time with the best lap. With Maxter providing engines and Tec-Sav as engine tuner, I felt really confident about the outcome of the final race".

However, when the rain began to fall, he had to change his strategy. "The track became very slippery, with different surfaces on the different parts of the course as well as a tricky road marking. In fact, I was surprised at the competitiveness of my chassis in these very difficult conditions. I found myself in the lead on lap 3 and I could quickly increase the gap. Sometimes I slowed down because of some of the drivers who had remained behind, but I kept my pace until the end. I would like to thank the whole T3M Sport team, Tec-Sav, CRG and Maxter, as well as Arnaud Kozlinski who put his experience at our disposal. This type of races really makes you want to continue racing with karts, on a CRG-Maxter obviously!"

In Monaco, there were as many as two Maxter engines on the podium and three in the top 5, including that of British driver Oliver Rowland. Rowland achieved his best result ever at this level since his debut in KZ, and he has discovered his CRG-Maxter only recently!