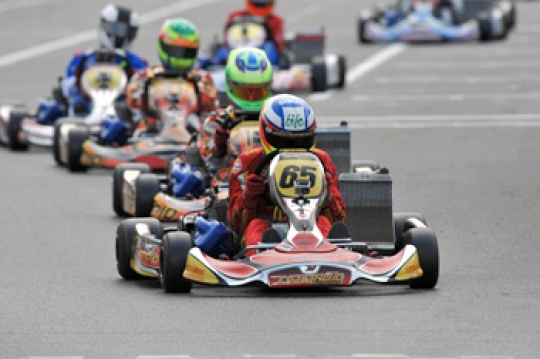 Suspense will be at its peak for this third and last round to be run in France as ten Drivers can still mathematically be crowned, with the two leaders of the provisional Championship classification on the same number of points! The Briton Jake Dennis (Top Kart) and the Finn Teemu Suninen (Maranello) have 36 points each after the events already held in Germany and Spain. Winner in Spain, the Northern Irishman Adam Stirling (Intrepid) is only 4 small points down, and if he were to prevail again at Val d'Argenton his win would automatically give him the title as the points difference between those allocated for the first and second positions is 5 units. Behind these three, seven additional Drivers still have a chance to be awarded the World Champion title, even if circumstances will have to be particularly favourable to enable them to achieve this feat. Everything remains mathematically possible for Finland’s Matias Köykkä (Maranello) and Ville Mäntylä (Energy), for the Irishman John Norris (Intrepid), the Italian lady Driver Chiara Poletto (Parolin), the Frenchman Vincent Fraisse (Intrepid), Britain’s Jordan Chamberlain (Intrepid) and Spain’s Victor Colome (Intrepid).

While the fight for the Drivers’ title will be the most visible and commented one, let us not forget that the make used by the winning Driver will be awarded a world title as within the framework of this new Championship the FIA has also created a title of CIK-FIA Karting World Champion for Makes. Out of the 14 entered makes at the start, 5 are still in contention for the supreme consecration before this final rendez-vous!

In the supporting category of the “U18” World Championship, the CIK-FIA Karting Academy Trophy, there is also something new in the air of international Karting. With its thirty-three 13-15 year-old Drivers from as many different countries, the Trophy almost looks like a real Nations’ Cup and, thanks to the identical equipment for everyone, a very warm atmosphere reigns between all the participants, Drivers, Mechanics, parents or accompanying persons. Double winner in Germany, well classified in Spain, the Frenchman Anthoine Hubert goes to the event as leader, with a rather comfortable lead and the advantage of performing before a public who will totally support him. Behind him, there are nine Competitors who are however still in with a chance of landing the title. Hubert’s strongest opponent could be Finland’s Niklas Tiihonen, who has finished second, third, fourth and fifth since the beginning of the competition. At the moment, the Top 10 is a stranglehold of European Drivers as it also includes the Greek Fillipos Kalesis, the Estonian Hans Villemi, the Briton Roy Johnson, the Swiss Séverin Amweg, the Monaco Driver Charles Leclerc, the Dutchman Max Koebolt and the Swede Hannes Nilsson. But, having taken their bearings in Germany, Drivers from outside Europe are gradually increasing in power. In addition to aiming at a final place in the Top 10, South-Americans, as well as Asians and a South-African Competitor will have a small internal battle to be the first of those who are not Europeans. In this little game, the Brazilian Victor Franzoni has the edge on the Argentinean Federico Paolini, the Chinese Kang Ling and the South-African Michael Taylor.

Each round of these new World Championship and Academy Trophy is concentrated on three days and has the specificity of beginning with an educational programme called EduKart. Competition will therefore start at Val d'Argenton on Friday 1st October with a small theoretical exam carried out on electronic terminals with touch-sensitive screens: Drivers will have to answer a number of questions focussed on their knowledge of the sporting and technical regulations, on safety, on the history and patrimony of Karting or on the anti-doping fight. Karts will initially run on the track on Friday afternoon, with a succession of non-qualifying practice sessions. On Saturday 2nd October, qualifying practice will take place at the end of the morning, followed in the afternoon by 12 qualifying heats. The morning of Sunday 3rd October will be dedicated to the last qualifying heats, which will be a deciding factor for the constitution of the starting grids of the final phase races scheduled for the afternoon. The FFSA (French Federation of Automobile Sport) has added to the programme of the event a race reserved for KF3 karts. In order to celebrate the return of an international event on his circuit, the Organiser will grant free access to the public, and various attractions are scheduled. Finally, Eurosport will be present on the circuit to prepare a 26-minute magazine to be broadcasted on Thursday 14th October on Eurosport 2.