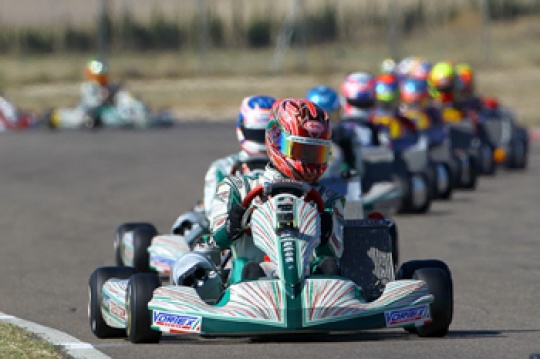 The CIK-FIA World Title, which took place on the Zuera International Circuit in Spain, was disputed during a difficult weekend, in which some different external components partly compromised the final sporting result. The bad weather on Friday and Saturday morning conditioned the first phases of the event, altering the results reached during the rounds with dry asphalt. Actually, on the dry circuit our technical material worked very well and the official Tony Kart-Vortex were always at the top of the ratings.

The driver racing Tony Kart-Vortex who centered the pole position with dry asphalt was the British Varley 1’16”461 (Tony Kart Racing Junior Team) and other 3 Tony Kart-Vortex were placed in the first ten positions, with Lock 4th, Butcher 7th and Pescador 8th respectively. The Tony Kart Racing Team drivers’ performances have been unfortunately damaged by the unforeseeable conditions of the asphalt.
The program of the event proved to be absolutely unsuited to such an important race, actually every driver raced only 3 rounds, without having the opportunity to remedy any eventual unexpected event, during such an extreme race.
The first rounds on Saturday morning were raced on damp circuit and slick tyres. These conditions made every overtaking very risky and strongly altering some final results.
During the round, the Tony Kart stood out 5 times, two with Chamberlain and one with Varley, Klinkby and Lock.
During this phase, our official drivers recovered in an excellent way, reaching the top positions progressively. Unfortunately D’Agosto, Olmedo and Menezes were involved into some crashes, in one round at least, suffering some delays which made all their efforts and their performances fruitless.
The event format, as mentioned above, did not give any margin of recovery at all also to those drivers who have a great potential. So, D’Agosto, Olmedo and Menezes, three possible protagonists, have been driven out from the final phase of the World Cup.
In the pre-final, lots of drivers racing Tony Kart stood out at the top and our chassis monopolized the first two positions, with Chamberlain and Kanamaru respectively, the latter was placed second after a wonderful recovery from the twelfth position. Varley, Lock and Klinkby closed the pre-final within the first ten positions.


The starting grid of the Final was characterized by Tony Kart colours with Chamberlain and Kanamaru in the first line.
At the start, due to a contact in the exciting bagarre of the first bend, Kanamaru lost five positions and in this way he lost the possibility to fight for the victory too.
Our Japanese driver tried to recover positions proving clearly that his Tony Kart-Vortex had all the qualities for gaining the victory. Kanamaru did a great recovery and, after some extremely fast laps he arrived in fourth position.
The best lap of the Japanese driver (1’01”571) is the second best time of the final, gained without taking advantage of the wake.
The final was focused on Williams Motorsport’s Tony Kart (UK) driven by Chamberlain, who fought until the end for the victory.
For the English driver the win went up in smoke during the last lap due to a clever overtaking of the SKF driver De Vries: Tony Kart Racing Team would like to congratulate the young De Vries on the great result he gained.
The unlucky coincidences that thwarted our official drivers didn’t influenced the global result of Tony Kart Brand in fact we would like to underline that the 26,4%  of the drivers were using our chassis, therefore Tony Kart and Vortex are the most popular brands also in this CIK FIA events.
Thanks to our teams partner the Tony Kart Racer EVR chassis powered by Vortex RAD proved their great technical potential, versatility and performances both on the wet and dry track.
In the final, 12 chassis out of 34 (which means the 35,29%) were Tony Kart, moreover they stood out for their great performances and 4 of them, used by different teams, were in the top ten.

Giacomo Aliprandi –Tony Kart Racing Team Team Manager
“The variable weather conditions during the qualifying heats prevented some of our drivers from recovering and expressing their potential completely, in such a few rounds it was really impossible.
The track had a lot of grip and it was in a better condition only near the end of the event, when we were already thwarted by some bad situations.
Reading the final rating, I am anyway very satisfied with the general result obtained by the Tony Kart and Vortex material. The Racing Team also take care of developing the chassis and the material, which will be manufactured. Lots of teams racing Tony Kart-Vortex are at the top positions: this is a great victory for me and for the Racing Team staff as well.”