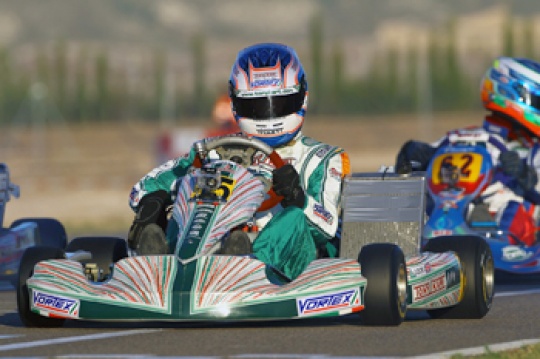 As always the Tony Kart Junior Team was on top also in the CIK-FIA World Championship, which took place on the Spanish track in Zuera. Thanks to Varley we gained the pole position and our drivers fought for the podium, arriving in the Final in 6th position with Lock.

The time table of the race has been a little bit criticized because it didn’t give many chances to the drivers having some small problems during the heats.
The three qualifying heats every driver took part did not allow drivers the least mistake and the most banal inconvenience costed the access into the Final to lots of protagonists.
The raining weather on Friday, during the qualifying heats, showed the excellent Tony Kart-Vortex set up and Lucke Varley centered the pole position with 1’16”461. Also the rest of the team obtained good result from this first phase, centering the fourth and the seventh lap time with Lock and Butcher respectively.
During the rounds, the Tony Kart Junior Racing Team staff had to work on the Racer EVR chassis set up and on the engines optimization constantly, because on Saturday morning the circuit was damp and the conditions were still changing quickly.
So, on the slippery track, with slick tyres, Lock, Varley and Abreu managed to exploit their karts at their best, while Butcher was involved into a crash, compromising his climb to the World Title.
At the end of the rounds, the result is clear, with 4 Tony Kart in the first ten positions, two of them are lined up by the Tony Kart Junior Team: Varley (4th) and Lock (9th).
In the line-up of the pre-final, also Abreu was in an excellent position, after recovering, during the rounds, from the 55th position of the rating.
The World Final was characterized by a bagarre involving the very first positions, with our drivers Lock and Varley, playing a leading role and fighting for the top ten. The top of the rating was full of Tony Kart-Vortex, fighting one against the other and racing with the same technical material.
At the seventh lap, Varley had to stop for a banal inconvenience while Lock went on fighting for the podium facing with Klinkby, Kanamaru and De Brabander. At the end of the race, our drivers Lock and Abreu were placed sixth and sixteenth respectively.
The winner of the race was De Vries, after overtaking Chamberlain at the last lap. All the Tony Kart Junior Team drivers, mechanics and engineers offer their best congratulations to the Dutch driver for his great result.


Paul Spencer –Team Manager Tony Kart Junior Racing Team
“The track conditions and the format of the event called for lot of accuracy and attention, especially during the first phases of the race. Managing to enter the Final with three drivers out of four is a big satisfaction and a good result considering this situation. We also centered the pole position and all our four drivers had really great performances, but the possibilities to enter the Final were just a few, only in case our drivers would have not been involved into any crashes.
For the Tony Kart and Vortex colours this race has been really good, the technical material brilliantly stood out during the whole event, this race proved how performant and top quality our material is with all the teams, both private and official. We fought hard both with the Racing Team and with high level partners”.