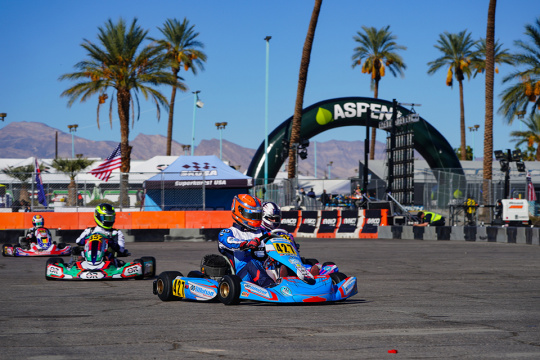 Author: Vroomkart International
After 10 years of providing carburettor technical support for Tillotson at the famous SKUSA Supernats event held in Las Vegas I had the opportunity to put back on the race helmet and compete for the first time at Supernats 25! (by A.Fallon)
I saw there was a push behind the IAME KA100 Masters category and with some persuasion from our US dealer and colleagues I decided to take the plunge and add my name to the entry list. I wasn’t sure if it was wise working in the industry and racing but after clearance from Tom Kutscher and John Mason from Tillotson I had the green light to go racing and tick off a bucket list experience of competing in the biggest karting event in USA! The next conversation was which chassis would I race.. Many felt I would have to race with a conventional 2 stroke chassis but, I decided that I would have to race with our Tillotson T4 kart which I knew would be competitive. The T4 kart is of course designed for the T4 Series which is a 4 Stroke category but I had a quiet confidence that we could surprise some people along the way. Having not competed in a 2 Stroke category for many years I knew it would be a challenge to compete for top honours but the main reason to race was to enjoy the event and experience. The original goal for me leading up to this event was a top 6 result however once I realised the level of competition that quickly moved to a top 10 Final finish from the 44 entered drivers. Let’s see how we got on..
Testing
On the Wednesday I knew the first session would be a little hairy getting to grips with the track. I was impressed how nice the track was to drive but it was challenging especially in the early morning with so little grip.
Testing started decent finishing in P8 out of 44 in my first run. The day however went downhill from here. We ended the following sessions in P12, P17 and P25 so getting slower each session. We could see an issue on the data at the right kink coming onto the straight I was losing 0.5s from here to the end of the straight – many were blaming the chassis however it was handling well everywhere else so we felt we had another problem.
We decided the swap the ignition coil for the practice before Qualifying and boom we were back upto speed – finishing the session in P8 and now in the mix!
Qualifying
Unfortunately, there was confusion and they put me in the slow group which was a mistake. It really hurt my Qualifying as I had to overtake on each of the 4 lap session and my P4 in Group put me P21 overall leaving an uphill challenge ahead.
Heats
Heat 1 was a disaster – crash in Turn 1 and I was in the middle of the chaos. Finished P30.
Heat 2 was the best race of my weekend – I raced from P21 to P9 with some late overtakes that I was happy with. But, I made a very silly error which caused many laughs in the paddock! Having made an overtake on what I thought to be the last lap I crossed the line tight to my competitor and over the line choking the engine and cruised along happy with my result until I noticed I was the only driver slowing to pit.. It was the white flag that they waived and not the chequered flag!! I managed to avoid the pits and keep driving to finish Heat 2 in P16. I wasn’t impressed with myself but saw the funny side and was happy with my speed.
Heat 3 I managed to stay out of trouble and was a little more cautious to guarantee a result and raced to P13 making up 8 places.
Main Event
With the heat results I found myself in P16 on the grid. I managed to get through the first corner chaos but lost some spots being a little cautious. On Lap 3 I got a little ambitious into Turn 3 and kissed the barrier which in turn bent the steering column. Lap times were still strong however and we were moving forward but fitness levels were being heavily tested now!
With one lap to go I was in P11 and the P10 goal was in sight! I got a nice slipstream into Turn 1 but it was a late move and if my fitness and concentration levels were better I should have been able to make it stick but he got the cut back into Turn 2. I didn’t have another last lap lunge in me though I preferred to finish the race and we shook hands after a tough slog on track.
Congratulations to the deserving race winner Martin Stone and to all the Masters drivers who went out and gave it their all on track. I had so much fun racing again. Even we were just outside of the P10 goal set I was happy with the result and more so happy with the competitiveness and performance of the T4 kart! I want to thank many people who helped me get on the grid and enjoy this experience – Jake Mottaz and all at Kart Rising, Bryn Nuttall of BN Engines, Keith Mccloughrey, James Tumulty, Charles Demirjian, SKUSA and all at Tillotson who were offering their support from afar.