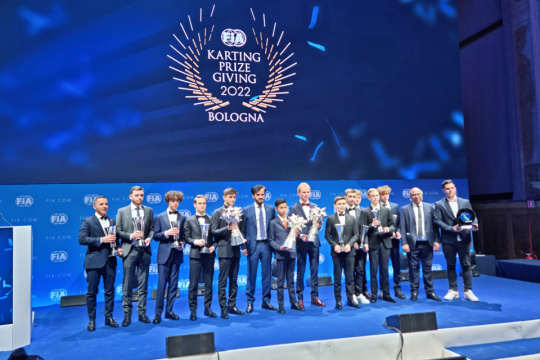 Author: Vroomkart International
This Saturday the CIK-FIA Karting Prize Giving for the 2022 karting titles took place in Bologna (m. boscariol - photo v. costantino).
In the beautiful Gothic setting of Palazzo Re Enzo in Bologna this time it was not just any exhibition (or a tortellini festival) that took center stage, but the most anticipated ceremonial event of the year for us kart lovers: the FIA Karting Prize Giving 2022. After Friday night's FIA Prize Giving held at the Congress Center in the capital of Emilia (the night dedicated to Formula 1 to be clear), Mohammed Ben Sulayem, FIA President, thought of dedicating an entire space on Saturday lunchtime to award the karting champions of this 2022 season.

The event, sponsored by Mondokart, of course, featured them, the winning drivers of the KZ-KZ2 world championship in Le Mans and those of the OK-OKJ world championship in Sarno. Collecting the first prize for the KZ world championship was Sweden's Viktor Gustafsson (CRG/Tm) who said at our microphones that «it's great to be here for the first time after winning the World Championship! Now I can really relax (smiles). However, I can't wait to get back to work with CRG for next year» The Swede finished the world race this year ahead of Noah Milell and Jeremy Iglesias, but always tailed also by Simo Puhakka, who finished fourth and in his last season.

For the KZ2 category to lift the World Cup was CRG’s French driver Arthur Carbonnel (CRG/Tm), victorious this year ahead of Cristian Bertuca and Arvid Lindblad (now in Formula 4). Arthur confided to us that «it is incredible to be here after a great year! I won the world championship with CRG at home and I have my mechanics and sponsors to thank for that! Next year I don't know if I will race in KZ or KZ2, but I can't wait to start the new season»
It is worth mentioning, however, that this CRG triumph powered by Tm in both categories would not have been possible without the invaluable work of the famous tuner Gianfranco Galiffa, from Abruzzo, Italy, who was also present at the ceremony and visibly excited: «it is the first time we win a world championship and it is a great thing. I hope to repeat myself for next season, although it will be very hard»

Picking up the award for the OK world championship was Brazil’s Matheus Morgatto, who dominated in Sarno ahead of Tuukka Taponen (2021 world champion) and Oscar Pedersen. Morgatto reiterates to our microphones that «it is a great honor to be here as a driver. It is really special for me and I have to thank my DPK team for all the work this year; without them this result would not have been possible! I haven't decided yet what I'm going to do next year, but maybe I might race in KZ/KZ2...we'll see»

Collecting the first prize for the OKJ category was the small and extremely amiable Thai Enzo Tarnvanichkul, author of a world race full of overtaking that saw him win ahead of Adam Hideg and Jan Przyrowski. To our microphones, Enzo (Red Bull Junior Team driver) admitted that he felt «definitely very happy to be here. All year long we have been working to win this title and for me, my mechanics, and my family it is like being repaid for all the hard and constant work of the year. For next year, me, my family and Red Bull still have to decide what to do… but you'll know soon»

In addition to the drivers' awards ceremony, there was also the Photo Contest with voters declaring the best photo of the CIK FIA season which was awarded this year to Fotocar13. At the end of the ceremony, the prize for the best-organized event of the year went to the Franciacorta Karting Track delivered into the hands of Raffaella Giacomini and Stefano Bonara who in a very short time managed to conquer the prestigious position with full merit. Raffaella Giacomini to our microphones said, «we are overjoyed, very happy and also very proud of all our staff working with us! We are happy and know that we have to give even more because we have the world championship coming up and a season full of events (and hopefully successes too!). Really thank you to everyone, from ACI to FIA, and also to you at Vroom who have always supported us»