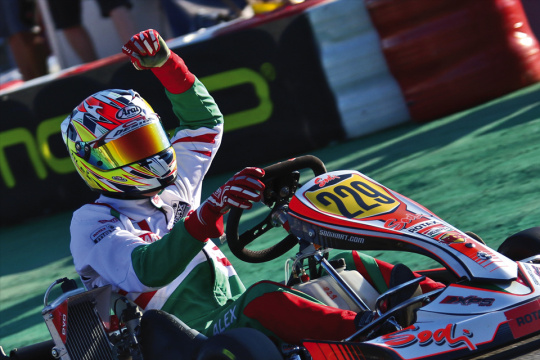 Author: Vroomkart International
Given the importance of the result, it seems right to focus on him: Alex Irlando, 16 year old driver from Italy, takes the Senior crown after a perfect, careful, impeccable final, one of substance. An ending that capped an equally exciting weekend, which would have been in itself remarkable, even without the final victory.
And if the tone might seem slightly over-emphatic, it can not be otherwise, since Alex is the first Italian driver to achieve this important goal. Alex leaves a mark in the history of the sport for bringing the first title of the Rotax Grand Finals to the cradle of Karting. No Italian before him has been able to triumph in this truly global event, and Alex has done it in dominant fashion, taking a light-to-flag win with a flawless performance and a relentless pace, beating all the odds.

RACES REPORT
SENIOR MAX Alex’s masterful weekend
The Senior class, usually top category of the Rotax program, does not frustrate expectations providing great entertainment, and a new record. For the first time in the 16-years history of the event, an Italian driver has managed to win a title in the Rotax Grand Finals. The pole goes to the Turkish driver Berkay Besler (1’00”302) only 6 hundredths faster than Alex’s laptime. The fast Australian Pierce Lehane, former European Champion in the Rotax Euro Challenge, stops the 3rd time just over a tenth off pole, with the top 63 drivers (out of 72 participants!) within 1”.
Alex stands out also in the heats with two victories and a fifth place that projects him in third place on the grid of the prefinal, flanked by Dutch Willemse (a win, a 3rd and a 5th place for him), while the front row is occupied by Besler (one win and two 2nd places) and English driver Brand (also two wins and a 4th). German Deyspring (3-3-2) and South African Sherratt (5-4-6) share the third row, just in front of US driver Selliken (2-6-7). A bit more difficult heat session for Lehane, 8th overall after a 2nd and two 7th place, for US driver Kirkwood (24th with a 4th, a 10th and 34th), English Sam Marsh (27th following 9th, 28th and 11th) and Dutch Hoogenboom (12th with a 15th, a 6th and 8th), with his two compatriots Blom (35th and 6th, a DNF and a 21st) and Van Kalmthout (65th with two DNF and a 16th) on a bad day. In the prefinal, Alex continues his successful stride becoming the first Italian to win a prefinal in the Rotax Grand Finals. Constantly lapping in 1’00”5 and clocking a fast lap of 1’00”298 (third of the race only a few hundredths from the fastest), the Italian holds to the lead for a few laps, the fights in the top-5 for the next 7 laps, when the leading quartet made by Deyspring, Sherratt, Borlido and Hoogenboom hinders each other with a few contacts giving way to Alex.
Shadowed by Besler for the last couple of laps, the Italian keeps cool showing great defensive skills fending off the attacks of Turkish driver, and goes to take the pole for the final, with Bezel, Selliken and Sherratt completing the top-5. It is the most anticipated moment of the weekend. The final gets going with a brilliant start of the Italian who keeps the lead at the first corner, and shortly after is put under great pressure by Sherratt followed by Bezel and Besler. A few laps and the leading pair moves away, with Alex proving more and more solid in the lead. Sherratt loses a few meters, Selliken reels in passing with seven laps to go. Alex is a hammer, his pace is consistent and his lead untouchable, all the way to the finish. Kirkwood finishes a lonely 4th, with Bezel in 5th, Brand who recovers up to 6th after closing the prefinal in 16th, then Deyspring and Besler who had lost several positions in the early stages.

JUNIOR MAX Guaranteed entertainment
Great show in Junior with an endless sequence of overtakes and non-stop action throughout the weekend. The qualifying practice is hard fought. Finland’s Roope Ropanen imposed himself by only 75 thousands (1’01”912) on Scott Symons from England, with French driver Venturi following over a tenth down, and English duo Thomas-McCarthy very close.
In the heats Thomas takes three easy wins for the pole in the prefinal, with compatriot Symons joining him on front row after a win and two 2nd place. Second row for poleman Ropanen (1-2-5) and Venturi (5-1-6), with the Mexican Sulaiman grabbing an unexpected third row (3-4-5) joined by English Charpentier (7-5-4). Both McCarthy (16-5-2) and Australian Cameron (17-3-4), on row 5, could have been further up the grid, as well as Brazilian Collet (24-6-8) and Scot MacDonald (6-34-3) forced to start from 17th and 21th place respectively. Marco Settimo, the only Italian in the category, was able to finish 18th in the overall standings.
In the prefinal, as many as 6 drivers fought for the victory with overtakes at each and every corner, nail-biting action of attacks and counterattacks. After two laps in the head, Thomas gets taken by Ropanen, the Finn leading for three laps. But the battle rages on, and the English goes back in the lead, with the Finn finding once again the right gap two laps later to finish first ahead of Venturi, Charpentier, Thomas and Collet. Stunning fighting spirit of the British quartet Thomas, Symons, Charpentier and MacDonald (unwisely even against each other) while fighting for the top places and absolutely unable to work as a team, to the despair of the British delegation. No problems for the Kiwi driver Drysdale, involved in a massive crash that saw him bouncing off the kart at the first corner. Nothing serious, routine checks at the hospital and the Kiwi was back on track for the final. The final starts slightly late as a result, and Ropanen holds on to the lead, but only for the first lap. The fighting for the top spots rages from the early corners and Charpentier is the first to take the plunge, moving in front of the leading group. But Collet and Ramirez (USA) are not there to watch and take turns in the lead, with Venturi and Ropanen busy fighting with each other as Thomas and Symons who also join in the mix. Exciting race from start to finish, with Venturi that manages to have the better of Ramirez and Collet, while Thomas and Symons hinder each other in the final lap while battling for the podium, ultimately favouring the Brazilian.

DD2 Kancsar dominates
In the DD2 category - possibly the hardest class with a high technical value - that also saw the unprecedented participation of 2 times F1 vice world champion Rubens Barrichello, Hungarian Ferenc Kancsar is head and shoulders above everyone else throughout the weekend. The reigning Rotax Euro Challenge champion stopped the fastest lap in qualifying with 58”929, 4 hundredths better than English Luke Varley, of Team UAE, and 8 faster than South African Bradley Liebenberg. As in the Senior, the top-65 (of 72 participants) are within 1”!
Kancsar continues his domination by winning all three heats, having the better of Varley in the first, and Backman in the remaining two, taking pole for the prefinal. But the English is a thorn in his side. Two wins and a 2nd place allowed him to start from the front row, with Backman (3-2-2) and Liebenberg (4-3-3) in the second. A win and a 3rd also for Polish Bartoszuk, who is however forced to start from 13th following a poor performance in the second heat, similarly to the German Kamali (2-23-5), 16th after the heats. Barrichello was also in trouble, as after the 25th time in qualifying had to retire in the first heat due to a crash, then 13th and 11th in the next two that forced him to go through the second chance heat, closed in 3rd place behind talented Natalia Balbo from Italy (a DNF in the first heat followed by 12th and 9th place). In the prefinal, after the spectacular accident of Natalia Balbo at the first corner of lap 4 with Portuguese Leitao, luckily without consequences, Kancsar continues his winning stride followed by Varley throughout the race. But the English never had a chance, having to race his socks off in the early laps to dispose of a impressive Malaysian driver Melvin Moh, who finished 6th behind Backman, Liebenberg and Thomsen after lapping on the same pace as the leaders. Barrichello struggled a bit to get into his rhythm, lapping a few tenths off the best to end in 20th place. In the final, Kancsar proves once again unbeatable leading from start to finish stopping the fastest lap of the race (59”134), relentlessly edging away from Backman to close with more than 1”5 margin. Third is Dane Thomsen, down some 9” from the winner, with Barrichello putting on a prodigious comeback all the way to 4th.
Varley instead slips in 4th place in the first lap and then is forced to retire on lap 7 while fighting with Kamali for the 3rd place. Final to forget also for Liebenberg, down to 24th after the first lap due to a contact in the first corner, and out four laps later.

DD2 MASTERS Surprise ending
In the two-speed category for over-32, the ending is unpredictable, because if South African Michael Stephen is the protagonist of all sessions, including the final, his dreams of glory would be thrown out the window with a few laps from the chequered flag, with New Zealander Ryan Urban taking the spoils. In qualifying Derek Wang form the US stops the fastest lap with 59”257, valid for the pole, with Stephen down a mere 0”056, then Japanese Kawase and Finnish Ollikainen separated by just 5 thousandths. In the heats, Stephen (3-1-1), Wang (2-3-1), Ollikainen (1-3-3) and the American Schiavo (4-1-4) fight for the front row for the prefinal closing in this order, with the South African only one to take two victories. Third row for Urban (5-2-2) and Brazilian Gozzi (1-9-2), while his countryman Russo is excluded in the last heat after taking 5th and 2nd in the previous.
A hard fought prefinal saw Stephen taking the pole for the final after an intense, exciting yet fair battle with Ollikainen. The two pull away in the early stages with Urban slightly detached, ad Guzzi fighting for 4th place and author of the fastest lap (59”332).
The final looked like a copy of the prefinal, but it ended dramatically for Stephen who lead for 17 laps, closely followed by Urban first, and then Ollikainen. With three laps to go, the South African and Finn touch, leaving the way open to Urban, Ringelberg and Zughella, with Russo and Guzzi completing the top-5. Stephen dropped down to 11th while Ollikainen to 9th, but the Finn would be given a 10” penalty for the contact that cost the title to the South African dropping down the order.