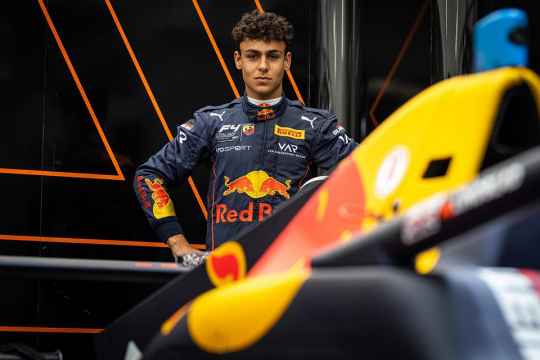 Author: Vroomkart International
On the occasion of the penultimate round of the Italian Formula 4 Championship held in Monza we had the opportunity to speak with the English driver Arvid Lindblad, in his second race in formula 4 and who chatted with us remembering the “old days” of karting.
A rainy day this Sunday in Monza, with even a race canceled due to adverse weather conditions. Arvid Lindblad (Team VAR), a former kart driver with team KR, shone on this occasion, managing to finish seventh and ninth in races full of accidents and Safety Car. Born in 2007 (London), he boasts a third place in the FIA ​​World Cup KZ2, a first place in the WSK Euro Series OK, a third place in the FIA ​​European Championship OK, and a third place in the FIA ​​World Championship OK. Today, Lindblad is under the “tutelage” of the Red Bull Junior Team and the boy seems really determined to lead the way. Definitely one to keep an eye on in the next Formula 4 season!

Arvid tell us about your two first races in Formula 4!
Red Bull Ring was really difficult! Qualifying was wet and I never raced on wet, so it was not easy. I think I qualified P20 or something similar and this made the race more difficult with so many cars at the start. I did the best that I could in my first race. I had not so much confidence in battling and passing, but I recovered some positions. I made quite a few mistakes during the weekend and this made me a little bit sad, but I worked a lot for improving myself here in Monza. I want to become stronger and the driver I want to be even here in Formula 4! I am really happy with the work we have done and the testing of the last week was really positive. I came here with much more confidence. At the beginning of the week, we struggled a little bit with the balance, but I saw that we had the quality to be in the top10. On this Saturday, Qualifying 1 was really difficult with a lot of changes on the car, obtaining P11. In Qualifying 2, I didn't have the chance of a representative lap due to the red flag but I improved my lap time a lot, so I am very proud of my P6. Yesterday was one of my first races in the front, so it has been a little bit difficult. I have done a good job in the fight and in the battle. I was P5 in the last lap with good overtaking, but for some mistakes, I finished P7. In the last race, I had a good start fighting a lot with my teammate. I fought all race for P5/P7; I got P4 but then for some battling, I finished P9. I think that if my first race was not really good, this second race has been positive, with a lot of progression (thanks also to my team) in comparison to my first race in Red Bull Ring. I have a really competitive car thanks to my team, so I am really happy!

What are the "practical" differences driving a Formula 4 compared to a kart?
They are quite different things! In kart, you have less power and little tracks. In Formula 4, you race in Formula 1 tracks with more power. But with bigger tracks, all is slower than karting. It's like coming back to the Mini! In karting, you are in control of the kart, but in Formula 4 you have to be one with the car, having confidence and believing in her. The sense of the limit is very different between the two!

Are you still going on track with your kart for training?
Not daily! My last experience was in the World Championship, but usually I go karting with my friends for fun. I go like every month for testing and fun. For training my self I do a lot of stuff in the gym and with cardio, trying also to play a lot of other sports. I train for general fitness and for more demanding future categories, but with Formula 4 I train also the legs, because unlike karting, the brake pedal is not so soft!

What advice would you give to a kart driver to get to formula?
The biggest thing is that you have to want to win the most! If you want to be the best, if you want to become a Formula 1 driver, you have to win more than the others! You have to have the desire to work hard and be willing to put all you are to arrive to the top. You have to leave nothing on the table!