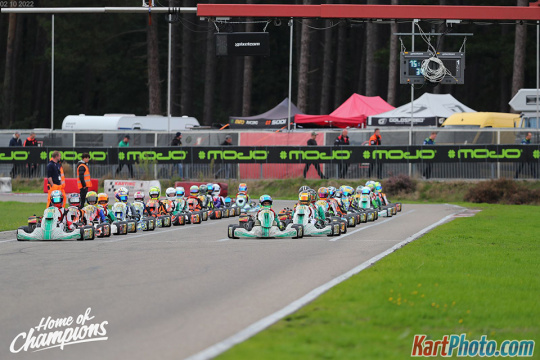 Author: Vroomkart International
The 1,360-metre circuit of Karting Genk showed some great racing over the course of the final race weekend of its 15th anniversary season in the Limburg region of Belgium, which saw almost 130 drivers compete, representing 12 different nations.
Six champions were crowned, which also saw the history books be rewritten in the process, along with five drivers being given tickets to race at the forthcoming Rotax MAX Challenge Grand Finals in Portimão this year, which takes place between November 19th and 26th.

In Micro Max, Senn Lindeman (#4 – NED) would take the title with just one race to go on 240 points, 64 ahead of Belgium’s Vic Van Campenhout, who would fight hard right up until the final weekend of the year, whilst a great début season for Great Britain’s Jack Freeman saw the youngster in the #93 round out the championship podium.

The weekend belonged to Zdenek Babicek (#30 – CZE), who also competed in the Mini MAX class, hitting the top step of the podium with three wins and a fourth place finish. Lindeman would not place outside the top three all weekend finishing as runner-up, ahead of Ryan Rijvers (#3 – NED), Van Campenhout and Great Britain’s Jenson Chalk (#64).
It came down to the wire in Mini MAX, as Max Sadurski (#119 – NED) would not only take the title, but would secure his place for the Grand Finals, with Boaz Maximov (#130) not having the best luck to secure a second title this year, finishing 10 points behind. It was a Dutch clean sweep, courtesy of the #103 of Mats Van Rooijen, who rounded out the top three overall.
Despite being excluded in qualifying, another Briton showed his true speed in the races, as Jacob Ashcroft roared away from the rest of the field in the last three races of the season, winning the weekend. Babicek finished second from the weekend, ahead of now two-time BNL champion Sadurski. Maximov and Van Rooijen would complete the weekend podium.

Junior Rotax saw another two-time champion crowned, as the #254 of Tommie Van Der Struijs put himself into the championship fight with Denmark’s Mikkel Pedersen (#255), with the Dutchman taking the crown by just four points on the final race. Pedersen was clearly disappointed, but would pick up the Grand Finals ticket for Portugal. Scott Marsh (#222 – GBR) would again hit the final spot on the championship rostrum like he did at the Euro Trophy, showing his prowess in his first European season as a Junior.
Van Der Struijs would win both races on the Sunday, putting him on the top step for the weekend result, ahead of title protagonist Kasper Schormans (#240 – NED), with Marsh completing the top three.
A piece of history was made as Belgium’s Kaï Rillaerts not only became a fourth-time BNL champion, but he is the first one to win titles in three different classes, including his début this season as a rookie. He also picked up the title with one race to go, dethroning defending champion Sean Butcher (#301 – GBR) by 32 points at the end of the season. The Czech Republic’s Eliska Babickova (#357) had also been in the running, but would have to settle for third overall, but will head to the Grand Finals in Portugal with the ticker she received in Genk.
It was a repeat of these top three on the weekend, with Rillaerts having taken two wins, a second and third to hit the top step on 86 points. Butcher would place second with 65 points after a third place and a victory on the Sunday. Babickova was third on 49 points, having her best results on Saturday with a win and a fourth place result.

Another title would be very closely decided in DD2, as Mark Kimber (#410 – GBR) and defending champion Glenn Van Parijs (#410 – BEL) would have to race right up until the final race of the season Sunday afternoon. It was a difficult final weekend for the Briton, as he hit trouble, but he would emerge as the new champion, taking his second DD2 title along with the Euro Trophy this year on a fantastic début season. Van Parijs may have only been seven points adrift, but he will represent Team Belgium in Portugal this coming November. Estonia’s Ragnar Veerus would round out the overall top three for the second year in a row.
Van Parijs would win the final weekend of the season on 86 points, five ahead of Dutch racer Kris Haanen (#407), as Denmark’s Mathias Bjerre Jakobsen completed the top three, even though he could have scored good points on Saturday, had it not been for front bumper penalties.

The DD2 Masters title for 2022 would also be decided on the final weekend, thereby meaning that France’s Paul Louveau, last year’s RMCET champion, would win the title by 16 points from Belgium’s Ian Gepts (#502), after the Saturday final saw Gepts unfortunately collide with outgoing champion Carl Cleirbaut on the final lap. Michael Becker  (#526 – GER) would win the final race of the season, helping him to finish third in the standings.
Germany’s Thomas Piert (#550) showcased the speed of his Praga throughout the weekend, winning both races on the Saturday, helping him to win the weekend, ahead of Louveau and Gepts, who completed the weekend event podium.

With the 15th anniversary season completed for the BNL Karting Series, the focus now looks ahead to another exciting year in 2023, with the calendar set to be revealed in due course.