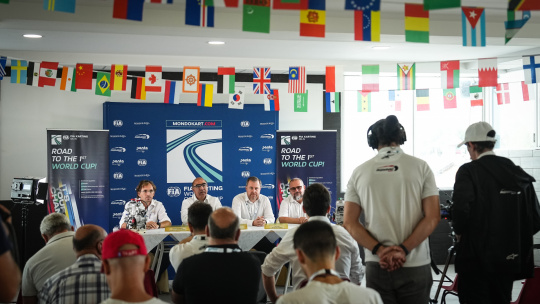 Press Release by: FIA Karting
Taking advantage of the publicity around the Mondokart.com FIA Karting World Championship OK and OK-Junior, the CIK-FIA organised a press conference on Saturday, 17th September, in the presence of the  FIA Karting Commission President Akbar Ebrahim, his Vice President John Ryan, the head of karting of the Italian Sporting Authority, ACI Sport, Raffaele Giammaria, and the FIA Karting technical delegate, Karl Janda. The subject was the development of OK-N.
The President wished to recall the framework of the introduction by the CIK-FIA of this new category.  “The aim is to offer a simple, powerful and economical engine for national competitions. The OK-N is in fact largely derived from the OK and OK-J engines, renowned for their performance and reliability, which have been used mainly at international level since 2016“. The OK-N is based on components already available on the market. It differs from them by the absence of a power valve and by a maximum engine speed reduced to 15,000 rpm, two criteria that contribute to an increase in mechanical reliability and a reduction in operating costs, while retaining some of the strong points of the original OK: power of around 35 hp, lightness and simplicity, and the attractiveness of a true competition engine.

"The OK-N is not just an engine with attractive features", the President continued. "It is a global concept for national championships with a sporting perspective culminating in a World Cup to be held from 2024. The event will bring together the qualified drivers in their country under the responsibility of their National Sporting Authority“. The FIA Karting World Cup - OK-N will be based on specific sporting and technical regulations that will limit the equipment to one chassis, one engine and one and a half sets of tyres per driver. The race format will also be tightened to make this competition more accessible to a larger number of drivers.

“The criteria chosen for the OK-N inevitably evoke a return to the roots of karting“ he concluded. “By favouring an affordable and popular sport as it was at the time of its initial impetus. From the CIK-FIA perspective, OK-N races must be open to all drivers, engine and chassis manufacturers in order to benefit from an open market to ensure better control of operating costs through healthy competition.“

For the first OK-N World Cup, CIK-FIA has decided to use a butterfly carburettor rather than a bowl carburettor, although CIK-FIA leaves it up to the National Sporting Authorities to choose one of the two possible configurations for their national championship.

The first reactions to this new concept are already very positive and several countries have already confirmed their wish to offer the category in their national championships from 2023. The CIK-FIA has also stated that if a minimum of six National Championships organise qualifying events from 2023 onwards, the FIA Karting World Cup - OK-N could be organised as early as 2023 instead of 2024 as initially planned.

As head of karting at ACI Sport, Raffaele Giammaria explained the direction taken by the Italian ASN: "We are going to introduce the two new OK-N and OK-N-Junior categories from 2023 onwards in the Italian championship, relying on the confirmed involvement of the brands offering an OK-N engine, namely IAME, Modena Engines, TM Racing, Vortex, Rexon and LKE".

Karl Janda, FIA Karting technical delegate, concluded by outlining some of the specificities of the OK-N engine compared to the OK engine from which it originates. He also specified that all the National Sporting Authorities have the opportunity of setting up the Junior version of the OK-N as ACI Sport in Italy has decided to do.