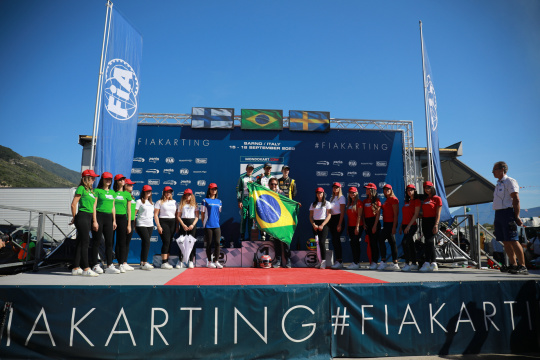 Author: Vroomkart International
The FIA Karting 2022 season comes to an end as Matheus Morgatto (OK) and Enzo Tarnvanichkul (OKJ) are the new World Champions!
On the Circuito Internazionale Napoli the curtain falls on the FIA Karting 2022 season, an articulated weekend, difficult to read and above all with that finale you do not expect and two new World Champions completely unseen.

OK - Morgatto and Brazil on top of the world
If the Brazilian edition of the World Championship never actually came to fruition, the most important title of the year was nevertheless tinged green-gold. It was Matheus Morgatto who put his signature on the most coveted trophy after a course that was undoubtedly worthy of its own finish. Between heats and Super Heat, the Brazilian driver never let go of the first position, raising his hopes for success. In the last twenty laps of the year, the Brazilian driver literally enchanted everyone with an effective and clean drive capable of digging a gap of over two seconds and crossing the finish line with his arms in the air as the new OK Senior World Champion. Victory that also brings a title back into the hands of the chassis designer Fernando Alonso on DPK management. Podium completed by Tuukka Taponen, still at the top of karting, going from Champion in 2021 to Vice-Champion 365 days later, third the Swede Oscar Pedersen also more than promoted this season. To underline the ten positions recovered by Maksim Orlov in fourth place, Freddie Slater closes the top five. Excellent recoveries also for the CRG All-Blacks, nineteen positions recovered for Olin Galli (eighth at the end), tenth Gabriel Gomez with eleven positions recovered.

OKJ - Tarnvanichkul you are the Champion
A season finale all on the up could only end in the best way for Enzo Tarnvanichkul, the new World Champion straight from Thailand. Five overtakes that the driver had to make before securing the lead, fighting and then waving goodbye to everyone towards the last corner of the last lap. It was a highly unexpected ending, especially for the great competition, brought on by Anatoly Khavalkin, pole man and man of the race on Saturday. Khavalkin then had to surrender to the tussle and the ensuing 5sec penalty for positioning the spoiler which, in fact, forced him into 11th place overall. There was a good fight between Gerasim Skulanov and Adam Hideg in the early stages, with the latter able to keep up with Tarnvanichkul until the end and climb onto the podium as World Vice-Champion in second place. Podium completed by Jan Przyrowski, among the announced protagonists of the World Championship of Sarno, fourth place in the hands of Maciej Gladysz with twelve positions recovered compared to the start, twenty-five overtakes made by Renè Lammers to close in the top five with fifth place.