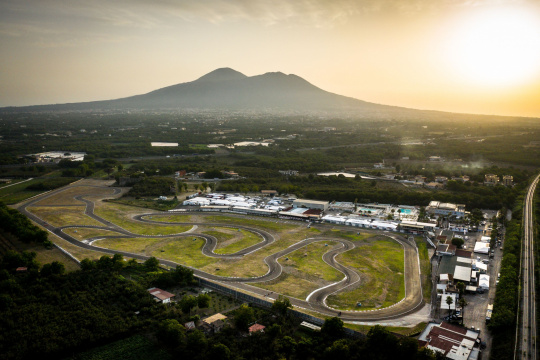 Author: Vroomkart International
Sarno's will be the last act of the FIA Karting 2022 season, who will be the new "Live" World Champions?
"The Last Dance" as they say in recent times to indicate the last act of a course full of important details, exactly like the FIA Karting 2022 season. The last appointment which, as always, coincides with the World Championship and which, as always, will have all eyes on it, especially to identify the new young World Champions to be entered in the Federation's Roll of Honour.

Very high responsibility that the Circuito Internazionale Napoli has taken on, ready as always to provide a worthy backdrop to the FIA competition, following and closing the wake of the events "made in Italy" after Cremona, the grand finale of the European Championship at Franciacorta and now the World Championship. High numbers were recorded in both categories, animated not only by the strong names of the whole season but also by luxury "wild cards" and drivers flocking to Sarno for the last big event of this season.

In OK it will be open hunting for the reigning European Champion, among others already Junior World Champion last year, Kean Nakamura-Berta. The Japanese driver probably did not shine during the European Championship, which he won yes but never got on the top step of the podium in the four events available. A golden opportunity to shut someone up and to take a trio between 2021 and 2022 that is difficult to achieve even looking back. In addition to the favour of prediction, Nakamura-Berta will have to pay attention to the internal fight with Alex Powell, on the contrary winning in two stages out of four and for almost the entire race at Franciacorta, mathematically and resoundingly champion. Still open wound that of the Jamaican of Mercedes to be exploited to take a revenge of double value. The same goes for Joe Turney, mocked after having led the European Championship as classification leader and called upon to do what other team mates did during the previous editions of the OK Senior World Championship. Three names on which it would be useless not to bet, but which will certainly leave room for the various "luxury outsiders" who, historically, take over the scene on these occasions. Taponen, Coluccio, Stolcermaniss, Lindblad, Slater and Gomez among others will be to keep an eye on.

As for the Junior, there are those who expect a remake of the fight for European 2.0 between Anatoly Khavalkin and Nathan Tye. A dualism that brought to mind some of the best direct clashes seen on the track and ended up being decided by a few details, the same ones that led Khavalkin to take the position of European Champion by force and with all the possible applause from the insiders. The same that Tye would have deserved, without that mistake in the final, again to be used as a charge to take back what could have been but wasn't. Sporting stories, rivalries, crossovers that have made and will make this sport great, ready to be rewritten in the shadow of Vesuvius in a few days' time.
Also under the magnifying glass on the eve of the race were Jan Przyrowski, winner of the last FIA race held, Dmitry Matveev, Enzo Tarnvanichkul, Kirill Kutskov and Guillaume Bouzar, all in great form so far.

The great knowledge of a circuit that has been used and seen many times, such as Sarno, will lead to everyone being able to push hard right from the start, and to shave off as many tenths as possible. The previous long test sessions (in addition to the specially organised races), however, suggest that the circuit conditions may have changed, especially with the new asphalt, leading everyone to have to 're-familiarise' themselves with certain aspects that could become crucial. Eyes are also on the weather radar, which, as of today, indicates heavy rain throughout Saturday, the day dedicated to all the heats of vital importance for the weekend and the formation of the starting grids.