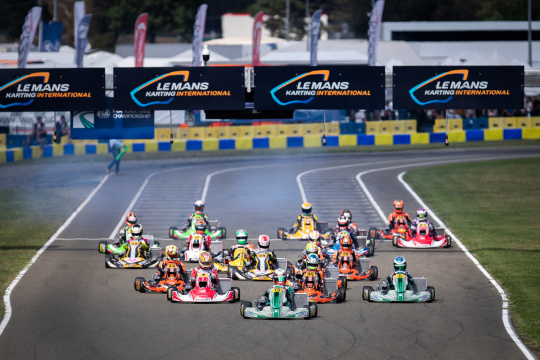 Author: Vroomkart International
Saturday's long programme concluded the direct clashes for KZ and KZ2. Simo Puhakka and Arthur Carbonnel currently lead the rankings ahead of the Super Heats.
A day as demanding as it was interesting at Le Mans, which ended with the last KZ2 heat just run under the artificial lights of the Le Mans kart track. An atypical World Championship for the timing and above all the presence of no less than four categories, but by no means a foregone conclusion in the results, still to be written.

KZ - Puhakka tries the magic season finale
The Finn is heading into the last Sunday of a career World Championship in the best possible way. An almost clear-cut path for Puhakka, capable of triumphing in two heats out of three, securing a second place in the only missed success which, at present, also keeps him in first place for tomorrow morning's Super Heat A. The remarkable run of Puhakka, and of the Tony Kart armada that appeared to be in great shape with the whole chassis/engine package, however, is not the only one. With the same score and almost the same supremacy, CRG returned to express itself at its best in its natural habitat, i.e. titled races, thanks to Viktor Gustafsson. Also for the Swede, two wins out of three and a second place, just against Puhakka. Confirming the great potential of the 'All-Blacks' was the virtual third place and second place for the first Super Heat of Jeremy Iglesias, the home idol ready to play it all with consistency. Space and convincing performance also for the first of the Birel Art, Pedro Hiltbrand with a fifth, a fourth and a third place will be on the front row for the second Super Heats. Top five for pole man and reigning champion Milell, constantly in the front positions but penalised by a nose and 5sec added at the end of the session. Up go the Pex brothers, forced to recover Longhi after a P17 in the last heat, also caused by the aftermath of a contact with Irlando. Tomorrow Super Heat from 12.20.

KZ2 - Carbonnel at home, risk of mockery for Trefilov

David Trefilov is managing to make the most of the chance of success that he had created for himself since the first sessions yesterday with annexed pole position. March without until the last heat of the day, led by the first positions and then sensationally cancelled by a disqualification for technical irregularities that cost him a momentary farewell to the top and 13th place overall.
CRG in great form thanks to the positive effect of the home race on Arthur Carbonnel, constant and above all in pole position overall with three second places, one third, besides the three victories. The leader of Super Heat B will be the Swiss Samuel Luyet for Tony Kart also thanks to his great consistency throughout the entire heat programme. Identical discourse for Jorge Pescador with the other CRG, third overall and in good shape, author of three victories in addition to the useful placings. The first row of the second Super Heat is closed by the first of the "terrible rookies", Cristian Bertuca, hope and confirmation of the "Red Army-Birel Art". Fourth place overall at the moment for the Italian, author of two victories and good placings between second and third, fifth place in the last heat of the evening. Arvid Lindblad follows close behind in the top five with three victories in a row in the last three heats. Good recovery for Daniel Vasile and DR Kart in virtual eleventh place and author also of two heat victories. Super Heat scheduled for tomorrow morning at 11.30 am.