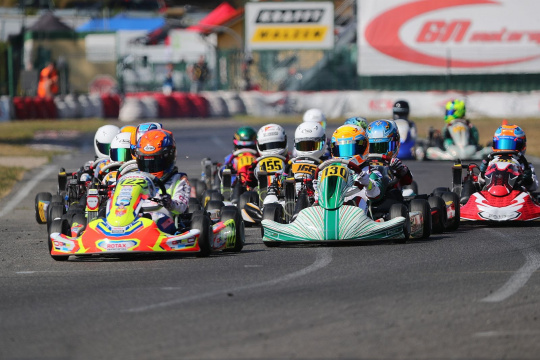 Author: Vroomkart International
The Rotax MAX Challenge Grand Festival was held at the Erftlandring in Kerpen over the weekend, bringing together an enthusiastic line up of new generation Rotax karters to compete at the German circuit rich in racing history the past decades. Two British drivers, Albert Friend in Micro MAX and Jacob Ashcroft in Mini MAX, have come away with the 2022 title.
Renowned for being the breeding ground of Formula One’s Schumacher brothers and Sebastian Vettel, as well as the venue that has witnessed many former motorsport champions in competition, the Kerpen track provided an ideal location for RMC Grand Festival. It was also the first time Chrono Karting of the Netherlands has been able to organise the event on behalf of BRP-Rotax in Austria, following the impact of the global pandemic the past two years. They combined the race program with round 5 of the Dutch RMC.

The youngsters were soon up to speed after numerous practice sessions with their MOJO C2 regulation tyres, as the summer temperature hit the mid-20s. When it came to the racing, the fast and technical layout kept Sunday’s racing exciting for the supporters watching on.  The prizes included two invitation tickets for the winner of each class to the RMC Grand Finals this November in Portugal, so the championship title, the competition and the rewards were all worth fighting for.

In the Rotax Micro MAX category Albert Friend posted best lap during official timed practice with a slim margin of 0.019 seconds over Ryan Rijvers and fellow Dutchman Senn Lindeman. Victory in the Pre-final came down to a battle between the pole-sitter and Lindeman, who was classified the recent RMC International Trophy champion at Le Mans over his rival. In the process of setting best lap (51.131) Lindeman had led the race just minutes from the flag, only to be passed by Friend on the very last lap. In the afternoon Final, Rijvers grabbed P1 in the early stages before swapping places with Friend as the timer counted down. But it was the 9-year-old Pre-Final winner from the SFR Motorsport team who pushed to take line honours over Rijvers. Lindeman finished third then came James van der Pol and Vic van Campenhout.

Fellow British racer Jacob Ashcroft was determined to repeat his younger compatriot’s success and he did so by setting the pace in the Rotax Mini MAX qualifying. Germany’s Luke Kornder in the #101 kart and newly-crowned RMC Euro Trophy champion Boaz Maximov drove the next best times. In the Pre-final, it was the Dutch front-runner Maximov who shot to the front of the field, however, the pole man regained control for his initial victory - also fastest on track (48.456). Behind them, the order constantly changed, Gabrijel Hofmann from Germany holding on to P3. Once more, Maximov got the jump at the start of the Final to lead right up until the closing lap. As he tried to defend, Ashcroft saw the chance and slotted into P1; the Oliver Rowland Motorsport driver confirming his new title and place on the grid in Portimao. Another close race for the podium and minor places followed, Hofmann securing third from Kornder and Mats van Rooijen, up from P12 to fifth. Ashcroft has previously been a Micro MAX class winner in the UK and vice champion at the RMCIT. He said “it was a fantastic weekend at the RMC Grand Festival and Kerpen is an awesome track that I want to come back to race at again”.

Gaby van de Burgt from Chrono Karting was finally pleased to welcome the young competitors and their families to the RMC Grand Festival, saying “It makes me proud and happy to see so many smiling faces, all enthusiastic and motivated to win the RMCGF ticket too. It is nice to hear the friendly comments from the parents and mechanics about being here. I’m even more driven to make this event more fun next year and look forward to seeing new drivers and teams join us. It was a fantastic weekend and I enjoyed eve moment of it!”