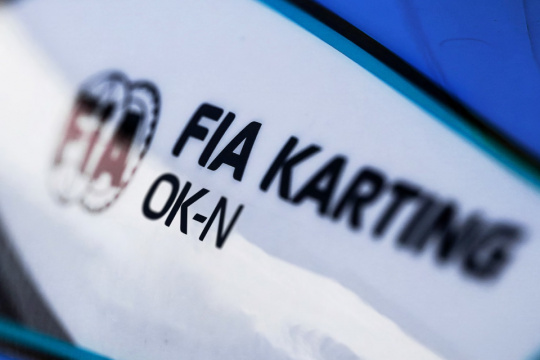 Author: Vroomkart International
OK-N is the category designated by the CIK FIA to revive direct-drive classes at the national level to override single-brands and monopolies. Is it fair to wipe out so many years of work in one fell swoop? (P.M.)
The announcement of the CIK FIA's willingness, with the endorsement of the national federations, to launch two National OK categories had the force of an earthquake in the karting world. Many drivers, teams, and fans of our sport are wondering whether this decision is the one we have all been waiting for for years or whether we are facing yet another misstep capable of undermining the foundations of entry-level karting. Indeed, at this particular time, teams and drivers are questioning whether it is right to continue to invest in single-brands or to wait for the OK National regulations to be defined to make the big leap.

OK, a big category, with small numbers!
For the younger ones, and for those with short memories, let's take stock for a moment. In 2007, 15 years ago, the CIK FIA, followed closely by all the national federations, decided to retire the 100 cc direct-drive or single-gear classes and replace them with the KF: 125cc in displacement, electric start, centrifugal clutch, and, for the most powerful versions, an exhaust throttle valve. On paper it seemed that the future of karting was going to be rosy; instead, the facts demonstrate a resounding failure of this category that remained a club for the wealthy able to spend exorbitant sums. The karts were extremely expensive because of the presence of manually controlled front brakes, sophisticated cabling, and numerous delicate accessories subject to frequent breakage. Racing in KF was a real bloodbath. Drivers in the national categories thus began to flock to the various single-brands, which were cheaper though markedly less performing not only than KF but also than the much-reviled 100 cc.
Over the years, some of the most emblazoned constructors started their own single-brand trophies, with spotty success, related more to the abilities of local distributors than to the category’s real technical value. With the advent of OK, direct-drive 125 single-gear engines with decompression valves to facilitate starting, even the constructor’s most reluctant to admit failure (I remember when it was in vogue to say, “there is no turning back,” which makes me laugh so much today) have indeed turned back by eliminating the centrifugal clutch, complex cabling, starter motor leaving only the anti-vibration countershaft and rev limiter, as well as the simplified version of the exhaust throttle valve.
Mindful of the KF-branded bloodbath, drivers and tuners stayed away from the OK, which, at least in the beginning, needed a break-in period to eliminate all initial flaws and achieve a good level of reliability. Today the OK, duly revised and corrected (elimination of the valve on the exhaust, lower rev limiters), is ready to launch into national championships. Karts finally able to offer noteworthy performance, reduced weights, and that blessed much-sought competition that should lead, under the control of the national federations, to a series of improvements.

Pros and cons of the OK
The OK, compared to a single-brand, offers higher performance, reduced weight, greater simplicity of construction, and the possibility of choosing from several engines so that you do not have to be a slave to the monopolistic tuner who, having found the catch, rents the "good" engine at exorbitant rates. To avoid this malpractice in some championships the engines are rightly sealed and distributed by the organizer.
Since it is then a category under total control of the national federations, there would be a call for competition or tender to choose tires that offer the best value for money and manage to keep entry costs within certain limits. Just the tires, in some single-make championships, have very high costs with mediocre performance and durability, which is beginning to drive away many drivers from the tracks, drivers who cannot afford to spend 400 Euros a day for two sets of tires.
Of course in launching OK categories, there is the upfront cost issue, but it is worth a try. All the OK talk, however, revolves around one essential element, the most important: the increased performance and greater selectivity of the category. Anyone who has tried a single-brand kart knows exactly what I am referring to.

Pros and cons of single-brand racing
Single-brand has always been a cheap and easy way to approach motorsports competition. In karting, however, this is not always the case. If, for example, an engine has been in production for 20 years, there is no justification for spare parts to cost the same as those of a newer generation or even more! In 20 years the costs of molds and tooling are more than amply amortized or absorbed and, in the spirit of promotion, the price of spare parts should be significantly lower. This has often not happened, and to see a piston from a one-make engine cost 30 to 50 percent more than a similar part from a KZ engine is, to say the least, upsetting - as does paying over 200 euros for a set of mediocre tires and being able to run on them for just 2 rounds before having to replace them. There is always a need for a one-make, but not with these prices!
But, for the same engine running costs, with tires that perform better and last longer because they are chosen on the basis of a tender and not on the basis of an organizer's convenience, I want to see who will race with a vehicle that performs more than 2 seconds per lap less! Surely if a piston had cost 50 Euros, if a good set of tires had been offered at 140 Euros and had been good for a full day while maintaining excellent performance, if entry fees had been reasonably low, and, most importantly, if the performance had not been so mediocre, competition from an OK National would not have scared anyone off! Maybe someone is starting to worry about the obvious risk that the little game is on its downhill path to oblivion...

Like to win easy, eh?
Someone made a rather questionable criticism of the advent of the National OK, or rather the National OKs since there will be 2 (Junior and Senior): what if international drivers also show up at the national races to train? Ah, like to win easy, eh?
For those of you with short memories, let's say right away that, in the days of the 100cc, the big-name drivers often and willingly raced by clashing with local drivers and specialists of certain tracks, often finding the competition tough to beat. I myself, in my days as a driver, measured myself against the holy monsters of international karting, scoring what were enormously gratifying battles against them, far greater than taking home a plastic cup for winning ahead of two dumbasses or knuckleheads. Racing against the great champions allows young people to learn and grow, to find and know their limits, and to show off in front of the most important teams and manufacturers. As they used to say "he who flies counts...," and he who doesn't fly... had better change sports or stop whining when the going gets tough!