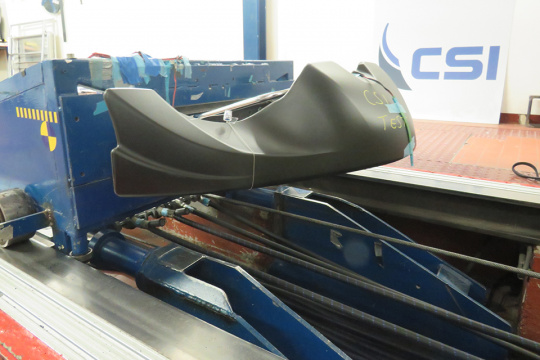 Author: Vroomkart International
Whether impressive or not, in karting we have learned to live with crashes, an inevitable consequence of a sport whose technical evolution - hand in hand with the presence of new and faster circuits - has led to a significant increase in performance and thus a different type of accident. We visited CSI S.p.A., the FIA-accredited testing center, to find out how the crash tests that the International Federation obliges manufacturers to perform to homologate bumpers, bodywork and fairings are carried out.
The issue of fairings in karting has always been a hot, divisive topic, not least because of some of its regulatory and sporting implications, but one that sees very heterogeneous positions held both in the paddock and among new and old school karting practitioners. It is a transversal issue, which affects at the same time drivers, manufacturers, federations and, not least, the physical performers of the tests that classify a device or vehicle as suitable or not, starting from the assumption that the kart is a unique vehicle in its genre, on which it is not possible to transfer the work done in the single-seater sphere, which are part of the same supply chain, from Formula 4 to Formula 1. The kart is there, just a step below, even though we are talking about a vehicle that structurally has little in common with a modern racing car.
The nature of the vehicle
Karting is a sport, albeit a four-wheeled one, a "hybrid" between motorcycling and car racing, from the point of view of the openness of the vehicle and the physical exposure of the driver. The idea of crash testing present in the common imagination perhaps hints at forms of testing some form of "protective or safety cell," which instead, by its very nature, karting will never be. It is precisely the fact that it envisions the driver or rider as an "integral part" of the vehicle – as a motorcyclist is for a motorcycle - that renders these tests different from those performed for cars. In relation to fairings, therefore, we cannot think of them as having a primarily 'preservative' role for the physical integrity of the driver, but simply limiting the energies involved in the event of an impact, whether this occurs against a hard surface or other running vehicles.

The typology of testing
We start with the FIA directive, of course, contained in the FIA Règlement d'Homologation/Homologation Regulations (Latest update: 01.02.2021) downloadable by anyone on the Federation's website. Starting with the front bumper, the tests begin by mounting the bumper by means of a special attachment - whose specifications are set by the Federation - on a trolley weighing about 230 kg that is 'launched' at a speed of about 10 km/h against a rigid wall so that the bumper alone and its support 'work' in absorbing the impact. This is the classic approach used in dynamic testing in passive safety, where the test specimen is made to impact against a stationary obstacle. It is therefore the combination of the "bumper + support" elements that undergoes the test. The combination then of the two elements must ensure that at the moment when maximum deformation is reached, and the fairing/bodywork is involved, maximum energy has been dissipated. In fact,at that point, energy would be directly transferred to the driver (who, let's remember, is an integral part of the vehicle, so, energy on the bodywork = energy on the driver's body). The purpose of the test is to measure the peak deceleration that the trolley undergoes, which must be kept as low as possible in the first part of the impact, so that DEFORMATION and DISPLACEMENT of the elements deputed to absorb energy can be evaluated: the bumper and its supports. The FIA standard calls for energy of about 920 Joules to be applied with a tolerance of +- 30J to provide meaningful data in evaluating the ability of the bumper to dissipate and absorb as much energy as possible (we are talking about deceleration values that must not exceed 15G). The purpose is to keep the deceleration peak as low as possible (the higher this peak, the greater the impact of the collision on the driver) and contain a displacement of the bumper, which in the case of the kart is 40 mm (4 centimeters!). To be clearer: the bumper, in the impact can "retract," that is, deform and then perhaps return to position. This being compressed by it must ensure that there is always, however, at least 40 mm from the frame -and thus from the driver.
The evaluation criterion is similar to that used for single-seaters, or rather: the data are interpreted in the same way, because the objective is to safeguard the driver's lower limbs. It is obvious, however, that in karting we are talking about a vehicle that, because of its small size, has less opportunity to dissipate energy than the safety cell of a single-seater - where the space available for shock absorption - which keeps down the peak deceleration - is significantly greater.

Considerations about the type of testing
The basis on which these tests are developed is accidentology ("accident science"), a database on which testing standards are defined and set and which represents the best possible basis. The accident archive or repository grows each year and provides new possibilities for assessing possible risks not previously considered. Like any laboratory test, those performed by CSI must be reproducible and repeatable, because that is the purpose of laboratories: to provide data according to shared standards. For this reason, an FIA representative may be present during the tests, which end with the homologation of the fairings or a request to repeat the tests in order to fall within the parameters set by the Federation. The same applies to rear bumpers and side bodywork and bumper (it must be said, in fact, that the crash test is performed with the worst possible scenario in mind: that of a vehicle hitting something crushproof and firmly anchored to the ground, a so-called rigid wall, a situation far worse than events that can occur on the track.
We should not forget that, in the type of accident that we often see on the track, when, for example, a spinning kart is hit - albeit at speed - by another kart, the energies involved are definitely lower than in a laboratory crash test, since much of the energy is dissipated by the vehicles that are precisely, in motion and that (fortunately) absorb, as well as partly the driver, only a small part of the energy. Thinking about the Bondarev accident in Zuera, for example, in which the karts collided head-on, we can consider that the bumper certainly made its contribution in absorbing the impact, but that at the same time, some accidents, as they develop, involve and will sometimes involve physical consequences. We are talking about a vehicle for whose intrinsic safety much has been done in the last two decades, and despite those who say they are totally against "inflated plastic" protectors, we think that today's karts are quite a lot safer than in the past.
When we say "once upon a time without the bumpers (front and rear, ed.) you knew you were risking your feet and therefore you would think twice before doing something stupid" we are approaching the problem from the wrong direction because we confuse the race conduct and proper manners of the drivers with the safety of the vehicle. Comparisons between different eras are sterile, and it is not on these kinds of parallels or comparisons that, fortunately, research has stopped: in so many things today, given the technical evolution, we are less careful than in the past precisely because of the fewer consequences in case of a mistake. But is letting kids (or adults for that matter) needlessly hurt themselves on the track really the best way to educate them about sportsmanship or fair play? The work on safety never stops, as evidenced by the data from centers like CSI, which give the rules their due. The rest of the work on safety and respect for the opponent, especially the work in the drivers' heads, we can continue to do without that work on the vehicles and tracks stopping. 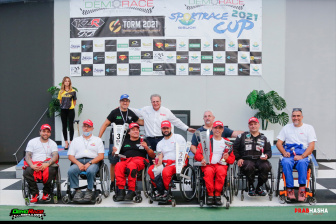 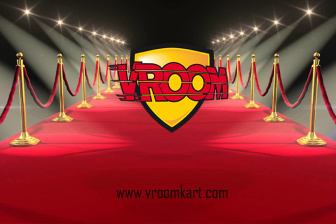