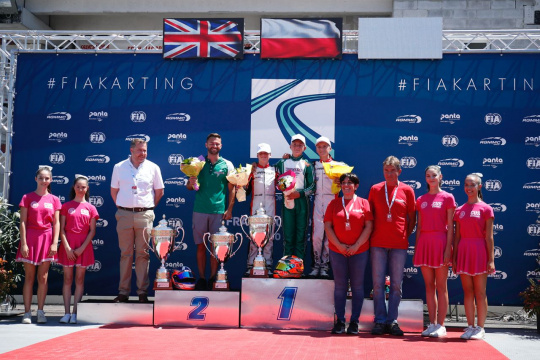 Author: Vroomkart International
The FIA Karting 2022 season has its new European Champions. Two spectacular races at Franciacorta, Anatoly Khavalkin (OKJ) and Kean Nakamura-Berta (OK) are Champions.
The one at Franciacorta was one of those Sundays to remember, not only for the great expectation due to the awarding of the continental trophies, but above all for the great show before and during the race. As planned, Raffaella Giacomini and her staff put on a structured pre-race show full of twists and turns, from the corps de ballet to the choir that sang the Inno di Mameli, the ribbon-cutting ceremony for the circuit's second birthday, fireworks, smoke bombs, the plane's grazing passage, and above all the nine parachutists on the track. A spectacular moment worthy of the context and above all perfect to introduce two heart-stopping finals decided only in the last laps of the race.

OKJ - Przyrowski wins the race but Khavalkin is the new European Champion
Seven leader changes could make one think of a 60 Mini final and instead it was the last final valid for the OKJ European title. One of the most beautiful races of the last few years the one at Franciacorta made of twists and turns. At the start it was Khavalkin the first to dangerously risk contact with an overly aggressive Enzo Tarnvanichkul at the start. In the general confusion, however, it was Nathan Tye who climbed the slope perfectly after a particularly difficult weekend without too much grip according to him. On the strength of a good race pace, the Englishman took the lead for just two laps but remained in the podium zone and virtually champion by a handful of points over a slightly stunned Khavalkin from the start. After the first few laps, the situation became even more heated with the return of Khavalkin and Kirill Kutskov behind him, who was fast but later involved in a crash with Tarnvanichkul. Confused and agitated phases those of the first laps, resolved on lap ten by the leadership recovered by Khavalkin, who was good at gaining time in the last sector and especially at the last braking. Just as good was Jan Przyrowski, constantly on the pace and out of trouble, a direct adversary for the reins of the race taken from the hands of Khavalkin in the middle of the race. There was still plenty of action in the final stages with a small drop in performance by Khavalkin, who was attacked by Bouzar, Tye and Helias but without losing the virtual leadership with a good margin of points. The key episode that, in fact, ended the European Championship was recorded on lap number 19, the penultimate passage. Serious misunderstanding between Helias and Tye, who came to blows in turn four with Helias in total coverage of the inside line and probably ahead of the braking according to the prediction of Tye, sensationally author of the dangerous collision lethal for both and for the championship standings of the English driver. On the finish line at Franciacorta, glory and first win of the season (fourth different winner in four races) for Jan Przyrowski followed by Zac Drummond, author of ten recovered positions, third Anatoly Khavalkin. With his third consecutive podium finish (with the exception of the forced absence at Zuera due to bureaucratic problems), the Russian driver became European Champion for the first time, withstanding all the attacks and risks during a historic final. Eighty-six points for the Parolin driver, sixty-five for Przyrowski the new vice-champion and sixty-four for Tye in third place.

OK - Powell winning but mocked by Nakamura, newly crowned Champion
It was a Mercedes vs Alpine battle in the OK Senior final with Junior Teams members Alex Powell and Kean Nakamura-Berta absolute protagonists. The Jamaican of the Mercedes house did nothing but confirm his great state of grace after the victory in Sweden, a screaming start and eight positions regained in just one lap, valid to take the lead in the race and resoundingly in the overall standings. From the second lap onwards, Powell became a spectator in a long-distance fight with Kean Nakamura-Berta and Joe Turney, who had a black weekend and was out of the points. Even in the case of the Senior, the key episode came just before the chequered flag and was Nakamura's overtaking move on Giltaire, still among the best in the final. A decisive and decisive overtaking move to gain the two points needed to overtake Powell in the overall standings and become the new European Champion without winning. Honour to Alex Powell, first at the finish line with a two and a half second margin, Giltaire third. Unhappy ending for Enzo Deligny only fifth at the finish after dominating the weekend, identical speech for Nicolò Cuman seventh at the finish, both among the most proactive.