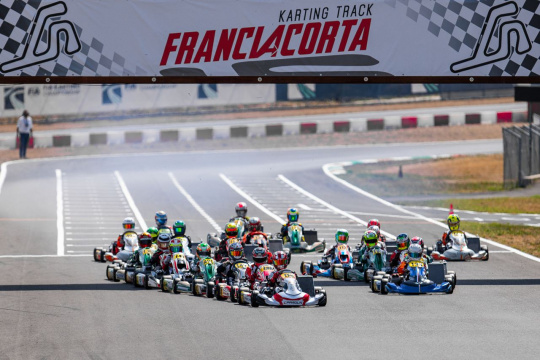 Author: Vroomkart International
The busiest day of the Franciacorta programme goes into the archives with a solo by Parolin team-mates Enzo Deligny and Anatoly Khavalkin.
An eventful and, as expected at the last round on the calendar, tense heat programme for all the drivers on the track. It will be a European Championship that tomorrow will reward those who have proved to be as flawless as possible from all points of view. Since yesterday and especially today, the contenders for overall success have been playing and racing on the edge of detail, already of vital importance today.

OK - Deligny, the opportunity is golden
So far the French Parolin driver is simply unrivalled at Franciacorta. From the pole position gained yesterday to the five victories out of five heats, Deligny has never made a single mistake, simply concentrating on flying towards heavy points and the pole position for the first Super Heat. The Frenchman's pace is frightening his rivals in the overall standings, which are now more open than ever and ready for a resounding turnaround.
"Title" of first of the outsiders and protagonist of the weekend largely in the possession of Nicolò Cuman with three victories and a second place confirming yesterday's great qualifying. Behind the Italian, perfectly in the middle of the fight for the European Championship, Kean Nakamura-Berta keeps pace with his usual great consistency that, if well exploited, could become decisive tomorrow. Maksim Orlov also had a good Saturday with a fourth place overall, Sweden's Caspian Hagman fifth.
Saturday's news is the more bitter than sweet day of leader Joe Turney, who was forced to climb from the bottom after a less than ideal time attack on which also weighed a retirement in the last heat of the day (race accident). The British driver will have to make up for it completely tomorrow if he still has any hope of success.

OKJ - Khavalkin head on
Anatoly Khavalkin has no intention of stopping in his chase for a place in international karting history. Having overcome yesterday's legitimate nervousness, Khavalkin went into cannibal mode by going head first with four heat victories (always starting from the second row) and a harmless second place. First position, therefore, and start from pole for the first Super Heat tomorrow morning, waiting for the final showdown. Excellent time table also for Poland's Jan Przyrowski, the only one to keep up with Khavalkin so far with three victories to his credit and the leadership of the second Super Heat. Thai driver Enzo Tarnvanichkul, third overall with three high points during the day and mathematically still in contention for the overall victory, made an impressive recovery. Provisional top five for Kirill Dzitiev and Kirill Kutskov.
Bitter Saturday also for the leader Nathan Tye, struggling with a lack of grip and a forced retirement in the morning that forced him to the back of the field.

Tomorrow Super Heat starting at 10.10 a.m. Expectation also for the pre-race show in Franciacorta with a dance troupe, choir and nine parachutists who will carry the flags (Italian and those of the authorities) directly onto the starting grid. OKJ final at 13.15, OK final at 14.10).