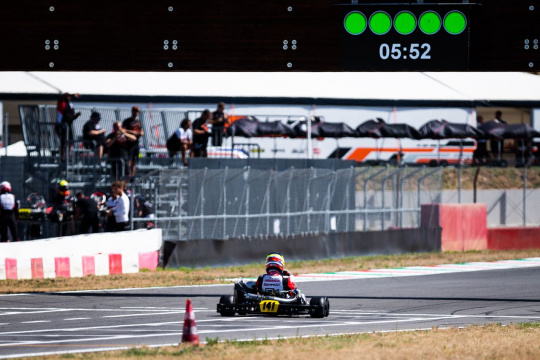 Author: Vroomkart International
The last qualifying sessions of the 2022 European Championship go into the archives at Franciacorta with the pole positions of Jimmy Helias and Enzo Deligny.
A rather eventful morning for the European Championship at Franciacorta, which, to all intents and purposes, has come into its own. Some confirmations and numerous twists and turns in the first general classifications, which heralds the great spectacle that awaits us from the afternoon.

OKJ - Helias, what a lap!
The French driver had no choice but to set the fastest time overall during the first qualifying session and then stand back and watch his rivals, all at a fair distance. A practically perfect best lap of 48.770 was enough to close a minimal but significant gap on the second best time set by Nathan Tye. The current leader of the Sodi Kart home standings stopped the clock at 48.831 with a gap of +0.061sec. An excellent performance in any case, which will allow the Englishman to start in first position for the heats, vital for the overall classification.
Behind the leaders of Group A and B, third overall time in the hands of Kirill Dzitiev in 49.027 for Group C. The last three group poles were completely unprecedented with Matias Orjuela in front of Group D and still competitive after his great win at Cremona in the FIA Academy Trophy. Group pole position again for a Slater in OKJ, this time in the name of Alfie. The list of poles is closed by young Maria Germano Neto at her first outstanding performance in the FIA Karting field as a Ferrari Driver Academy driver.
Seventh time for Anatoly Khavalkin, second contender for the title of European Champion, will be on the second starting row in Group A.

OK - Deligny starts from pole position
Also in Senior the pole position speaks French thanks to Enzo Deligny's great start. One of the best profiles of the season, the Parolin driver placed the first kick of the weekend officially opening the games for the race for the title of European Champion with the best lap in 46.754.
Friday was also a happy one for Nicolò Cuman, the first of the Italians and pole man in Group B with +0.163sec from the best lap. Behind Cuman, Kean Nakamura-Berta limited the damage on Deligny and gained something on the rest of the challengers in the overall standings, followed in the same wake by Alex Powell just behind in Group D. Walther David and Tuukka Taponen take pole positions for groups E and F. Bitter start for Turney only 30th overall and obliged to climb up immediately.