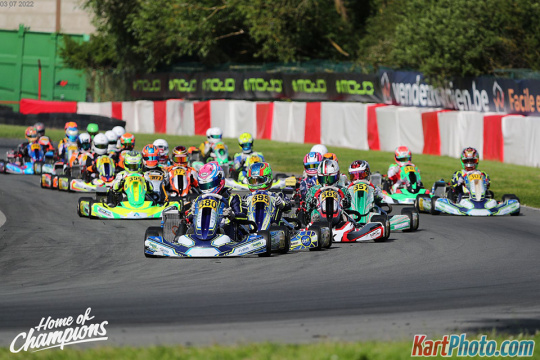 Author: Vroomkart International
With all six Rotax-powered classes in competition, it made for a fitting spectacle for those in attendance, with wonderful sunshine all weekend long providing the perfect conditions for racing.
In Micro MAX, the Netherlands’ Senn Lindemann continues to lead the standings, having won all four races over the course of the weekend to continue pushing towards a championship crown at the October finale in Genk. Even with an incident with closest rival Vic Van Campenhout (#24) on the final race on Sunday afternoon giving the #4 a five-second time penalty, the youngster was still able to secure the win.

The Belgian would still hit the runner-up step of the podium, taking second place in the first three races of the weekend, putting him still in contention for the finale. It was another consistent race weekend for the UK’s Jack Freeman, who took third overall in the event results, ahead of Belgium’s Ryan Rijvers would also be on better terms around the circuit, taking two fourth place and two second place finishes, in front of Denmark’s Erik Brandsborg.

Toms Strele (#123) gave everyone in the Mini MAX ranks something to think about, having been the class of the field, taking three wins and a third place to hit the top step of the podium with 91 points. The Latvian was ahead of both the Netherlands’ Mats Van Rooijen (#103) and Boaz Maximov (#130), who once again showed their pace, but suffered their own dramas during the weekend.

Albert Friend (#199 – GBR) had a difficult start to the weekend on Saturday, as a technical failure put the SFR Motorsport driver on the back foot on qualifying, but his pace was exemplary, managing to take a second and fourth place finish along the way to help him finish fourth, ahead of another fast young dutchman in the form of Max Sadurski (#119), who rounded out the podium.

It was a welcome trip to the top step of the podium in Junior Rotax for Belgium’s Tom Braeken (#218), as the SP Motorsport driver showed true grit to showcase his credentials in the two races on Sunday, winning the Pre-Final and finishing third in the Final. Tommie Van Der Struijs (#254 – NED) also had lightening quick pace all weekend long, but his bad luck in the heats turned to good fortune in the finals on Sunday.

He would finish fifth in the Pre-Final, but picked his way through to take the win in the Final Sunday afternoon to finish as the event runner-up just five points off Braeken. Enzo Bol (#204 – NED) would also be in the mix, taking second in the Pre-Final, before a five-second pushing penalty would drop him from second behind Van Der Struijs to ninth, but still enabling him to round out the podium.

It was a clean sweep in Senior Rotax for Dan Holland Racing’s Kai Hunter (#395 – GBR), who was untouchable all weekend long, culminating in a dominant display on Sunday, taking the top step of the rostrum, with his closest competitor being TEPZ Racing Team’s Eliska Babickova (#357 – CZE), who made a significant impact in the championship dynamic whilst the rest of her family were at Silverstone supporting elder sister Tereza, who is competing in W Series.

Two-time defending champion Sean Butcher would round out the top three on the podium, taking a third and fourth place finish to bring home some silverware, with JJ Racing’s Kaï Rillaerts (#374 – BEL) just five points adrift in the event result, but still holds a narrow lead over the championship after the second round.

Germany’s Janne Stiak (#339) would be the clear dominant force in the Senior B-Final, which saw the Kraft Motorsport driver pull away from the rest of the competition, almost 4.1 seconds ahead of France’s Maxime Seranzi (#356) in second, with Denmark’s William Kristensen (#349) completing the top three.

Leonardo Baccaglini was a force to be reckoned with in DD2, taking pole position in both qualifying sessions, along with securing the weekend win by taking two wins and two second place finishes, whilst Strawberry Racing’s Mark Kimber (#410) now takes the lead in the standings by 51 points.

The Briton was able to place in the top three all weekend long, ending up second on the rostrum, whilst the defending champion, Belgium’s Glenn Van Parijs (#401) was very much having to exercise damage control during a difficult race weekend around the 1,388-metre circuit. Denmark’s Mathias Bjerre Jakobsen would have a consistent weekend of racing, taking the final step on the podium, seven points ahead of Estonia’s Ragnar Veerus, who continues to hold third in the standings.

There was a change of leader in the standings after Mariembourg for DD2 Masters, as France’s Paul Louveau (#564) was simply the class of the field, securing not only a perfect weekend with winning the Pre-Finals and Finals on both days, but with that comes a slender ten-point lead in the title race.

Lithuania’s Martynas Tankevicius would use the weekend as a training exercise for the penultimate round of the Rotax MAX Euro Trophy, but would still provide some stellar overtakes to secure the runner-up spot, in front of Belgium’s Ian Gepts, who realises that there will be a clear fight for title glory in just under three months’ time.

Just under 90 days remain until the BNL Karting Series will make its emphatic return to the “Home of Champions,” Karting Genk, as the Limburg-based circuit will host the third and final round of the season on October 1st and 2nd, to see who will be crowned as champion to conclude the championship’s 15th anniversary season in style.