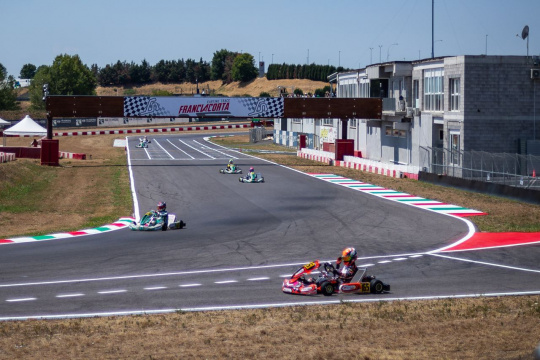 Author: Vroomkart International
The OK and OKJ European Championship 2022 has reached its last act. It will be Franciacorta to award the continental titles this weekend.
An event that has been awaited since even before the actual start of the 2022 season, not only because of the possibility of a fight for the Champion title right up to the last race, but above all because of the advent of a new track on the international calendar. Franciacorta is therefore preparing to enter the history of karting with plans for 2023 already widely confirmed when, the Italian venue will be home to the World Karting Championship.

Both categories arrive at the start of the weekend with two big question marks: Who will be the European Champion and with whom will they fight for success?

The Junior opens up a range of possibilities that is not easy to decipher on the eve of the event. What is certain is that with three different winners in the three previous races, the spectacle seems guaranteed. The main protagonists are Nathan Tye and Anatoly Khavalkin, Sodi versus Parolin by a mere four points, the undisputed merit of Khavalkin and the weekend won in Kristianstad, valid to close a gap that seemed unreachable after the absence in Spain. Calculations in hand (with eight drivers still effectively in the running), Tye and Khavalkin are not the only ones who could win this European. Also to watch out for are Dmitry Matveev, the first winner of the year and currently third in the general classification, Enzo Tarnvanichkul and Renè Lammers to close the virtual top five. Waiting for the outsiders of the weekend, ready to turn the tables.

More "narrow" discourse in OK Senior with potentially still six drivers mathematically in the fight and three big eve's expectations. Joe Turney is called upon to achieve his third victory out of four races, which would obviously close the accounts by handing the title to the Briton. The fight is wide open thanks to the exponential growth of Kean Nakamura-Berta and Alex Powell, respectively in second and third place in the general classification. The double zero of Portimao is currently weighing on the Jamaican's time table, but the victory of Kristianstad stands out, for the reigning OKJ World Champion the consistency in the placings is rewarded but the stage success is missing.

After today's unofficial free practice, from tomorrow the European Championship will go live with official free practice, qualifying and the first heats. The programme of direct confrontations, as usual, will be completed on Saturday before the grand finale on Sunday 10 July with Super Heats, pre-race show and category finals.