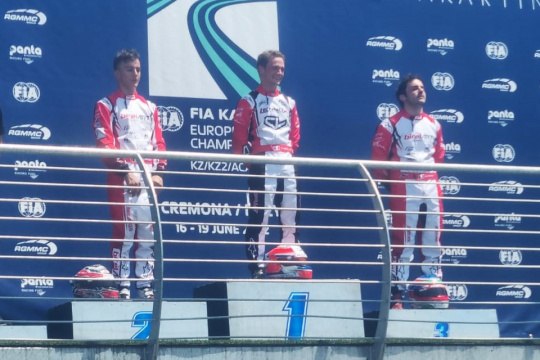 Author: Vroomkart International
The Frenchman (Birel Art/Tm) confirms Genk’s extraordinary performance and wins by authority. In KZ some protagonists failed and Ippolito (KR/Iame) is good at asserting regularity. Denner (Sodi/Tm), the favorite on the eve disappoints, Hiltbrand (Birel Art/Tm) wastes a great opportunity with a start to forget.
KZ2
Leuillet, who starts 4th, can race his  Final looking calmly at how things are going and settle for third place, which would guarantee him the title in any case. Trefilov, his closest opponent, has never been a protagonist over the weekend and starts further back. The Birel Art quartet takes the lead of the race with Piccini mocking the Poleman Eibner and taking the lead followed by Bertuca. Lindblad, a possible protagonist in the predictions, "hangs up" at the start and starts again when all the riders in front of him have parked. On lap 4 Leuillet makes it clear that perhaps he will not be satisfied with the result as an accountant but will try to win the race and passes Bertuca putting himself behind Piccini. The trio will lead the race without exchanging positions by slightly detaching Eibner until the 15th lap in which Leuillet breaks the delay and passes Piccini, a maneuver that Bertuca also takes advantage of, who from that moment settles in the wake of the race leader confirming his weekend of grace that will take him to the second step of the podium for the first time in an FIA race. Piccini, stable in third place, completes the triumphal podium of the house from Lissone with the new European Champion who on lap 22 also sets the race record, the only one to drop below 46 ”. For Leuillet, after Genk, another superb weekend that makes him one of the few drivers to win the title by winning both stages. For the Lennox-Leclerc duo this is the second KZ Title after that of 2020 with Viktor Gustavsson. For the Italian engine manufacturer Tm, this is the fifth KZ2 European Title in a row, on a total of 86 titles.
Final Results
KZ
With 8 drivers fighting for the Continental Title, the Final looks like one of the potentially spectacular in recent years. Hiltbrand, who has conquered the pole thanks to perfect heats, runs into a very bad start. He is passed by several riders and is 8th in the first lap, while Senna Van Walstijn, who started from second position, takes off followed by Ippolito, who with an eye to the general classification and the predestined opponent Denner in the rear, can dream big. Interposed among the potential winners of the title, the OTK's outsiders Valtanen and Puhakka can, even if out of the fight for the championship, lead the balance. However, Viganò is the only contender trying to emerge, given that for the others the race turns out to be more difficult than expected, while the former World Champion Iglesias (CRG) is also the author of a good race: for Hiltbrand, with positions now stable around the 10th lap, any desire to get back into the fight seems to have vanished. While Van Walstijn races to himself and Ippolito always controls off by about a couple of seconds, behind the news are the withdrawal of Puhakka who leaves the third position (and the title of Vice-Champion) to Viganò and the definitive exit of Denner. following a contact with Stan Pex. The order of arrival consecrates Francesco Ippolito as the new European Champion, a result that for the Tuscan, who gives the first title to KR in the categories with the gearbox, is an extraordinary career achievement.
Final Results