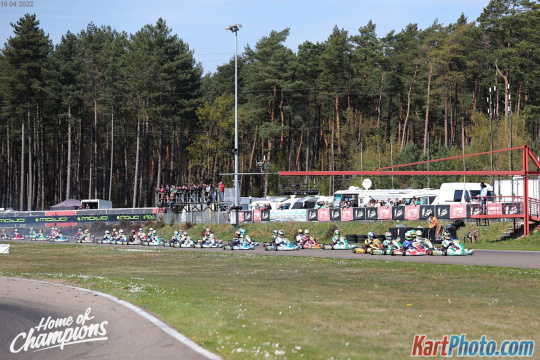 Author: Vroomkart International
After a lengthy break after the first round of the 2022 season, which took place at Karting Genk in the middle of April, the first weekend of July signifies the halfway point, as Mariembourg’s Karting Des Fagnes will provide a welcome backdrop for over 120 drivers that have registered thus far.
First introduced on the calendar back in 2019, the 1,388-metre circuit will provide a stern test of fast, sweeping sections, before a technically challenging second half of the track will showcase who has the best set-up to manage both areas of the track, based in the Namur province of Belgium.

In Micro MAX, it is a very close affair between the top three drivers, with the standings being currently led by the Netherlands’ Senn Lindemann, who took three wins out of four last time out at Genk.

Belgium’s Vic Van Campenhout is only 19 points behind and has a chance to take the lead in the championship, whist Great Britain’s Jack Freeman has taken to racing in Europe like a duck to water and rounds out the top three on 65.

It's even closer in the hunt for this year’s Mini MAX crown, which was won last year by Belgium’s Mateja Radenkovic. The top three drivers are covered by 22 points heading into this round, as BNL and RMCET points leader Boaz Maximov(#130 – NED) took two wins and second place finishes.

He leads countryman Max Sadurski (#119) by only four points after the first four races. Alexander Van Meeuwen(#127 – BEL) is also on the verge of putting his name forward as a definite contender, having only a further 18 points to second.

Junior Rotax showcased the very best of talents in the class at the opening round, but it is Denmark’s Mikkel Pedersen(#255) who has a slender lead of just six points, based on the overall results from Genk.

British drivers round out the top four in the standings, as Vinnie Phillips (#287) is on 66 points, in front of Strawberry Racing’s Ethan Jeff-Hall (#297 – 62 points) and Dan Holland Racing’s Scott Marsh (#222 – 49 points), with Croatia’s Leon Zelenko cin close pursuit.

Senior MAX is getting spicy in the battle for supremacy, as Belgium’s Kaï Rillaerts was very much untouchable at the “Home of Champions,” as he leads the way in the championship on a maximum score of 100 points, with two-time defending champion Sean Butcher being the closest competitor to the JJ Racing driver, being only 24 points behind.

Eliska Babickova (#357 – CZE) leads the charge for third place, as she currently holds this place in the standings, but is closely followed by other pedigree driers who will be fighting hard next time out, including France’s Paul Fourquemin,reigning RMCET champion Callum Bradshaw and Canadian racer Jason Leung.

Glenn Van Parijs is at the top of the DD2 tree, when it comes to the championship lead after the opener at Genk, but the Belgian with Bouvin Power has got a clear fight on his hands this year, as Great Britain’s Mark Kimber, who won a second RMCGF title last year in Bahrain, is only five points behind. Estonia’s Ragnar Veerus also has a claim to being at the sharp end of the grid in third overall on 63 points, as a win and a third-place finish for the #433 has put him into contention.

Belgium’s Ian Gepts made it count at the first round of the season by taking a maximum score of 100 points, putting him ahead of nearest rival Paul Louveau by nearly the same amount of points as a race win in the series. Louveau, who was last year’s RMCET champion, is just a single point ahead of Germany’s Michael Becker in the battle for second, whilst Christophe Adams (#555 – NED) and Luca Fillipone (#582 – BEL) round out the top five places.

“It might have been a long wait between the first round at Genk until now, but we at the BNL Karting Series are really excited to see how the championship dynamic changes at Mariembourg,” said series organiser Esmée Rosman.

“It may be our 15th anniversary season, but we are still very passionate to see such great talent come through this championship, and the racing is looking very promising at Karting Des Fagnes in early July.”

The series goes back into full throttle in just over three weeks’ time at Karting Des Fagnes between July 2nd and 3rd, the weekend before the Rotax MAX Euro Trophy hits the penultimate stage of its season.