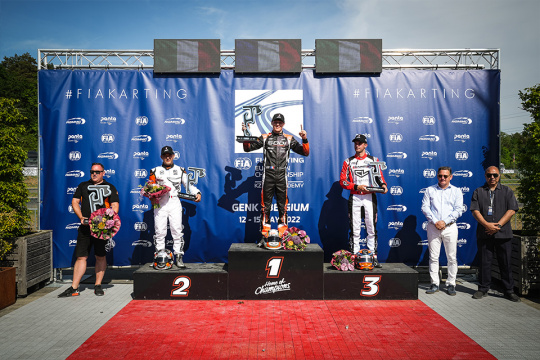 Author: Vroomkart International
After the great spectacle of Genk, it will be Cremona's turn to close the European Championship of the classes with gearboxes, completely open to possible scenarios.
The European KZ and KZ2 Championship has arrived at its last stage, going through a process which, as usual, has been both demanding (unfortunately of only two races) and exciting. Before even talking about the track, it must be remembered that the calendar underwent changes even before starting, not so much for the dates as for the location after the facts concerning the closure of Adria (the original venue of the last round on the calendar). A change of track that saw the ACI look for a valid solution in order not to lose the home race, finding it in Cremona, a totally new circuit, recently rebuilt and above all unprecedented for all the drivers present.

A first time of fire for Cremona, which will have no term of comparison with FIA Karting races, if not the numerous test sessions of the previous months and weeks carried out by all the top teams, just to arrive in the best conditions at the first real timed session. From the comments of the paddock, some had defined the Italian track as difficult for overtaking, especially counting the number of hairpin bends and 90-degree corners that leave no room for error. Comments that at the same time pointed out the good level of grip, thanks to a new asphalt, another important fact, especially in the last period with the chaos (for now returned) of the tyres.

The impression is that of a track to be discovered depending on the conditions and especially as the sessions go by and the great unknown of the Academy Trophy between one KZ session and the next, not always well seen by the drivers. The last two corners, the long straight and the descent to turn two should reward the best top speeds and probably also the slipstreams.

All premises that leave room for the imagination, right from qualifying which is even more crucial, especially for the drivers in front who will be playing it all for the title fight.

KZ - All against Denner?
Genk's number one start can only lead to the Frenchman starting the weekend in Cremona as the super favourite to win the European Championship. Denner together with Sodi were the authors of what has to be defined as a perfect weekend, starting from the qualifying and closing with a race conducted in such an extraordinary way as to make victory look easy. Unlike last year, Denner's awareness is greater, a strength to be exploited right from the start. The Frenchman, however, will not be able to sleep too soundly, thanks to a Matteo Viganò decidedly on form and first of the Birel Art chassis. The Italian, together with Ippolito, was Denner's direct pursuer in the Belgian round, also taking Pedro Hiltbrand behind him in search of immediate redemption together with his Birel Art colleagues, Riccardo Longhi and Marijn Kremers. Eyes also on the Pex brothers with Jorrit definitely in contention for yet another title, luxury outsiders represented by Celenta, Travisanutto and Iglesias for the CRG colours.

KZ2 - Leuillet and the will to succeed
For Tom Leuillet, too, the same should probably apply as for Denner. The French driver of Lennox Racing didn't do anything wrong at Genk, taking the spoils absolutely full and even more easily than his colleague, definitely by surprise. The same surprise that over the course of the heats became a certainty and during the Genk final materialised into half a feat. If Leuillet were to repeat the same race pace, at least, at Cremona there would be no doubt about the outcome of the KZ2 European Championship. However, even in this case, the competition is fierce and represented first and foremost by David Trefilov, the only one to keep up or almost keep up with Marcus Kajak and Arvid Lindblad, probably the biggest suspect to blow all plans to this point.

The weekend will officially start with free practice on Thursday and then become official on Friday with the last free practice and qualifying sessions. Heats expected on Saturday. super heats and finals on Sunday 19 June at 14.30 (KZ2) and 15.30 (KZ), visible in streaming on the FIA Karting YouTube channel.