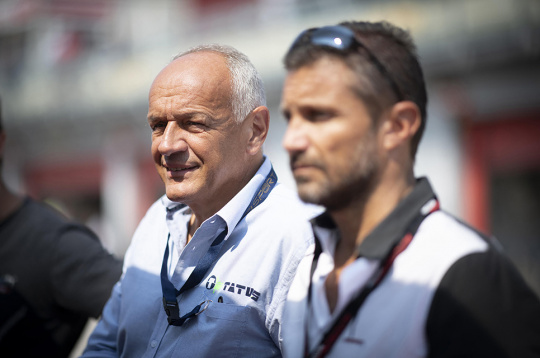 Author: Vroomkart International
The President of Tatuus, introduces us to the F.4 T-021 and shares with Vroom some considerations about the Motorsport industry. (F.M.)
It's the icon of the passage to car racing and an increasingly greater flow of drivers are pouring into the F4 championships. You, on the other side of the "barricade", what do you think about the young age of the drivers arriving in single-seaters today: the trend compared to the past is at least two/three years younger - with relations and connections. In what way is this single-seater especially suitable for such young boys and girls and in what aspects of the design has this been taken into account?
«The F.4 introduced by the FIA in 2014 immediately proved itself to be an excellent car for the transition from karting to auto racing; this due to a set of factors desired by the FIA, first of all, the safety aspect; never before, from F.4 to the successive F.Regional and from this year with the new F.4 2nd generation, has this aspect elevated so much, which together with the car’s technical content and a calculated in-built reduced aerodynamic balance has allowed us to create a car that’s easy to drive and very simple in management and with very low costs. Furthermore, the creation of this category and the successive F. Regional has allowed the FIA to create and complete a pyramid of well-defined categories with the attribution of points for obtaining the super-license (F.4 - F.Regional, F.3 Inter. F.2), offering drivers a clear and well-defined path, where F.4 represents the first step. Compared to the past, it’s possible to start racing in F.4 at the age of 15, therefore with a trend of a few years earlier than in the past, but it’s also true that the preparation youngsters acquire in karting is much higher than in the past and they arrive extremely well prepared for the passage into single-seaters.»

One of the strengths of the car is the increased safety, imposed by FIA rules but also "taught" by some past accidents (think Hubert - Correa in 2019 at Spa, in F2) that have unfortunately made us more aware of side impacts. Can you tell us about it in more detail?
«Today, starting from the new 2nd generation F.4, safety has been elevated to the highest levels; it was unthinkable until even just a few years ago that an entry-level category like "F.4" could have this degree of safety; the crash tests and the tests to be sustained for FIA homologation are similar to those of F.1. The introduction of the Halo system, but also the new chassis rules and other related components, have unparalleled importance for the driver's safety. Credit to the FIA and credit to our designers who were able to integrate all these components in a car with a low final cost; we’re talking about 80,000 euros for a new complete car (ready-to-race) F.4 2nd generation.»

Which characteristics of your car can be compared to those of a kart, and in which instead do the two realities differ? In a hypothetical scenario with a kart (OK or KZ) at one end and an F1 2022 car at the other, where would you place your single-seater? Closer to which of the two worlds?
«Surely we are closer to the F1 world in terms of conception; the most similar feature of our F1 cars to the kart is certainly the simplicity of management and use, making them accessible to a large market of amateur enthusiasts.»

Which are the circuits where these cars prove to be more formative: the fast (F1-like) circuits or the more tortuous and driven small racetracks?
«A car like the F.4 is formative on all circuits; undoubtedly the kids coming from karting adapt immediately to the most tortuous circuits, but it takes only a few tests and they’re ready to become familiar with the fast tracks that represent their "dream"; the F.4, having a low and wished for aerodynamic load, refines the sensitivity and control on this type of circuits a lot.»

We come to the Tatuus T318 (the single-seater used in the W Series). Where does this car fit in the training and development path: how is it different from an F4 and how is it similar to a Formula 3 and Formula 2?
«It's a very important successive step for the drivers; many different factors contribute to their formative growth, more engine power, aerodynamic load, tire size, braking system, and international tracks, all characteristics they will find in the following formulas mentioned.»

Back on karting: in your opinion are these fully formed drivers or do you think that raising the age of the transition could put the youngsters in a better condition to then deal with the path to single-seaters from F4 and onwards? The trend does not seem to be reversible, at the moment: the theme being the educational value of karting (where you start extremely early) and the minimum requirements of these single-seaters.
«Starting very young in karts and with high-level programs, kart drivers arrive well prepared to F.4; my advice is to perhaps linger a few more years in the "propaedeutic" formulas to gain more experience and preparation, even physical, having the luck that F.4 and F.Regional give the opportunity to compete in many races and tests. Certainly, some exceptions (Verstappen) may have conveyed the message that one must arrive at the gates of F1 at 18 years of age.»
Who is Gianfranco De Lellis: President of the Group, he joined Tatuus in 1993 as co-owner of the company, and today he is the frontman of Tatuus managing the commercial aspects and customer relations. Tatuus is a partner of Autotecnica Motori: the result of a long-standing partnership that in the last 8 years has given birth to the first Generation F4 T-014, now replaced by the F4 Gen2 always powered by Abarth and in 2018 the Formula 3 Regional powered by Alfa, with the first Championship organized by Top Speed in Asia. It is a winning synergy that Tatuus consecrated about 4 years ago with its entry into Autotecnica Motori.