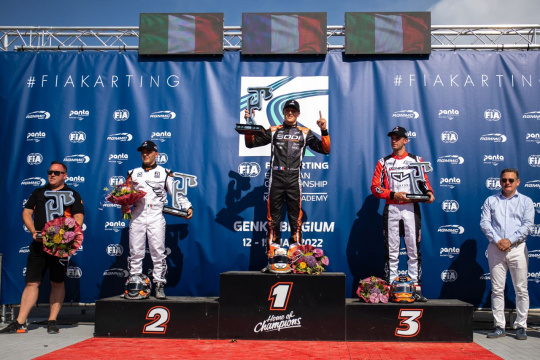 Author: Vroomkart International
It's a big party for the fastest Frenchmen in the queen class, two practically identical victories united by the same flag for Emilien Denner in KZ and Tom Leuillet in KZ2.
The first Sunday of the European KZ and KZ2 Championship goes in the archives with two finals, perhaps not unforgettable for emotions and twists, but certainly important and probably already decisive for the final classification. Same style and same result for Denner and Leuillet, unrivalled since yesterday with the ample confirmation today.

KZ2 - Masterpiece directed at Tom Leuillet
In the official presentations of well-known (especially Italian) singing competitions, it is customary to mention who sings and who conducts the orchestra. If you want to paraphrase this, today you can easily start with: 'For KZ2 sings Tom Leuillet, conducts Tom Leuillet'. A summary that gives the idea of the weekend packed by the French driver who is worth the lead in the classification. No twists and turns, yes, but lots and lots of substance from the Lennox Racing driver. Once the start was settled, Leuillet simply replicated what he had done during qualifying and the heats, with the only exception of this morning's Super Heat, which he undertook intelligently and without risks by finishing second. Twenty-three laps like a Swiss watch, travelling on the rails and gaining the usual cushion of two and a half seconds to be able to close the last corner with his fist to the sky in total ease. A weekend topped with the lead in the standings and the certainty of being able to play it all at Cremona. Nothing to do for a visibly displeased David Trefilov on the podium, thinking of a repeat victory in 2020 that did not come close, but with the second place leaves the doors open for more than possible twists and turns. Applause and incredulous glances for third position and the first FIA Karting podium by Dutchman Kris Hannen to the delight of Stan Pex's team. Seven positions were regained by the young driver, especially at the start. Markus Kajak and Arvid Lindblad complete a strong top five, but miss the appointment with the fight for success.

KZ - Denner and Sodi, now the favourites
First place in the OKJ general classification with Nathan Tye and now first place in the KZ general classification with Emilien Denner. These are the last weeks at Sodikart's house, definitely happy for the whole team. Even in KZ the emotions were not excessive, but the prerequisites for a great European Championship all appeared. In the first races of the current season, the French team had shown great solidity, albeit in historically favourable temperatures (not the almost 30 degrees of Genk for instance), with the scepticism of some people with respect to titled races. With a weekend like that, anyone who had doubts about Sodi's intentions for 2022 had to think again: they are now the main favourites.
Emilien Denner proved once again that he has a crystal-clear talent, the same one that led him to win and momentarily leave karting to return and return to the highest levels. Same script as yesterday for the Frenchman, who got off to a great start by understanding Ippolito's space and then off to the sound of fast laps and an increasingly important gap lap after lap. Perfect and flawless race closed in beauty with a three and a half second margin, useful to put the final point and fly to Cremona with the favour of the ranking.
Second place celebrated by Paolo Ippolito, rewarded for his consistency and speed, especially this morning after taking over the front row from Viganò after the Super Heat. It was precisely between Ippolito and Viganò that the only significant sparks of the race occurred, with the Lennox Racing driver recovering from Ippolito until the last corner of the last lap. Viganò, coming out of the hairpin better, tried the photo-finish blow for second place, missing it at the finish line by just +0.023sec. Yet another presence on the podium for Viganò in that of Genk, historical hunting ground, and together with Ippolito called to attack Denner in the Cremona stage. Fourth place for the eternal Jorrit Pex also one step away from the photo finish podium, fifth Pedro Hiltbrand. Travisanutto, Van Walstijn, Celenta, Pex and Renaudin completed the top ten.
RESULTS