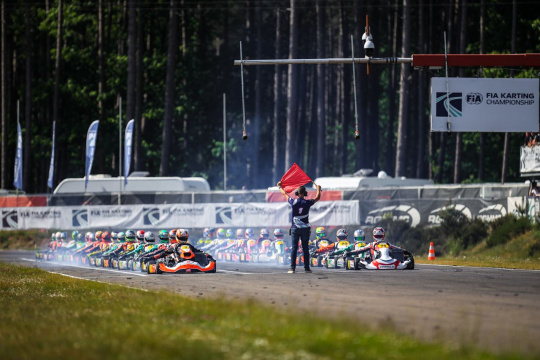 Author: Vroomkart International
KZ and KZ2 travelled hand in hand with an almost identical weekend for the two star drivers of the Belgian Saturday, Emilien Denner and Tom Leuillet.
There is only the French duo at Genk so far. Two clear-cut runs grabbing all the victories at stake today on the circuit in Flanders with practically summer temperatures, abnormal in these parts and at this time of the season.

KZ - The march continues, Denner remains firmly in the lead
To consider the weekend already archived would be a big mistake, especially given the history and unpredictability of KZ. What is certain is that in this way Emilien Denner is making it clear to his rivals that he did not spare himself at all today but, on the contrary, that he can still give something more. Data in hand, the French driver did not miss a beat in the three heats at his disposal in KZ, maximising pole position and a free track in front of him to get away and then control the race. Last "hurdle" before tomorrow's final, represented by the Super Heats scheduled in the morning and more crucial than ever. Denner in fact will have to watch out for his direct adversaries starting with Matteo Viganò, amply on his own standards here in Belgium with a third place and two second places. A satisfactory haul for the Lennox Racing driver, who, together with Denner, is in a position to make the gap, according to today's sensations. For the current third position, however, weigh instead the vicissitudes and battles on the track that currently reward Paolo Ippolito over Simo Puhakka. The Italian has three regular fourth place finishes to his credit, the Finn (currently in P10), is paying for a retirement this morning after a race contact compared to the excellent placings in second and third.
The second row of tomorrow's Super Heats will then be closed by one of the Pex brothers, this time Jorrit and not Stan who was delayed in the last heat. In any case, both Dutchmen in what is historically their 'backyard' remain very insidious. The top five is consolidated by Tuukka Taponen, who is also at ease in the brawls, and Francesco Celenta, who started with a 21st place yesterday and today is decidedly solid in third and fifth. Travisanutto, Hiltbrand, Renaudin and Puhakka close out the provisional top ten. Weekend uphill for Iglesias and Kremers both slowed down by retirements or race contacts, disqualification for Longhi after the second heat, having shown in any case to be able to recover positions lap after lap and return to the fight.

KZ2 - Leuillet takes the lead
The second place overall taken yesterday in qualifying by just +0.014sec must have charged up a sumptuous Tom Leuillet even more so far. He is marching like a worthy title contender with five wins out of five and practically all by a gap of close to or more than two seconds. It could probably already be the end for the Frenchman and nobody would have anything to complain about, but tomorrow will have to confirm what we have seen today, when it will be a manhunt for the rivals. It will be a three-way fight for the place of Leuillet's first antagonist with Markus Kajak, David Trefilov and Arvid Lindblad. The Estonian will open the second Super Heat from pole position thanks to three victories and two third places during the programme that have made him the best surprise of the Belgian weekend so far. Trefilov, as mentioned already among the favourites on the eve of the event, also had an excellent run, only held back by a fourth place more than his opponent. More detached in the scoring, slightly in trouble at some stages of the start, but absolutely protagonist of the afternoon was Arvid Lindblad, the first of the 'terrible rookies'. The Red Bull face took the luxury of winning the last two heats on the programme with fast laps, especially the last one which he won in a comeback with astonishing overtaking until the last corner of the last lap. In these conditions, Lindblad seems even more of a favourite than Kajak and Trefilov to be able to challenge Leuillet closely. Top five closed by Imbourg, to mention the good progression of Pescador with the first CRG in sixth place overall, victory in the last heat for Daniel Vasile of DR Racing.