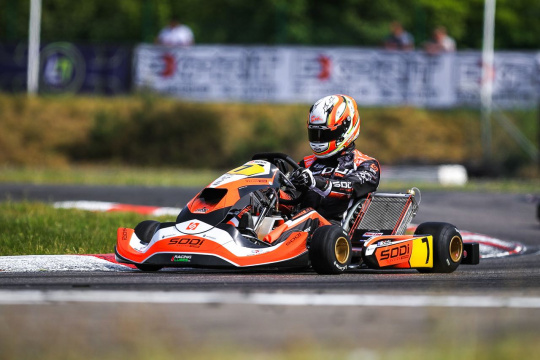 Author: Vroomkart International
The FIA Karting European Championship has also officially started for KZ and KZ2. On the kart track of Genk, first pole positions for David Trefilov (KZ2) and Emilien Denner (KZ).
Under the Belgian sun, the adventure of the queen class has finally got underway in what promises to be a European Championship more closely fought than ever. As we had already stated in our previews, the twists and turns were there and it was to be expected from the start. The first Friday of the year did not disappoint expectations with two rather interesting first classifications.

KZ2 - Trefilov, where he left off
After two years since the last Genk (European 2020), everything or perhaps nothing has changed to date with David Trefilov, the winner on that occasion, still ahead of everyone with the overall pole position in 50.812. Pole position pace maintained (and almost improved) only by Tom Leuillet with +0.012sec gap from the top. A nice duel between the two that will turn into a head-to-head battle as early as the afternoon with the first heats.
More "substantial" distances for the remaining group pole positions, led by Markus Kajak, author of a good time despite the first qualifying session of the day, for group C. Three more poles with a surprising Daniel Vasile first in Group D and with the fourth fastest time overall, captain of the return to the top for DR Racing. Also good was the time of German Dominik Reuters, the best outsider so far and in front for group E, last pole for Red Bull driver Arvid Lindblad in group F after his great performance in OK a few weeks ago at Zuera.

KZ - Denner what a lap!
Despite everyone's concerns about the grip conditions on the track, given by the passage of the Academy drivers shortly before, the KZ qualifying session lived up to expectations. Only time attack for the queen class, currently led by Emilien Denner author of the winning blow in 50.511 to the delight of the Sodikart men. A stratospheric time for the Frenchman, among the big favourites at the start of the season and more than ever projected towards the big goal. The new face of the French team confirms to be solid and well-built, confirming not only the expectations and performances already put on show since the beginning of the season, but also to be able to aspire to the grand slam considering the supremacy in the OKJ general classification.
Behind Denner, a completely positive Friday for a smiling Francesco Celenta, again on a high note with the second best time of the day and the first row in the safe. Among the confirmations also the pace of Matteo Viganò, as always among the best at Genk, third with the first Birel Art chassis and the first of Lennox Racing. Closing the second row at his absolute debut in KZ, the reigning OK Senior World Champion, Tuukka Taponen. No fears for the Finnish driver at the moment, ahead of far more experienced colleagues and best of the Tony Kart thanks to the +0.007sec margin over Simo Puhakka in fifth.
Sixth Ippolito, seventh the KZ World Champion Noah Milell, eighth Senna Van Walstijn, ninth and tenth position for Jorrit Pex and Adrien Renaudin. Not brilliant qualification for Longhi (P13) and Stan Pex (P15), seventeenth Iglesias, twentieth Kremers, all called for a comeback already in the first heat today.
FULL RESULTS