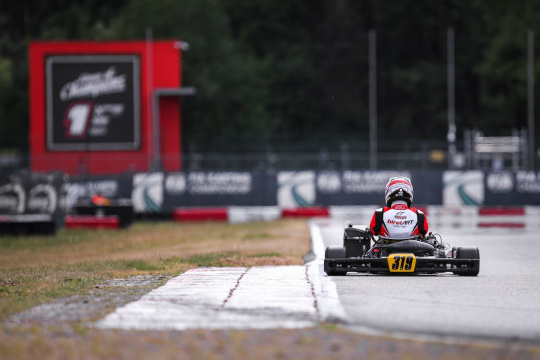 Author: Vroomkart International
The queen class returns to the Belgian circuit for the start of the 2022 European Championship, who will be the first leader?
Yet another chapter of history on the historic Flanders track, yet another great battle in the highest expression of karting. If OK and OKJ had opened the dances a few weeks ago at Portimao, then continued in Spain, it is now KZ's turn to take the stage and shine in front of the FIA-branded international audience.

As we have often said and affirmed, the formula of only two races to decide the European Champion perhaps takes away some of the spectacle that in the premier class should even be prolonged as in F1, but, despite this, expectations are high, very high for all the top drivers in the categories. Indeed, it is not madness to expect that whoever wins this weekend in Belgium will then be the main man to beat in Cremona, the last one before the end of the games. Hence, the entire KZ and KZ2 entry-list will try to place at their best in order to count on security in terms of points.

All eyes are clearly on Riccardo Longhi, who on the eve of the competition had said: "Between the tracks on the calendar and those on which I have competed in recent years, I say that I prefer tracks where you can take off more aggressively and bring out the quality of the KZ driver. Genk is a beautiful track of course, the unknown is the weather, personally I don't like it very much but it will be equal conditions for everybody. Among the KZ rivals there are many strong drivers, I personally believe that all our drivers can do their best. Obviously among the most competitive I hope I am - he laughs - I want to continue what I have done in these years and maintain a certain kind of competitiveness. As rivals, I think everyone up there is strong and fast, but personally when things start to count I say my partner Kremers. I always rely on him also because we both like racing together because we push each other, we both know each other's plus and minus points so I can only say him. The results we have achieved together in recent seasons speak for us".

A clear signal to the adversaries given by the reigning European Champion, the team's leading driver, who will still start as favourite together with his "cousins" Lennox Racing, already one step away from bringing home important trophies last season and sure of being able to count on Genk specialist Matteo Viganò, three times winner on the "Home of Champions". Besides the Birel brands, also CRG will want to have its say after the great close of 2021, as always starting from Jeremy Iglesias and all the new arrivals and confirmations in KZ2. Identical discourse for Parolin and Sodikart among the major constructors, with the latter on the wings of enthusiasm after the great start in 2022 with Denner and Van Walstijn and the all-round successes also in Presa Diretta. Among the new entries on the grid, also the reigning OK Senior World Champion, Tukka Taponen at his absolute debut.

KZ2 as usual full of familiar faces and, again, many rookies including some protagonists of the OK European Championship such as Birel Art driver Cristian Bertuca and Arvid Lindblad.
It is difficult to make predictions until tomorrow's first official free practice, starting however with that major suspect like David Trefilov already winner here in the last edition and Lorenzo Travisanutto, reigning World Champion with the new wording.

First round also for the FIA Academy Trophy, as usual following the KZ season from Genk until the rainbow weekend at Le Mans. The usual formula for the Trophy with a brand new entry-list full of interesting nationalities for the discipline. Also present are some, by now, well-known names with the protagonists of the OKJ European Championship, Dorison (FRA), Bouzar (LUX) and other drivers already on the FIA circuit including William Go, Caleb Gafrarar, Mathias Orjuela and Oliver Kinnmark and Jindrich Pesl.
With chassis and equipment totally one-make, the Academy is again aiming for a new name or names to emerge in the immediate future, preparing for hard-fought races with minimal gaps.

The weekend will officially start tomorrow, Friday 13 May, with official qualifying and the first heats. On Saturday 14 May and Sunday 15 May there will be Heats, Super Heats and category finals.

We also remind you that from the heats to the finals, the streaming of the weekend will be visible on the YouTube channel and on the fiakarting website.