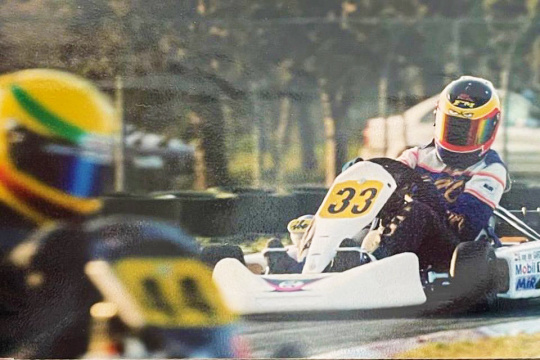 Author: Vroomkart International
If we think of a Dutch driver who has rivaled Hamilton, 100% of you would not think of Giedo Van Der Garde, winner of a Formula Super A World Championship in karts in 2002. His career towards Formula 1 was interrupted - forever - in an abrupt and unprecedented manner. (F.M)
And to think that Van Der Garde's karting career had ended under the best auspices: a World Championship won in Italy, for the CRG colors in the queen class where he had got the better of drivers of the caliber of Ardigò, Manetti, Beggio, and Quintarelli. In cars, his talent showed itself at times and perhaps not as consistently as one would have expected. After a good debut in Formula Renault (best rookie in Holland) the first years in F3 Euroseries did not give the hoped-for results, making the young star lose some of his shine.

The first important opportunity comes in 2006 when he drives for the Team that the year before had dominated the series with Lewis Hamilton but also in this case the expectations are slightly disappointed by a final result that was different from what one would have hoped for. These were the years of the "meteor" teams that did more damage than results in Formula One, including Super Aguri, with which Van Der Garde - who had earned some interest from several teams for a few years, being a member of the Mclaren Junior Drive Programme since 2006 - signed an agreement as a test driver. A role that he will not carry out because shortly afterward, at the beginning of 2007, another agreement will bind him to Team Spyker, another "bummer" of a team born from the ashes of Eddie Jordan's former team, which will not be able to field him in races due to Super Licence problems. Giedo thus falls back on the GP2 for 2009-2012.

Time passes and his debut in Formula 1 becomes increasingly more a chimera, but it happens in 2013, when Caterham, for whom he already runs in GP2 and has a contract as a test driver, will line him up alongside Charles Pic. The car’s scarce competitiveness will not give him any opportunities to shine if not in the qualifications of Monte Carlo, where he will get the best result ever in practice for the Anglo-Malaysian Team. The decisive year for Giedo seems to be 2014, in which a contract as a test driver with Sauber would seem to be able to put him in the section of the grid to which he has always aspired. There is also the contribution of a sponsor who seems to be able to guarantee him a place in the team as a starter for 2015, but things go differently: Sauber announces their two drivers, namely Ericsson and Nasr, giving the sack to Van der Garde who appeals through an international arbitration against the non-respect of the contractual terms.

The affair, which at that time had great echo in the media, ended with a severance agreement - in the order of millions of dollars - between the Swiss Team and the driver, but without putting an end to the dispute. Through his social media, the driver released bitter statements about his entire career, leaving a mark in all those who love motorsport but at the same time realize how much this sport and the huge business on which it is based foresee that one must, still, "pay to race":

«We have reached an agreement with Sauber and my contract as a driver has terminated by mutual consent. I am sad and truly disappointed. I have worked so hard throughout my career to live my dream of becoming a successful F1 driver. I hoped until the very end to show what I am capable of by driving a car for a mid-field team in 2015. My dream was taken away from me and I know that my future in Formula 1 is probably finished. I had a valid contract to drive in the 2015 season, and every right to enforce it. I did everything I could until last Saturday so that my right would be protected. This legal process started in 2014, but it only became public knowledge in the last few weeks, when we tried to force the team to respect the rulings issued by several judges. I am a driver and all I want to do is race. Despite this, the team principal was adamant, preventing me from doing so despite a series of rulings that proved I was right. I shall never be able to understand why. I could have insisted, but it probably would have prevented the team from racing, I could have ruined the careers of two young drivers like Ericsson and Nasr, and those responsible would have probably ended up in jail. I decided that I didn't want to live with this burden, even if the responsibility for all of this should be put on the team's management. I'm very grateful to my fans and to all the drivers and professionals who expressed their solidarity with me last week. But my career in motorsport is by no means over: I look to the WEC and the DTM with interest. Finally, I would like to address a message to the drivers, those who manage them, the team principals, and the bodies that govern Formula 1, so that new rules can soon be established to protect the rights of drivers. I would like that the values and business ethics applicable in any other sector could also be present in Formula 1. I hope that my case can serve as an example so that a similar solution is never repeated».

Today Giedo still races out of passion in endurance races and in IMSA, as well as being a well-known face on Dutch TV for Formula 1 reports - a sport that has become extremely popular in Holland thanks to the first Dutch Formula 1 World Champion who shared with Giedo the coach on the track at the time of karting, a certain Jos.