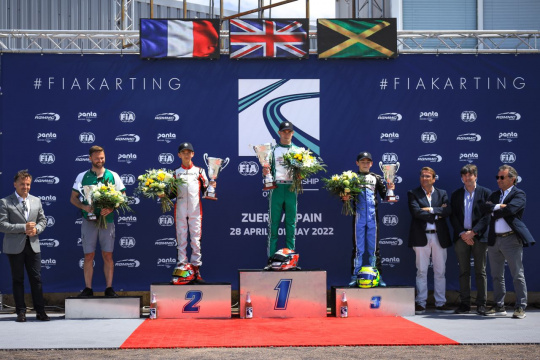 Author: Vroomkart International
Double British victory at Zuera thanks to the first positions of Joe Turney in Senior and Nathan Tye in Junior.
The second weekend of the European Championship thus ends on the International circuit of Zuera, two victories arrived after an almost absolute domination on both sides, general classification rather revised, especially after the heats and finals.

OK - Turney wins and runs, Lindblad is back
Joe Turney completes the work by taking his second win of the season, the first one obtained "on the field" and in a perfect way. The Englishman struggled for only four laps before he was able to concentrate on the pace of the leader, thanks to the initial tussle with Enzo Deligny who started well, unlike Taponen who was sucked in after the start. The Frenchman gave Turney a hard time, overtaking and defending until he had to give up the first position after the surgical overtaking of his colleague. The real race then moved all to the back positions with the scrum pack opened by Deligny and closed by Lindblad with Nakamura-Berta, Gomez, Powell and Eyckmans among them. A few phases of study and rapprochement and then the move that broke the bank was Powell's brilliant breakaway that took away the position from Nakamura and Gomez in one go, who were busy defending in the most effective way. Powell's spark then ignited the fire of Arvid Lindblad, who was able to close the gap from seventh position, to the tune of fast laps and overtaking attempts (and successes) at the slightest opportunity. Overtaking Powell as well, and climbing onto the podium, Lindblad then chased down Deligny for second place, propelled by a series of incredible fastest laps. A few laps and nothing more were enough for Linndblad to overtake Deligny and put himself further in the hunt for Turney who was too far behind on the laps he missed. Under the chequered flag it was only three tenths that saved Turney from what was, by all accounts, Lindblad's perfect race. A race compromised (once again) in the parc fermé with the five-second penalty for misplacing the spoiler, going from a masterful second place to an undeserving ninth. Arvid Lindblad, despite the bitter taste in his mouth, showed that he is back in great shape after the injury of Franciacorta, a fact not to be underestimated for future occasions. Podium completed by Enzo Deligny in all cases great protagonist of the weekend and Alex Powell, fourth Nakamura and fifth Gabriel Gomez. Thanks to the victory also at Zuera, Joseph Turney digs even deeper the advantage in terms of points with two races still to run.

OKJ - Tye, surprise announced
The new ace of the Sodikart house has a precise name, Nathan Tye. The Briton is certainly not emerging today but he certainly scored his first victory in the FIA Karting sphere. Already at the weekend of Portimao, the Briton had shown off his skills by not losing the train of the firsts and studying the top ranking. On a track favorable to him as that of Zuera, interpreted masterfully, has placed the kick that could already be decisive for the ranking in the darkest weekend for direct rivals. A great start for the Sodikart driver, who moved from third to first position at the end of the first lap and then put his escape plan into action. Behind the English, meanwhile, fratricidal fight between two new names and unpublished, both for Tony Kart, or Enzo Tarnvanichkul and Arthur Dorison. The duo in the first fraction of the race was literally glued to Tye (in any case superior), enough to make a vacuum on the rest of the group. From the second half of the race onwards, the bad idea of overtaking each other at regular changes, useful to increase the gap to Sodikart despite both Dorison and Tarnvanichkul have repeatedly made the nod to follow each other to close the gap. Moves that if on the one hand have allowed Tye to escape with ease, on the other have kept the group compact allowing from fourth to eleventh place to return compact, especially Renè Lammers. On the last lap Tarnvanichkul's final attack on his team-mate Dorison for second place was almost a gift for Lammers himself, just a few metres from the deceptive overtaking of Dorison. Further on the triumphal march of Nathan Tye with a three and a half second margin and the awareness of being able to fight by taking the French team to the first place in the general classification. Only 12th the by now ex-leader Dmitry Matveev, bottled up in the fight in the top ten and then penalized of five seconds for the positioning of the front spoiler.
FULL RESULTS