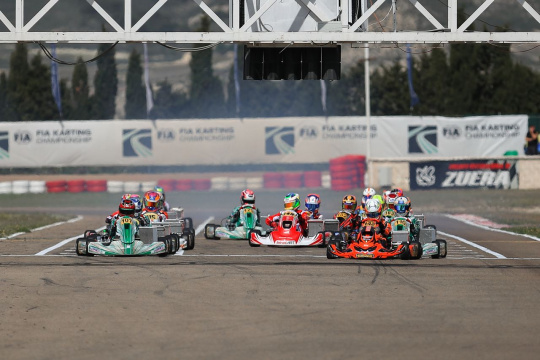 Author: Vroomkart International
On Saturday in Zuera everything happens on the track, besides the sporting battles in the heats also the red flags caused by big accidents in Junior.
The programme was delayed, especially after the first red flag in OK Junior and ended a little while ago with some frontal changes in view of tomorrow.

OK - Turney back in the lead
A not entirely brilliant qualifying yesterday, however, has not compromised the great race pace of Joe Turney, back to the leader of the standings at the end of the heats. Five wins out of five represent not only great competitiveness but a clear proof of strength and a signal sent directly to all rivals: Turney will be the man to beat.
Tuukka Taponen also made a great recovery, moving up to second place behind his teammate with four wins and one third place too many, in all cases valid for the pole position of the second Super Heats.
Third place is confirmed in the hands of Kean Nakamura-Berta, who is on the lookout right from the start of tomorrow's Super Heats against Turney. Deligny fourth overall and Egozi dropped to fifth place are also in good waters.

OKJ - Dorison leader, scary front in mid-afternoon
The Junior was certainly the protagonist of a difficult afternoon, especially in terms of accidents and red flags. The most violent and really scary bang occurred in the E-F heat after five laps. A hand-to-hand duel between Matveev and Bondarev triggered the carom. The Russian driver, who came out of the last bend slower, was joined by Bondarev in the last half-bend before the outer straight. Matveev's wide trajectory forced Bondarev to take two wheels off the rubberised section, traversing towards the inside of the track. In order to dodge his colleague, Matveev ended up hitting first Molnar on his left and then Bondarev again on the right, taking off over his rival's helmet, sending him into a tailspin on the main straight. With Bondarev at a standstill, there was fear in the group behind him, who were able to dodge him but not completely. Finnish driver Dahlstrom, whose visibility had been obscured until just a moment before, had no choice but to hit Bondarev head-on in a terrible head-on collision. Consequences for both drivers, who were conscious but both in hospital. From the first testimonies collected on the track, it would be two fractures for the Ukrainian driver (nose and leg), fracture of the leg also for Dahlstrom. Data to be verified.
After the interruption of the race and the wait, in the next heat another accident between Verbrugge and Skulanov with possible consequences to the wrist to be verified for the latter.

Returning to the sporting side, Arthur Dorison with four wins out of five is in pole position for tomorrow's SuperHeats. He is closely followed by Guillaume Bouzar, yesterday's poleman and positive again today with two heats won. Zac Drummond and Enzo Tarnvanichkul close the first two provisional rows. Fifth Nathan Tye, the best placed in the overall points classification. Twelfth provisional place for Matveev, at least for now. The Koski Motorsport driver's weekend could have repercussions after the afternoon's accident.

Live timing and streaming of SuperHeats and Finals tomorrow on fiakarting.com.