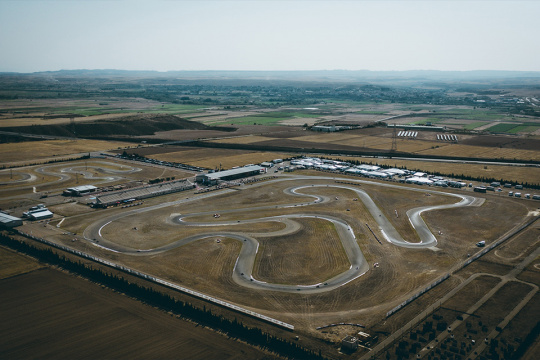 Author: Vroomkart International
The continental season gets into full swing, after Portimao it will be Zuera's turn to host the best of the Junior and Senior classes. The fight at the top is beginning to take shape.
If the Portuguese weekend had (finally) opened the dances of the 2022 season, a little further on, precisely near Zaragoza in Spain, the second chapter is ready to be written.

Between Portimao and Zuera, the OK and OKJ classes were able, as usual, to test and try to iron out the last details during the Champions Of The Future, obviously on the Spanish circuit. A good way to start drawing some sums just before the official start of the second FIA Karting round.

OK Senior
After the disqualification from the classification of Portimao for Artem Severiukhin (on whom there is no other official news as yet, pending the FIA) regarding the gesture on the podium, it is Joe Turney who leads the general classification.
The Englishman will therefore have a golden opportunity at Zuera to increase his advantage after his leap from second to first position at Portimao and his increase in points. Turney collected a fourth position in the final of the COTF, not far from the top and in any case starting from pole position. Symptoms of clear competitiveness and feeling with the Spanish track, never easy to interpret. The Englishman will have to watch his back against an ardent Kean Nakamura-Berta, promoted to third place in Portimao and above all winner in a comeback a fortnight ago in Zuera. For the Japanese driver the moment of complete consecration (after winning an OKJ World Championship title) could have arrived also in the Senior category, with a strong position in the fight for the European title. Head to head that could see the inclusion of other protagonists, including Enzo Deligny, brilliant and skilled in the melee and Tomass Stolcermanis ready to return to the top after a missed podium in Portimao, due to a penalty for the positioning of the spoiler.

OK Junior
Dmitry Matveev, up to this point of the season, has shown himself to be approachable yes but untamable in the fight for victory. The Russian driver was able to win defensively in Portimao, collecting the first victory branded FIA Karting, a feeling that will do everything to riassaporare also in Spain after having triumphed in the preparation race. Matveev's schedule was tight and without mistakes, rewarded and above all concentrated in the crucial moments.
In the exciting final of Portimao, in addition to Matveev also Anatoly Khavalkin had proved up to the situation and probably the only one who could beat his compatriot. As a first twist of the upcoming weekend, Khavalkin himself will not take part in the Zuera race due to some bureaucratic problems related to his Russian passport and ongoing issues. A zero that could be as heavy in the standings as not, making the last two races on the programme (Kristianstad and Franciacorta) even more crucial. Also expected for the Spanish weekend is Nathan Tye, several times "the third quarreller" and constantly in the fight for the top ranking, the same goes for Renè Lammers.