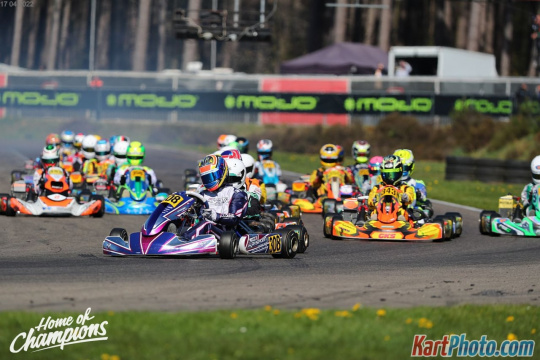 Press Release by: BNL karting series
With a very healthy 193 entries at Karting Genk for the first round of the 2022 BNL Karting Series season, the Easter sunshine over the course of the weekend saw plenty of racing action at the world-renowned Limburg circuit, with drivers looking to cement their place in the championship standings.
In Micro MAX, there were plenty of surprises including a maiden international pole position for Jack Freeman (GBR)on Saturday, along with some brilliant close quarter racing. However, Senn Lindemann (NED) would end up winning three of the four races over the course of the weekend to hit the top step of the podium.

Grand Kick-Off winner Vic Van Campenhout (BEL) would also be in the mix, but an unfortunate error through turn 12 on Saturday’s Pre-Final dashed any hopes of the weekend win. He would still take two second places and a win to cement second, ahead of Freeman. The Netherlands’ Lieke Van Boekel also consistently ran in the top four, taking two third place finishes in the process to secure fourth, ahead of Denmark’s Andreas Kjellerup.

The Netherlands’ Boaz Maximov started off his title hopes with a perfect score on the Saturday, picking up two wins on Saturday, before a further two second places puts him at the top of the standings. Countryman Max Sadurski would end up second overall after a second, a third and two wins, which saw him battle hard but fair with Maximov and Belgium’s Alexander Van Meeuwen, who completed the top three.

France’s Victor Galmiche also showed a great turn of pace throughout, running in the top five and even challenging towards the sharp end of the field, followed by another Dutch driver in the form of Mats Van Rooijen, whilst Rory Armstrong (GBR) would be only four points away from the top five after a sterling effort.

With 48 drivers in the Junior Rotax ranks, it would only be the top 36 that would make it through to the Pre-Final and Final on the Sunday. Grand Kick-Off champion Ethan Jeff-Hall would make sure he would hit the top step of the podium by winning both races, having started in the Pre-Final tenth. Denmark’s Mikkel Pedersen was able to take advantage of misfortunes for others including overall pole sitter Austin Lee (GER) and Vinnie Phillips (GBR), with the JJ Racing driver securing second.

It was a better run this time for Kasper Schormans (NED), who was also in the train of multiple drivers that were in clear contention, as the #240 would secure fourth places to round out the podium. Croatian racer Leon Zelenko would be one to watch as well, taking third in the Pre-Final, before a ninth place finish in the Final would put him one step away from third, finishing ahead of Belgium’s Lawrence Herbots.

There was also a Junior B-Final which saw the remaining 12 drivers race for some well-deserved silverware, with Puck Gubbels (NED) winning the 15-lap race by 1.881 seconds ahead of Leandro Fischer (GER), with Luca Breemer (NED) completing the podium.

A total of 68 drivers comprised of the Senior Rotaxcontingent, with one driver dominating proceedings in the form of Belgium’s Kaï Rillaerts, showcasing his impressive adaption to the class. The #374 would take overall pole, before a clean sweep was witnessed by all in attendance, as he won all three of his Saturday heats and both of Sunday’s races. Two-time defending champion Sean Butcher would end up second on the podium, having secured second and third on Sunday.

A one-off appearance for Eliska Babickova (CZE) see her take away some welcome silverware, as her combined efforts on the Sunday, which included a second place in the Final, put her on the final step of the rostrum. Germany’s Janne Stiakwas also very well noticed during the event, taking fourth ahead of a resurgent Ehad Turker (TUR), who finished ahead of Canada’s Jason Leung and defending RMCET champion Callum Bradshaw (GBR) who were all tied on points.

More silverware was provided to the Babickova family as 2022 W Series driver Tereza was also in attendance to support her sisters, as Petra in the #358 entry would win the Senior B-Final by 1.252 seconds in front of the Danish duo of Oskar and William Kristensen.

Glenn Van Parijs would again have his work cut out in the opening round of the season, as luck was very much on his side when it came to the younger challengers to his DD2 crown. But the Belgian would also keep his consistent run of form to end up taking two wins, a second and a third place finish to hit the top step, in front of Mark Kimber (GBR), who was only five points adrift.

Estonia’s Ragnar Veerus would have a good way to round off a birthday week, as he would win the last race on Sunday to hit the final step of the rostrum. Other drivers to watch out for this year are the returning Kris Haanen (NED) and Germany’s Laurnec Seifried, who initially finished first and second in both respective races on the Sunday, along with 2018 and 2019 DD2 champion Xander Przybylak.

In DD2 Masters, it was another Belgian hitting the top step of the podium, as it was a whitewash by Ian Gepts, who took a maximum score of 100 points to not only win the weekend, but lead the standings after the opening round. It was close for second and third, as last year’s RMCET Paul Louveau would oust Germany’s Michael Becker for second by just one point, despite the latter’s best efforts on Sunday with two second place finishes.

Christophe Adams, who has now switched to Sodikart for 2022, would take fourth, five points ahead of DD2 Masters Kick-Off winner Luca Filippone.

The BNL Karting Series now has a little bit of a hiatus, before the series returns to Karting Des Fagnes at Mariembourgbetween July 3rd and 4th, marking the official halfway point of the season.