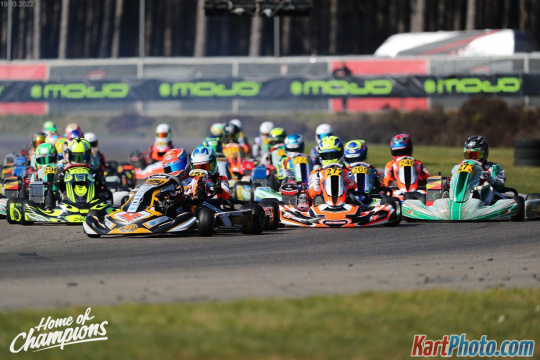 Author: Vroomkart International
A few weeks after the BNL Karting Series hosted its Grand Kick-Off at the iconic Karting Genk circuit, this coming weekend sees a bumper grid ready to go into battle for the first of three meetings in the 2022 racing calendar.
With over 190 registered drivers that cover the span of all six Rotax-powered classes, it is going to be a very busy time over a very compact two days of racing at the 1,360-metre track based in the Limburg region.

As with every season, there are many changes, with drivers moving up classes and switching teams, but there will be no shortage of close-quarter racing and fantastic battles for those watching the action closely.

Micro MAX will have no defending champion this year, as Dutch driver Tom Papenburg is now racing elsewhere, but there are several drivers that could be a clear favourite based on the Grand Kick-Off, including Belgium’s Vic Van Campenhout, Finland’s Oiva Vettenranta and the Netherlands’ Lieke Van Boekel.

Mini MAX will also have some fantastic talent on display, but will be without Mateja Radenkovic, who secured the title last year. Max Sadurski, Mats Van Rooijen and Boaz Maximovmake up just part of the hefty Dutch contingent that will be in the mix, but several new talents will also join the fray.

Junior Rotax has almost 50 drivers registered, and will also be as close as ever. The British pairing of Ethan Jeff-Hall and Vinnie Philips have already given the rest of the opposition something to think about after the near photo-finish that we saw back in March. But Tommie Van Der Struijs will, along with Austin Lee and Kasper Schormans, make sure that they don’t have it all their own way.

Sean Butcher will make his return to the series as the defending two-time champion, and will be the driver with a target on his back. Drivers including Lachlan Robinson, KaïRillaerts, Dylan Lahaye, Callum Bradshaw and Lewis Gilbert will provide a stern test for the Briton, who will look to make it three successive runs to the championship crown.

Glenn Van Parijs is the benchmark in the DD2 class, but two-time RMCGF champion Mark Kimber made a distinct impact last month to show that his skillset can’t be denied. The returning Kris Haanen also showed that he is not one to be counted out, along with the ever improving German driver Laurenc Seifried, Latvia’s Patriks Noels Locmelis and Estonia’s Ragnar Veerus.

DD2 Masters sees another change for reigning champion Carl Cleirbaut, who has switched to SP Motorsport for this year, but fellow Belgian Luca Filippone was the driver in the spotlight at the Grand Kick-Off. Michael Becker and Christophe Adams also return, along with last year’s RMCET champion Paul Louveau looking to make his mark on this internationally-recognized series.

It all kicks off this Saturday morning in Genk, with timed qualifying starting proceedings ahead of 29 races in total, where the action will be plentiful at the beginning of the BNL Karting Series’ 15th season!

At the moment there is no other news about this event ... stay tuned!